Get the app Get the app
Get the latest news on coronavirus impacts on general aviation, including what AOPA is doing to protect GA, event cancellations, advice for pilots to protect themselves, and more. Read More
Already a member? Please login below for an enhanced experience. Not a member? Join today
News & Videos Birds a billion dollar hazard

An April accident in Alaska that claimed four lives may have been the first fatal crash caused, at least in part, by a bald eagle, though it was far from the first encounter between a general aviation aircraft and the national bird. Wildlife strikes of all kinds continue to increase despite efforts to keep critters away from airports, and the estimated damage done, in dollar terms, is fast approaching $1 billion annually. 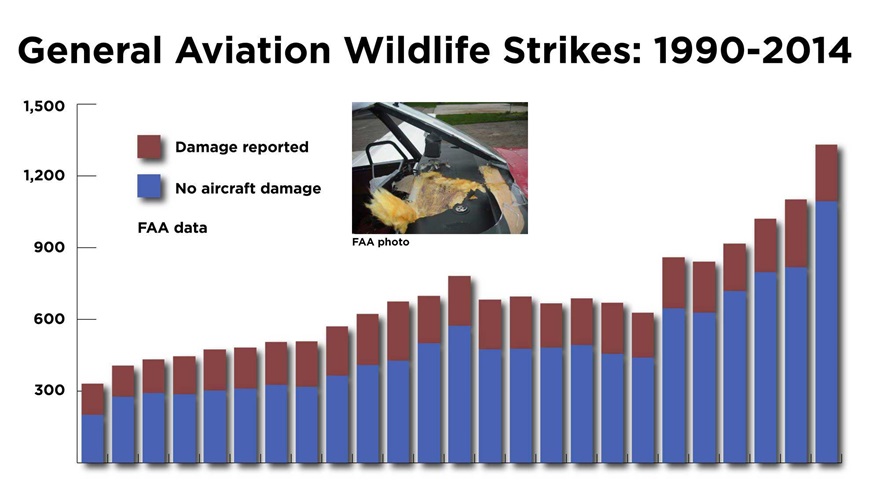 Wildlife collisions have increased worldwide since 1990, and are more likely to cause damage to smaller aircraft. This graph is based on FAA data.

NTSB lead investigator Shaun Williams said in a recent telephone interview that it remains unclear what role, if any, the collision with a young bald eagle played in the fatal crash on April 20. The pilot was former NTSB investigator George Kobelnyk, an airline transport pilot and the registered owner of the Cessna 172, which was conducting a photo flight near Birchwood Airport in Chugiak, Alaska. According to the preliminary report, Kobelnyk departed just before 9 a.m. under an 8,000-foot overcast with nine miles visibility. The Skyhawk made several low passes over the survey area near the airport before crashing and bursting into flames in a densely wooded area.

Williams said the post-crash fire destroyed much of the evidence that might help explain the loss of the aircraft and four occupants. They were, according to the Alaska Dispatch, Kobelnyk, 64; Christian Bohrer, 20; Sarah Glaves, 36; and Kyle Braun, 27. An examination of the tail section found residue that was tested by the Smithsonian Institution, and determined to be the remains of an immature bald eagle. Whether the eagle actually entered the cabin, or what role it may have played in the crash, remain to be determined, a process that may take months if the answer can even be found. But Williams said that regardless of the eagle’s specific involvement in the crash, the threat of bird strikes has been increasing.

“That’s why we didn’t wait,” Williams said of the unusual announcement of early findings from an investigation that is “still in its infancy,” adding, “There’s been an uptick in bird strikes in the area, particularly the last few weeks.” 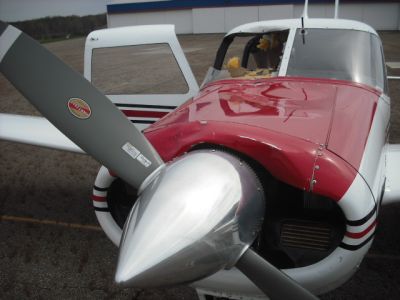 Wildlife encounters increased sharply between 1990 and 2014, according to a report jointly published in August by the FAA and the U.S. Department of Agriculture. Some of that increase likely results from streamlined reporting procedures (reports have been collected online since 2001), though increases in bird populations (birds account for 97 percent of all wildlife collisions with aircraft) and other factors such as land development are also believed to play a role. The report notes an estimated $208 million in damage-related costs and losses, and 172,151 hours in aircraft downtime in 2014 for civil aircraft; the website of Bird Strike Committee USA notes an estimated total of more than $900 million in damage done in collisions between wildlife and U.S. aircraft including both military and civil operations. Worldwide, more than 250 people have been killed as a result of wildlife strikes since 1988, the organization (composed of government agencies and industry groups) notes.

Seasonal migrations from July through November increase the risk of bird strikes, most of which happen at or below 500 feet during approaches to airports. Pilots can also expect a higher probability of bird encounters when flying along the major migration routes, which are detailed in the AOPA Air Safety Institute Safety Brief on the topic. Additional information is also available from AOPA on this page.

Birds have posed a threat to aviators since the beginning of powered flight. Orville Wright was the first pilot to report a bird strike, in 1908, and Cal Rogers was the first to die following a bird strike, losing control over his Wright Flyer during a 1912 demonstration flight.

More recently was an Illinois pilot’s dramatic encounter with a Canada goose in 2014 (which was captured on video), though Keith Baird and his passenger both escaped injury when the goose passed between them after coming through the windshield.

Bald eagles, which typically weigh 6 to 14 pounds as adults, are among the large bird species that create the greatest hazard for aircraft, and while they are most common in Alaska, they can be found across the country. The FAA Wildlife Strike Database has recorded 217 collisions between aircraft and America’s national bird since 1990, of which 24 resulted in substantial damage to the aircraft involved and two led to destruction of the aircraft.

The April 20 crash in Alaska is not yet logged in the database, though other incidents follow scenarios that may be similar. In July 2007, a Cessna 182 was destroyed after swerving to avoid a bald eagle while on short final into Matinicus Island Airport off the coast of Maine. The pilot and passenger suffered only minor injuries, but the nosewheel or propeller struck a tree, and the aircraft crashed next to the runway. In another incident, with no location noted, a flight instructor landed a Piper Cherokee after striking a bald eagle during an instructional flight. The impact left a large indentation on the horizontal stabilizer, and bent the stabilizer to the point it impeded the rudder. The insurance company ruled the aircraft a total loss. The damage done to these and other aircraft involved in bald eagle collisions was costly, $25 million in all, adjusted for inflation, though most collisions with bald eagles (about nine of every 10) resulted in minor or no damage done. That number is skewed by the high percentage of bald eagle strikes involving large transport aircraft that are less likely to be damaged by hitting a bird that size. General aviation aircraft have been involved in more than 17,000 wildlife strikes since 1990, and 29 percent of those resulted in aircraft damage. 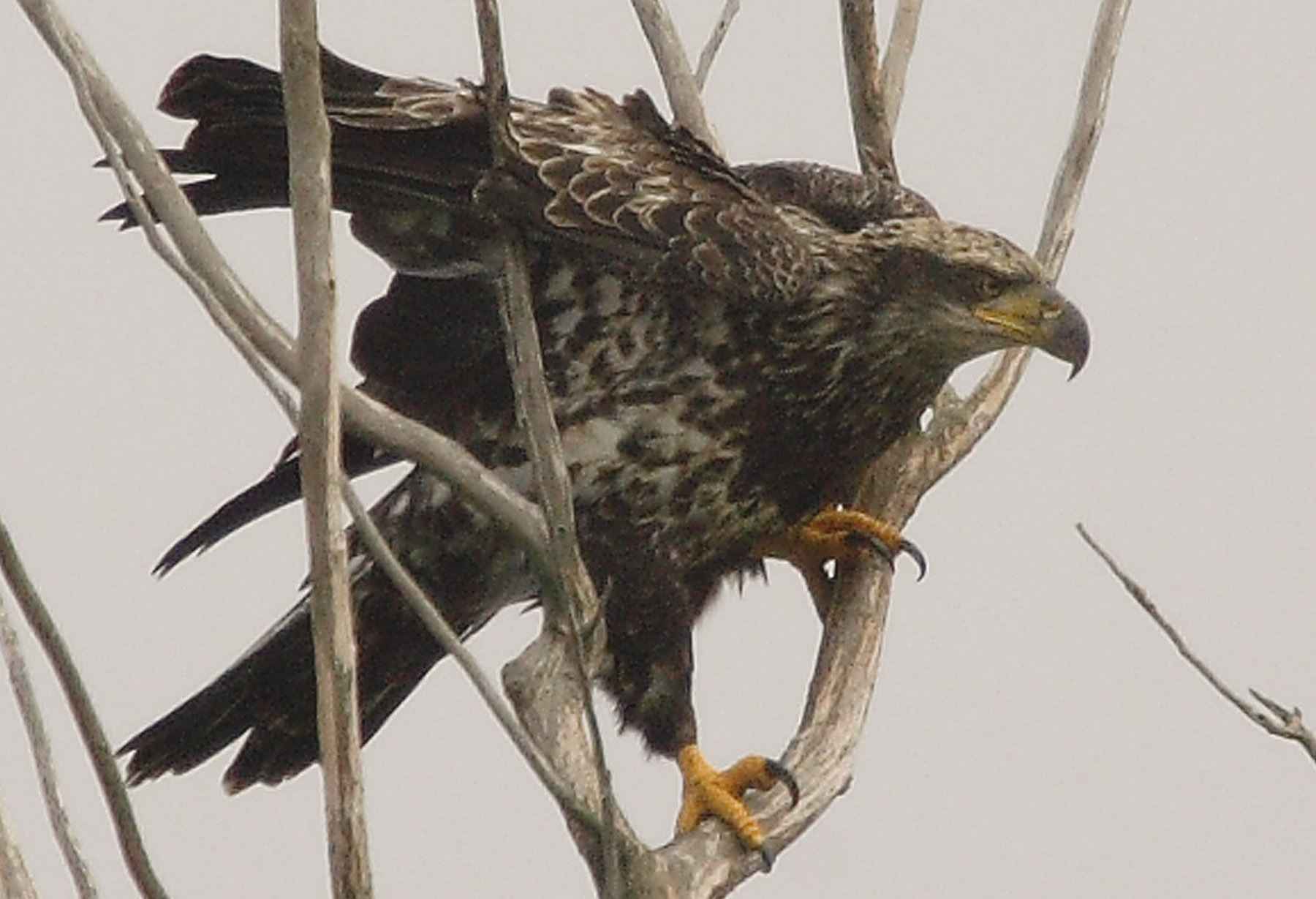 While Alaska has recorded 61 bald eagle strikes since 1990 (excluding the April incident), Florida is not far behind with 54; the rest are scattered around the Northeast and Midwest, primarily, including eight in the District of Columbia.

The FAA and USDA are both working to reduce the growing threat posed by birds.

In Alaska, the USDA effort to reduce the bird threat is led by Marc. W. Pratt, district supervisor for the agency’s wildlife operations. Pratt said in a telephone interview that trained biologists are stationed at more than 130 airports nationwide, helping to guide local efforts to keep birds at bay. Such efforts can include removal of food sources (planting grass that birds don’t like is one such approach), noisemakers, and even dogs, in the case of a Michigan airport where the bird-chasing border collie Piper has become an internet celebrity.

Chasing eagles away from airports is more labor-intensive in Alaska, Pratt noted, and more restricted by federal laws and international treaties. Only in the past few years has it been possible to legally remove an eagle nest built dangerously near an airport, Pratt said (a measure taken only if the nest is unoccupied). As many as 20 such nest removals have been conducted in recent years, following careful observation by trained biologists who have the local knowledge to know which nests pose a threat to aircraft operating nearby.

“What we’re trying to do is through harassment, or hazing, we’re trying to make that airport environment as uncomfortable as possible so that they don’t want to be there,” Pratt explained. “Through persistence, great persistence, we’re able to eventually convince them to go nest somewhere else. It has been fairly successful.”