Get the app Get the app
AOPA Members DO more LEARN more SAVE more - Get MORE out of being a pilot - CLICK HERE
News & Media 9/11 remembered: Behind the scenes of the FAA and AOPA

9/11 remembered: Behind the scenes of the FAA and AOPA

The Sept. 11, 2001, terrorist acts claimed nearly 3,000 lives and brought air traffic nationwide to a halt. AOPA immediately jumped into action to fight for general aviation pilots to be able to return to the skies. AOPA Vice President of Government Affairs Melissa Rudinger essentially lived at FAA headquarters for weeks following the attacks, advocating for GA. She takes you inside those dark days to reveal what the association did for GA. 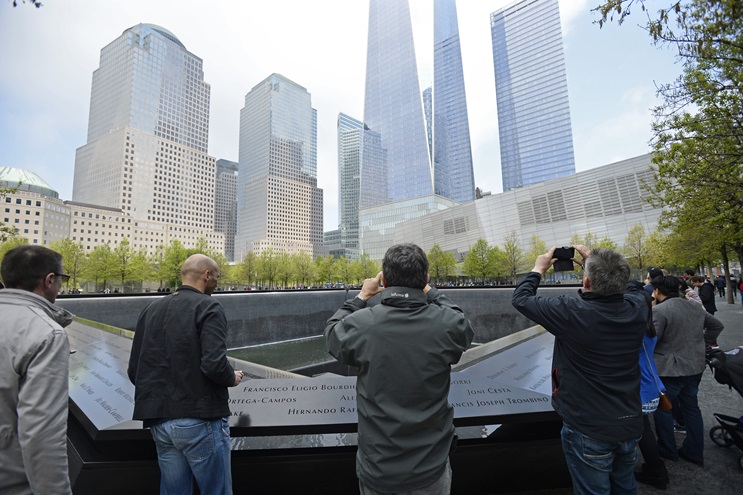 “A bunch of us heard about it when the first plane hit,” recalled Rudinger, who was AOPA vice president of air traffic services at the time. “Everybody at first thought it was a small airplane and there was a lot of confusion.” Initial television images showed an aircraft slamming into the World Trade Center but its size and identity were not immediately known.

“We gathered in a small room and were watching television when the second airplane hit” the South Tower, Rudinger said. “That’s when we realized, ‘Oh my God, this is an attack.’ We watched in disbelief.”

After the National Airspace System was shut down, aircraft and pilots in transition around the country were effectively stranded and GA operations were scuttled as security officials scrambled to develop a plan.

After the second airplane hit, Rudinger dialed the direct cell phone number of a key FAA contact who was assigned to the air traffic control system’s command center. The contact put down the phone but accidentally didn’t disconnect the line. Rudinger said she could hear what was going on inside the facility known as the agency’s “brain, where all the decisions are made” while the chaotic events unfolded. “Right around that time the call was made to ground all air traffic and we knew it was serious.”

National Security Agency archives list 4,546 airborne flights when the order was given at 9:45 a.m., and three minutes later the Capitol and the West Wing of the White House were evacuated.

The news enveloped AOPA’s Frederick, Maryland, headquarters as massive flight restrictions quickly rolled out. “It was unprecedented,” Rudinger recalled. “I don’t think any of us conceived of what was coming.”

Former AOPA President Phil Boyer dispatched Rudinger to the FAA building with instructions not to come back until she had answers. “We were just trying to assess the situation and AOPA members were calling us asking for help.”

Two days passed while all aviation besides military, law enforcement, and emergency-related operations was halted.

“On the second day it suddenly became horrifyingly apparent we would be grounded and there wasn’t a whole lot of thought about GA,” Rudinger said. The association was already working around the clock to find relief for hundreds of pilots who were stranded outside of their home base.

Confusion reigned as restrictions popped up and then went away; sometimes even flight service station personnel didn’t have the latest information. By this time Rudinger, the sole GA representative, had taken up residence in an office within the FAA command center and blended in with officials who assumed she was a government employee. She basically camped out at the command center for nearly six weeks as the association helped lift aviation restrictions little by little.

She said AOPA’s advocacy role rapidly evolved from assessing what was happening to “communicating clear and concise information” about the status of the airspace system in the days and weeks following the 9/11 attacks. Most importantly, though, AOPA began working with the Department of Defense, the FAA, and other security interests “to immediately get GA flying again.”

AOPA staff faced a continuous uphill battle, Rudinger said. “There were days when we were there 20-22 hours and we just took cat naps here and there. A couple of nights I slept on an FAA employee’s couch and I wasn’t the only one.”

Rudinger said it was apparent that amid heightened security concerns and continuing confusion, “GA would be pushed to the sidelines with no attention to the fact that we had pilots grounded nationwide and couldn’t get home.”

Individual waivers were issued to pilots to gradually migrate them home as airspace returned first for commercial traffic, then IFR operations, agricultural and aerial photo operations, and then finally VFR traffic and flight training.

Airspace known then as “enhanced” Class B was rolled out at 30 major metropolitan areas to provide some relief to pilots in big cities. Because of ongoing security concerns temporary flight restrictions were put in place over nuclear facilities and professional, collegiate, and high school sporting events, which also referred to “any other major open air assembly of people.” Because those areas were largely uncharted, pilots had a hard time determining where they could or couldn’t fly.

Meanwhile, a tug of war cropped up between the FAA and the National Security Council (and other law enforcement entities) about designating permanently prohibited airspace. By late September the situation was dire. “There was a looming threat of permanent prohibited airspace over every single major metropolitan area, professional sports stadium, nuclear power plant, military installation, oil refinery, and water reservoir,” she said. The restrictions were in the final approval stage and close to being charted. A notam had already been crafted by the government and was ready to be sent registered mail “to every pilot in the U.S.,” she said.

“It was the biggest battle of my career. It was scary and I thought, ‘We’re never going to recover because of this.’ It really was horrifying.”

After several weeks of discussions and compromise with the FAA and others, AOPA’s diligence had begun to reap rewards and the government eventually abandoned its onerous plans. “They realized that the restrictions in place immediately following 9/11 did not make sense for long-term or permanent policy,” Rudinger said.

She pointed out that one important security enhancement that grew from 9/11 was AOPA’s Airport Watch Program. The nationwide program, formed in partnership with the Transportation Security Administration, offers pilots a centralized toll-free hotline (866/GA-SECURE) to report suspicious activity at airports. The program also provides a convenient tool for educating security agencies and government officials on the value of working together to protect and preserve the aviation industry.

Not every battle was a win, however, cautioned both Rudinger and Nobuyo Sakata, AOPA’s government affairs director of aviation security. As a precursor to the Iraq war in 2003, the FAA established the Washington, D.C., Special Flight Rules Area. Despite overwhelming opposition from GA pilots, the FAA made the area permanent in 2008. Temporary flight restrictions over Disney theme parks also became permanent by language inserted into a 2003 budget bill passed by Congress.

Although numerous regulatory and voluntary actions that many pilots refer to as the “new normal” were implemented to enhance GA security, “we have persevered as an industry and preserved our freedom to fly,” Rudinger said.

“We have come a very long way since those dark days of 2001,” Rudinger recalled. “It took almost two and a half years of aggressive lobbying to reach the post 9/11 airspace environment that we enjoy today.”

Sept. 11, 2001: The FAA grounds all IFR and VFR air traffic. Only military aircraft and Air Force Once are allowed to fly. All airborne traffic is instructed to land.

Sept. 14, 2001: Working with the FAA and security agencies, AOPA is successful in getting approval for general aviation IFR operations, but there are significant restrictions, including 25-nautical-mile-radius no-fly zones around Washington, D.C., and New York, and no international GA operations. VFR operations are prohibited. No international operations are permitted to or from the United States.

Sept. 19, 2001: After significant pressure from AOPA, limited VFR operations are permitted. VFR is allowed for U.S.-registered aircraft outside of “enhanced” Class B airspace (airspace within the lateral limits of Class B airspace, which extends over 30 major U.S. metropolitan areas). VFR flight training and banner-towing operations remain prohibited. In addition, a number of temporary flight restrictions (TFRs) remain in effect, including 25-nm-radius no-fly zones over Washington, D.C., and New York. International operations remain prohibited.

Sept. 20, 2001: A “sporting event” TFR is issued, prohibiting flight below 3,000 feet agl within a 3-nm radius of “any major professional, collegiate, or high school sporting event or any other major open air assembly of people.”

Oct. 30, 2001: At the insistence of National Security Council, the FAA issues a notam banning all GA operations within a 10-nm radius of 86 nuclear power plants and sites throughout the country. The notam effectively closes almost 100 public-use airports and there is much confusion created by the “nuclear” notam. The Nuclear Regulatory Commission’s database contains errors: Several facilities are excluded from the database and others have incorrect location information. Compounding the problem, the agency will not release precise latitude/longitude data, so pilots are unable to accurately plot the prohibited airspace.

Nov. 6, 2001: Nuclear TFR expires and operations resume at 100 airports closed by the restrictions. There is a threat to reinstate the restrictions, but AOPA successfully lobbies against it.

Nov. 8, 2001: International operations remain prohibited, but AOPA secures a waiver process to allow Bahamas operations. U.S.-, Canadian-, and Bahamian-registered aircraft may now operate to and from the Bahamas under visual flight rules procedures. Operations to and from Canada and Mexico are also permitted.

Nov. 26, 2001: Building on the success of the Bahamas waiver, the FAA issues a “blanket” waiver to allow VFR operations at four New York-area airports. VFR with some restrictions is now allowed at New York's Republic and New Jersey's Morristown, Caldwell, and Lincoln Park airports.

Feb. 14, 2002: The FAA issues a special federal aviation regulation that partially reopens the “DC3” airports (College Park, Potomac, and Hyde Field) in the Washington, D.C., area. Only based aircraft may operate at those airports, and pilots must complete security background checks and comply with special air traffic procedures. The FAA states that after a “procedural” evaluation period, transient operations will be considered.

June 25, 2002: The FAA issues a series of security TFRs over national landmarks including the Statue of Liberty, Mount Rushmore, and the Gateway Arch. Most remain in effect through July 4, 2002.

Sept. 27, 2002: The FAA revises the “sporting event” TFR governing flight restrictions near large open-air events. The new notam is much easier to interpret and limits the restriction to MLB, NFL, and NCAA Division 1A stadiums, and major speedways seating more than 30,000 people.

Feb. 10, 2003: The FAA establishes a large air defense identification zone (ADIZ) around Washington, D.C. The ADIZ covers an approximately 30-nm radius of airspace and requires that all aircraft operate on a flight plan, squawk a discrete transponder code, and establish two-way communication with air traffic control. There is also a no-fly zone established in the airspace within a 15-nm radius of Washington, D.C.

Feb. 26, 2003: The FAA issues a notam warning pilots not to “loiter or circle” in the vicinity of nuclear power plants. The Transportation Security Administration threatens to interrogate pilots flying near the areas in a suspicious manner and place their names into an incident database.

March 18, 2003: The FAA imposes a 30-nm ADIZ flight restriction for New York City with requirements for pilots to operate on a flight plan, fly with a discrete transponder code, and in two-way communication with air traffic control. At the direction of Congress, the FAA issues TFRs over Disney theme parks in Florida and California.

April 17, 2003: The FAA publishes a cancellation notam rescinding the New York City ADIZ and the downtown Chicago TFR following a statement from the TSA of reduced threat levels.