The Los Angeles Times has joined the chorus of voices urging the city of Santa Monica to keep its airport open and operating on reasonable terms even as legal maneuvering over the future of the field continues. 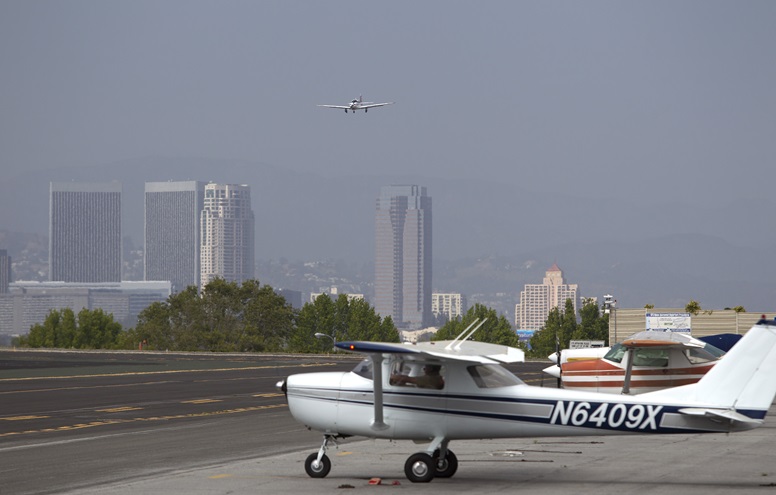 Two weeks after the FAA reiterated its longstanding and unambiguous view that Santa Monica Municipal Airport must continue operating on "fair and reasonable terms" until 2023 at least, the city issued eviction notices targeting both of the airport's fixed base operators, Atlantic Aviation and American Flyers. Photo by Chris Rose.

In a Sept. 23 editorial, the Times Editorial Board wrote, “This isn’t a frivolous playground for the ‘1 percenters,’ as some of its opponents like to cast it. It’s a vital hub in an already crowded air transportation system.”

Closing the airport would drive traffic to other already congested fields, including Los Angeles International Airport, the editorial noted, adding that in addition to serving as a reliever the field also provides important medical and charitable transportation and could be a critical means of delivering aid in the event of a major natural disaster.

In August, the FAA reiterated its long-held position that the airport must remain open and operating on “reasonable terms” at least until 2023 when federal grant obligations expire. The city accepted $240,600 in federal money in 2003 for airport improvements and, in accepting the funding, agreed to keep the airport running for the next 20 years.

But since the FAA’s August ruling, the city has moved to stop the sale of avgas and evict aviation tenants. When news of the evictions became public on Sept. 15, AOPA contacted FAA compliance officials, informing them of the situation and urging them to take action. AOPA and others have consistently argued that efforts to strangle the airport violate the city’s obligations. And the Los Angeles Times seems to agree.

“While Santa Monica’s claims to control of the airport are in court, the city should honor what the FAA says is its legal obligation to run it well—not into the ground in an obvious ploy to discourage people from using it,” the Times editorial stated.

Santa Monica Municipal Airport supports 1,500 jobs and contributes $250 million to the local economy. The airfield, once home to Douglas Aircraft, is located on 227 acres in the heart of the city and just 8 miles from Los Angeles International Airport.

AOPA and others have been fighting city attempts to close the airport for decades, weighing in on complaints filed with the FAA and taking part in numerous legal actions.