Get the app Get the app
Already a member? Please login below for an enhanced experience. Not a member? Join today
News & Videos Enrollment up at many aviation colleges

Enrollment at aviation colleges and universities is on the rise, and the trend signals the beginning of a long-awaited boost in the number of young people pursuing aviation careers, according to educators at major aviation institutions and industry professionals. They noted that lucrative careers in medicine, law, or business had previously drained potential pilots, mechanics, and others from their roll books before recent improvements in financial compensation and job guarantees made aviation more attractive to young people. 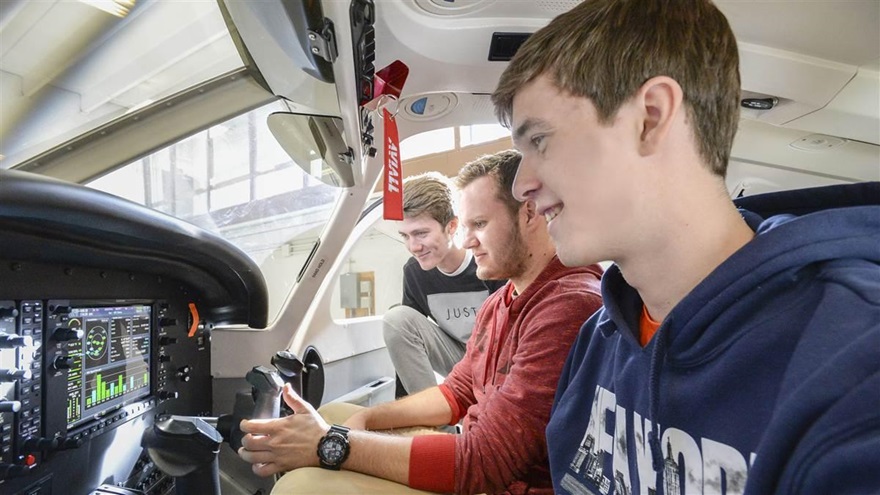 In the past two years starting salaries for commercial pilots at regional carriers have doubled—from $30,000 to $60,000—noted Ken Byrnes, the flight department chair for Embry-Riddle Aeronautical University’s Daytona Beach campus. He explained that the starting salary is now competitive with other fields drawing the attention of young people considering their career options.

“Years ago, it used to be you would get your degree and pilot’s license and maybe you would get a job as a flight instructor,” Byrnes wrote in a news release announcing the school’s largest incoming freshman class since 2001. “And then, maybe you’d get a job as a regional airline pilot and maybe eventually you would go to a major airline.” He added that the national demand for more commercial airline pilots, a pay increase, and a quicker return on investment were “contributing factors” to the enrollment increase.

The measures make aviation more attractive, and the trickle-down effect is noticeable in freshmen classrooms around the country, which swelled in 2017 as word of the hiring strategies circulated. Industry leaders say pilots are now able to justify how their earning potential could offset the cost of an aviation education.

Envoy Air Senior Vice President for Air Operations Dee Temples told a November gathering of aviation educators that there was “no better time to become a pilot.” The largest regional carrier for American Airlines provides pilots with a pathway to a major airline job. Other regional air carriers and some aviation schools are linked to similar pilot pathways at major air carriers including Alaska Airlines, Delta Air Lines, Southwest Airlines, United Airlines, and more.

Airspace manufacturer Boeing predicted that aviation would remain “hot” for at least the next 20 years, citing an increased public appetite for travel, emerging economies, and advances in technology. The aerospace giant called for 637,000 pilots, 648,000 technicians, and 839,000 cabin crew members worldwide.

The college enrollment increase has already led to economic growth and additional aviation jobs. For example, Embry-Riddle recently purchased four Cessna 172s to augment its fleet of 60 aircraft dispatched on approximately 300 flights a day. Byrnes noted the school also hired “about 20” additional certificated flight instructors for the 2017 fall semester with “another 30 to 40” expected in the coming months for a total of “more than 200 on staff.”

Ohio State University, which hosted the 2017 National Intercollegiate Flying Association’s SafeCon precision flying competition, has seen an uptick in enrollment for several years. “We experienced significantly increased enrollments beginning in 2013, going from less than 100 students in our academic aviation majors to more than 260 this academic year,” said Seth Young, director of the Columbus-based aviation program. “We’re in capacity management mode at this time,” he noted. Young added that the enrollment uptick led to increases in “service capacity” through additional instructors, aircraft, and building infrastructure. To that effect, fractional jet company NetJets donated seven Cessna 172 aircraft to the school to accommodate the expected increase in flight training missions.

Liberty University Aeronautics Dean Jim Molloy told AOPA that the aviation program had about an 8-percent increase over 2016 in new students majoring in aeronautics at the Lynchburg, Virginia-based facility. He’s learned of professionals in other industries that “switched careers to follow their lifelong dream to become a pilot.” Molloy added that “the word is getting out that there is a pilot shortage and jobs are available.”

He pointed out that the university has a robust online aviation program too. Flight students can attend one of 55 Flight Training Affiliates (FTA) across the continental United States and Hawaii. The online distance-learning program affiliation posted a whopping 50-percent growth since 2015.

“Students study and learn in the online medium with our faculty, and for the flight courses, they accomplish the required Part 141 flight training” at an FTA, Molloy explained. The program is especially appealing to participants who have roots in a community but want to make a career switch to aviation. It “enables those interested in a professional pilot career to obtain a degree and their ratings without moving their family or leaving their job.”

Molloy said that the improving economy “may have a play in this also. More people are flying than ever before, so more are exposed to flying.” He noted that airshow attendance seems to be "way up" and the aviation industry “is ‘in’ again.”

Western Michigan University’s College of Aviation spokesperson Tom Thinnes noted “a busy fall ... and it's only just beginning.” He told AOPA that the Battle Creek-based university welcomed “one of its largest freshmen classes ever,” and incoming students learned about positions with Envoy, ExpressJet, Endeavor Air, Republic Airways, SkyWest Airlines, and the Kalamazoo/Battle Creek International Airport.

In addition to flying and maintenance jobs, students can pursue an expanding variety of aviation-related careers including flight dispatch, airport management, retailing, information technology, meteorology, education, and other opportunities.

University of North Dakota aviation program director Ken Polovitz told AOPA the institution “absolutely” fielded a significant increase in 2017’s incoming class. “We are up substantially, in the neighborhood of 15 to 20 percent over last year’s incoming class.”

The bulk of those students are interested in professional flight majors and airline opportunities. “The big light at the end of the tunnel for most students is that they can see the majors are hiring. They think, ‘If I work hard and take the steps and do what’s necessary, then I will make it to a major airline someday.’ Before, it was pretty much dark and very uncertain” for them. “I’ve been doing this a long, long time and following our enrollment trends, our recruiting, and so forth,” Polovitz noted. “I’ve seen all the ups and downs—and this is directly related to the opportunities in the industry.”

An example of new aviation opportunities for students recently surfaced when the Grand Forks-based university inked a deal with U.S. Customs and Border Protection. The Nov. 28 agreement called for a pathway program that virtually guaranteed sophomores and juniors a full-time career with the Air and Marine Operations division, as long as they maintained good grades and adhered to rigorous training standards. Polovitz explained that the agency wanted to ensure itself of future staffing amid the high demand for aviation professionals elsewhere. “Everybody is looking for pilots and they are too.” The border agency counts 700 pilots flying a variety of aircraft that include the P-3 Orion fixed-wing, the UH-60 helicopter, and the MQ-9 Predator drone.

Polovitz said he’s seen “the absolute leanest of times and this is a lot more fun. If a student puts his mind to it, they can almost pick where they want to go these days. There’s not a better time to get into aviation and that’s why students are taking a hard look at it.”