Get the app Get the app
AOPA will be closed July 4th, in observance of the Independence Day holiday. We will reopen at 8:30 am ET on Tuesday, July 5.
News & Media Drone far beyond sight during Black Hawk collision

The owner of the DJI Phantom 4 that collided Sept. 21 with a U.S. Army UH–60M Black Hawk helicopter that was on security patrol over New York Harbor told federal investigators he had lost sight of his quadcopter minutes before the collision, had attempted to activate the automatic return-to-home function without success, and was surprised to learn it had collided with the helicopter more than two miles away. 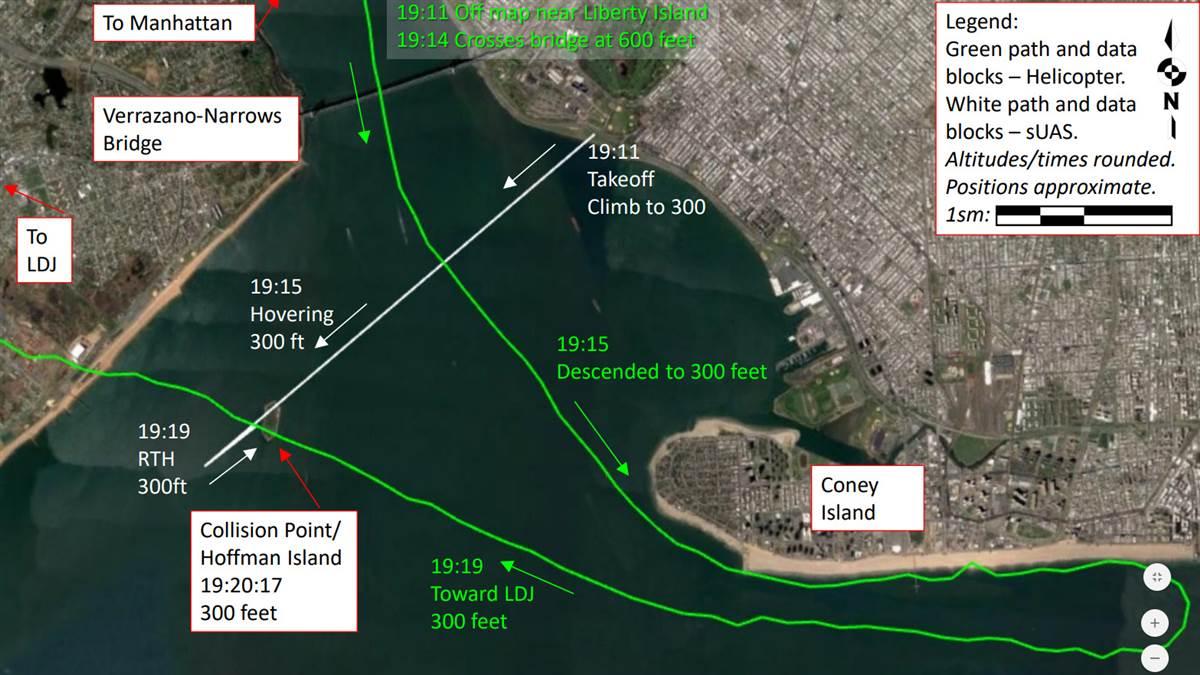 Vyacheslav Tantashov, identified as the drone pilot in a document published by the NTSB Dec. 13, also told investigators he was not aware of the temporary flight restriction that was in effect, and equally unaware of regulations that prohibit flying a drone beyond line of sight, a prohibition that applies to hobbyists and commercial drone pilots alike.

Data compiled and published by investigators offer deep insight into an accident that captured widespread media attention in the days following the first known midair collision involving a manned and unmanned aircraft. The NTSB confirmed in October that investigators had interviewed the pilot, but did not at the time detail what he told them, or how they found him.

No injuries resulted from the midair, though the helicopter made an emergency landing and required repairs including rotor blade replacement. The DJI Phantom 4, a small, unmanned aircraft system (sUAS) in the parlance of federal investigators, was destroyed.

The NTSB published photos, the interview report, and GPS data from the Phantom 4 provided by the drone pilot. The online public docket also includes radar data, and GPS data collected from the Black Hawk. The NTSB published a final report Dec. 14, and investigators determined that the probable cause of the accident was “the failure of the sUAS pilot to see and avoid the helicopter due to his intentional flight beyond visual line of sight. Contributing to the incident was the sUAS pilot’s incomplete knowledge of the regulations and safe operating practices.” 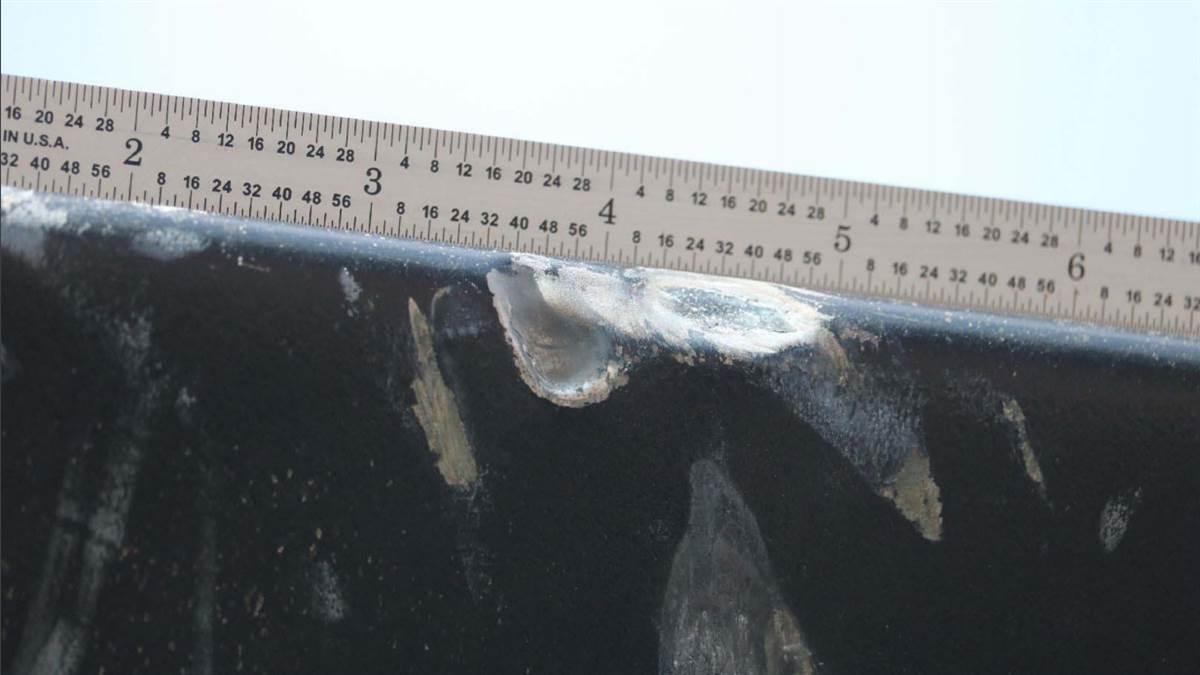 The DJI Phantom 4 launched from a Brooklyn park at 7:11 p.m., and was struck and largely destroyed by the Black Hawk’s main rotor less than 9 minutes later, about 2.5 miles away from where the Phantom had launched. The quadcopter was apparently flying an automated return-to-home program (a safety feature found in all DJI drones), having crossed roughly 2.5 miles of open water to reach Hoffman Island. The sun had set at 6:54 p.m.

According to the drone pilot interview report published along with data logs on Dec. 13, NTSB lead investigator Bill English located Tantashov after examining a piece of one of the Phantom 4’s motor arms that the Army crew had found inside the helicopter. Manufacturer data marked on the fragment was traced to the owner’s DJI account, and English called Tantashov to confirm he had lost his Phantom 4, and to arrange an interview the following day in which he would explain exactly what happened to it.

Tantashov, whose first language is Russian, was assisted by a representative who helped translate and ensure he understood what was said. The drone pilot was interviewed at his place of work Sept. 28 by English, Ed Kostakis of DJI, and Dennis Brown of the FAA Teterboro Flight Standards District Office, according to the interview report.

Tantashov told his interviewers that he had been flying drones for about two years, strictly for fun and recreation, and has no other aeronautical experience. He said his plan for Sept. 21 was to fly “over the ocean,” and he had flown in the area “hundreds of times,” often relying on the map to locate his aircraft once it was far out of sight, and too far for the aircraft’s camera view to reach his tablet. The Brooklyn, New York, park where he began the flight is about 7 miles west of the center of John F. Kennedy International Airport, and Class B airspace begins at 1,500 feet in that location. There were, however, temporary flight restrictions (TFRs) in effect at the time, related to travel by President Donald Trump and the United Nations General Assembly, the protection of which was the mission of the Black Hawk crew, call sign Caveman 87.

Tantashov gave the investigators access to the tablet he used with the Phantom, from which they recovered his DJI flight data from the accident flight, along with previous flights in which he flew beyond line of sight. Radar data, along with flight data from the helicopter, facilitated reconstruction of the flight paths of both aircraft in the minutes leading up to the collision. According to that data, Caveman 87 flew southbound over the Verrazano-Narrows Bridge at 600 feet at 7:14 p.m., three minutes after Tantashov launched his Phantom 4, which he had commanded to climb to 300 feet and fly southwest over the water toward Hoffman Island, which is about 2.5 miles from the drone’s recorded launch (home) point.

The drone pilot told investigators he had been flying for about 5 minutes when he lost contact with the drone. Five minutes after launch, the Phantom 4 had reached Hoffman Island. 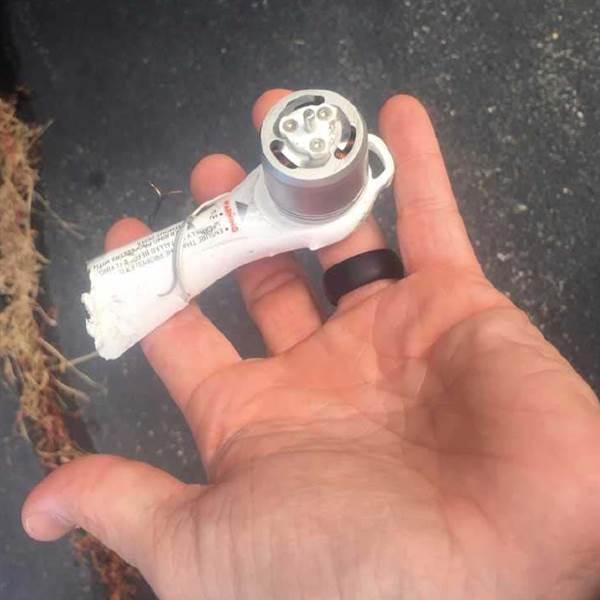 “He did not attach any significance to flying beyond line of sight, he would just reference the map on his tablet,” the NTSB interview report states. “He waited about 30 minutes for it to come home,” the report continued. “It never did, he figured it failed and crashed into the water.”

Tantashov told the investigation team that he had heard of the FAA B4UFLY app, one of several airspace awareness tools available at no cost to drone pilots, though he had never used it, or any other apps beyond the DJI GO 4 app used to operate the Phantom 4. He told investigators that he knew to stay away from airports, and that there was Class B airspace nearby, and that he relied on the DJI app (his tablet had only Wi-Fi capability, not cellular, so it had no access to current data) for airspace avoidance. He said he had received no warning from the app about the TFR before launching, and was not aware of the TFRs that were in effect at that time that included the entire Class B airspace, down to the surface within its lateral boundaries.

Tantashov told investigators he was below 400 feet, and assumed “everything should be OK,” and was surprised that a helicopter could be flying at 300 feet.

The Black Hawk had descended to that altitude approaching Coney Island from the north, and maintained 300 feet while flying just offshore along the popular amusement park and beach before turning west toward Hoffman Island and Linden Airport in New Jersey, where it would land after the collision near Hoffman Island with damage to the main rotor, window frame, and transmission deck, according to the interview report.

It remains unclear what enforcement action the FAA may take, in light of apparent violation of several rules and regulations, along with the drone pilot’s cooperation with investigators.

The Special Rule for Model Aircraft governs hobby and recreational use of unmanned aircraft, and defines “model aircraft” in part as an aircraft flown “within the visual line of sight of the person operating the aircraft.” The FAA also requires that an aircraft flown under this rule “does not interfere with and gives way to any manned aircraft.” Model aircraft flown by hobbyists are not exempt from TFR compliance, and are required to operate “in accordance with a community-based set of safety guidelines and within the programming of a nationwide community-based organization,” the FAA states in online guidance for operators. No such organization is known to endorse flying at night (the NTSB noted that the collision occurred two minutes before the end of Civil Twilight). While hobbyists are to a degree exempt from some of the limits of Part 107, which governs commercial drone operations, the FAA has broad authority to determine whether the actions of a pilot were “careless and reckless.” 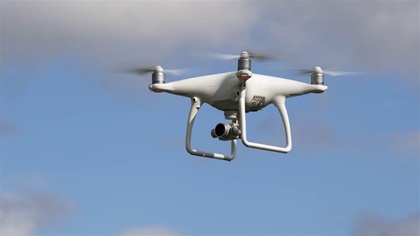 Pilots flying drones under Part 107 have preflight responsibilities that are similar to what is required of manned aircraft pilots, including the requirement to be familiar with airspace and flight restrictions. However, the FAA has not imposed such a requirement on hobbyists, in part because of limits on the agency’s ability to regulate model aircraft that were included in the 2012 FAA Modernization and Reform Act.

In a data analysis published with the final report Dec. 14, the NTSB noted that the sUAS pilot had relied on unreliable tools for airspace awareness:

“Although the TFR airspace awareness functionality in the DJI app (GEO) was not active at the time of the incident, this feature is intended for advisory use only, and sUAS pilots are responsible at all times to comply with FAA airspace restrictions,” the final report states. “Sole reliance on advisory functions of a non-certified app is not sufficient to ensure that correct airspace information is obtained. Had the functionality been active, the sUAS pilot would still have needed to connect his tablet to the internet before the flight in order to receive the TFR information. Since the sUAS pilot's tablet did not have cellular connection capability, it is unlikely that he would have been able to obtain TFR information at the time of the flight. Because the pilot solely relied on the app to provide airspace restriction information; he was unaware of other, more reliable methods to maintain awareness.”

The NTSB also noted that the Phantom 4 did not malfunction:

“The sUAS operated as expected at all times. Although the recorded data showed a 9-second gap in telemetry, this was likely due to distance from the remote controller.” 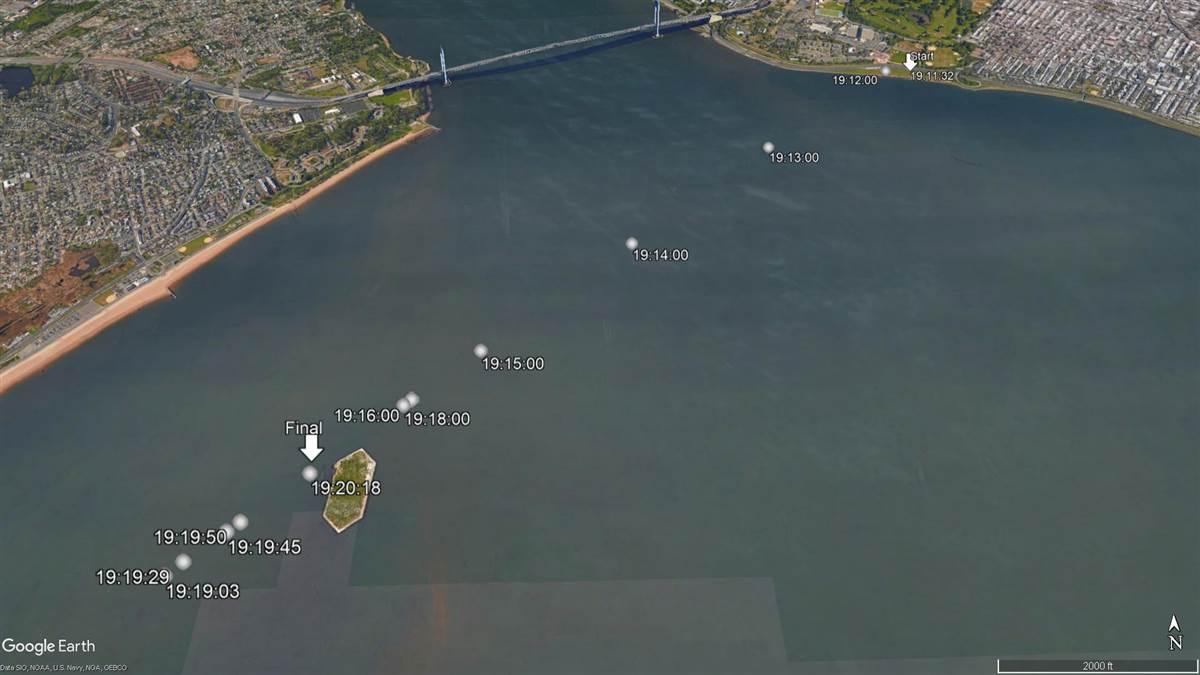