Levil Aviation has begun work to fill preorders following FAA approval of an external data module that gives any general aviation aircraft a self-powered, wireless source of backup data on position, attitude, and angle of attack, along with traffic and weather information. The Broadcasting Outer Module, or BOM, looks a bit like a bomb, but it’s designed to stay attached under the wing, and offer a fully independent source of critical data with no wires required. 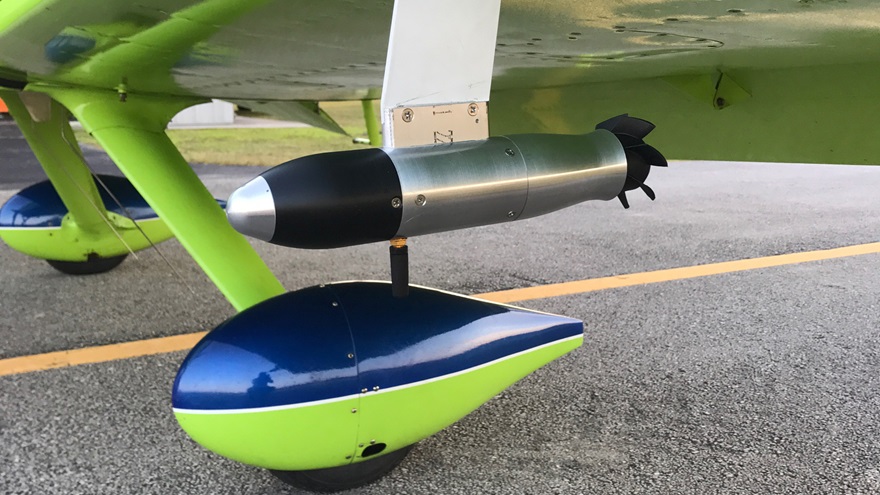 Levil Aviation's BOM (broadcasting outer module) is installed here on a Van's RV-9. The unit is 10 inches long, 2 inches wide, and weighs just under one pound. The mount puts it 4 inches from the bottom of the wing. Photo courtesy of Levil Aviation.

The Florida-based company that offers a range of devices and aircraft retrofits capable of collecting and recording GPS, attitude heading and reference system (AHRS), angle of attack, and Automatic Dependent Surveillance-Broadcast data has combined these functions (including ADS-B In) into a self-powered, fully automated module that mounts under the wing near the leading edge, and feeds data to a mobile device in the cockpit via Wi-Fi.

The BOM retails online for $1,295 without an ADS-B receiver, and $1,595 with ADS-B In capability. The instrument pod is 10 inches long and weighs just under a pound. It is powered by the aircraft slipstream, which turns on an integrated wind turbine on the tail of the device, in much the same way that auxiliary power units used on transport aircraft provide emergency backup power.

The company reported in a press release that it will begin filling preorders by the end of December, and commence general sales at the Sun 'n Fun International Fly-In and Expo in April 2018.

“We are super excited about this product, we have worked very hard to make this as innovative and forward thinking as possible,” said Levil Aviation General Manager Ananda Leon, in the news release. “I can’t wait to see what this product does to the world of aviation.”

The BOM turns on and off automatically, triggered by the presence or absence of engine vibration, and provides fully independent measurements of position, attitude, and angle of attack, with a heated pitot static source built in. It also records the data, and allows real-time access during flight using a mobile device.

Levil’s BOM was approved by the FAA for installation on certified aircraft under the Non-Required Safety Enhancing Equipment (NORSEE) policy enacted in 2016, with strong support from AOPA, and joins a growing list of devices and equipment credited with contributing to the increased safety of general aviation noted by the NTSB, and others.