A Pennsylvania field is a “beautiful, yet ugly” reminder of how 40 ordinary citizens stood up to terrorist hijackers who tried to turn an aircraft into a device of mass destruction. The Flight 93 National Memorial near general aviation’s Somerset County Airport honors the passengers and crew for sacrificing their lives to prevent further human casualties on Sept. 11, 2001.

They are considered heroes for their courage confronting terrorist hijackers aboard a transcontinental United Airlines flight that originated in Newark, New Jersey, and was bound for San Francisco.

Capt. Jason M. Dahl and First Officer LeRoy Homer were overpowered and forced to reverse course toward the U.S. Capitol. Passengers, including Todd Beamer and his “Let’s roll” battle cry, can be heard resisting the attack.

“It was a beautiful sunny day,” recalled Somerset, Pennsylvania, automobile mechanic Wade Boncoski. “Then I saw this big cloud of smoke like I’d never seen before.” In the moments before it crashed, witnesses reported the aircraft flying erratically and rolling left and right. It is believed that hijackers were confronted by passengers and crew attempting to retake the cockpit. One theory published on the memorial’s web page suggested the hijacker-pilots were trying to throw the passengers off balance.

“We knew what was happening elsewhere because of the news [about the New York attacks],” Boncoski explained. “I was devastated, but thank God it went down where it did. The Shanksville high school is not even a mile away and the airplane went right over the top of it,” as the pilots, crew, and passengers tussled with the intruders. “I consider them heroes for what they did.” 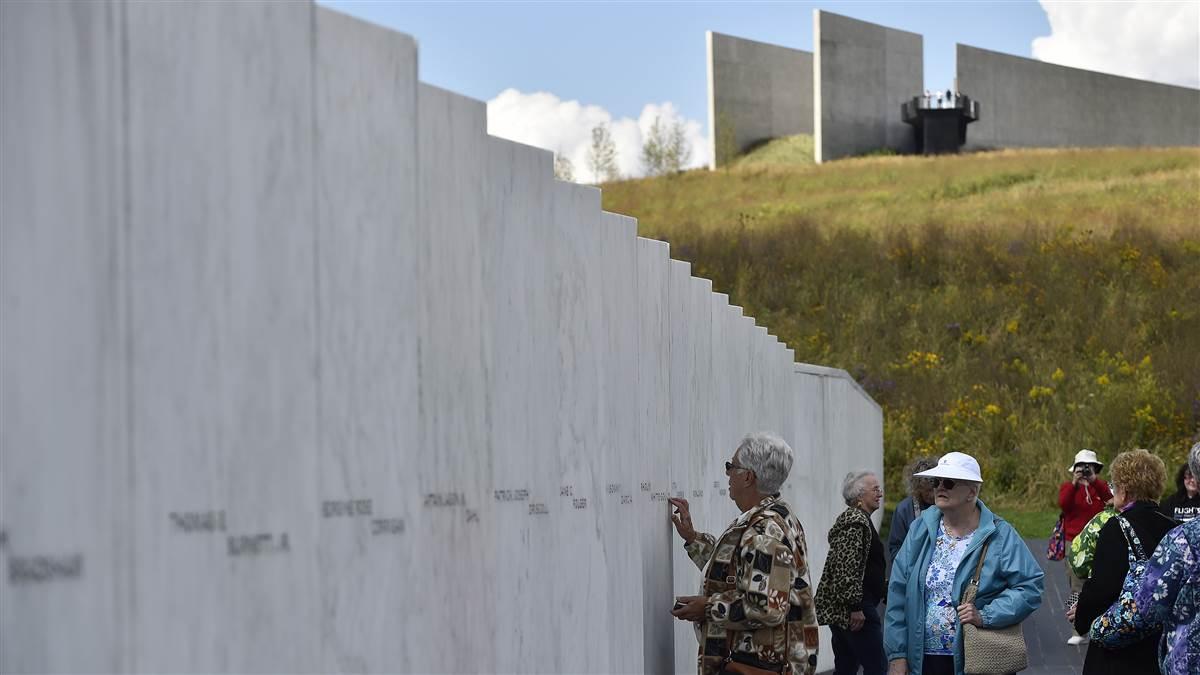 “My hat’s off to these people,” said Denis Meany, of Gettysburg, who visited the Flight 93 National Memorial Sept. 8. “They did a brave thing. They knew they were going to die and they made sure nobody else got in harm’s way.”

Visitors to the memorial were visibly affected by the heroics of the passengers and crew. Three audio conversations were left for loved ones by those aboard the aircraft, and listeners fought back tears after hearing the recorded messages. 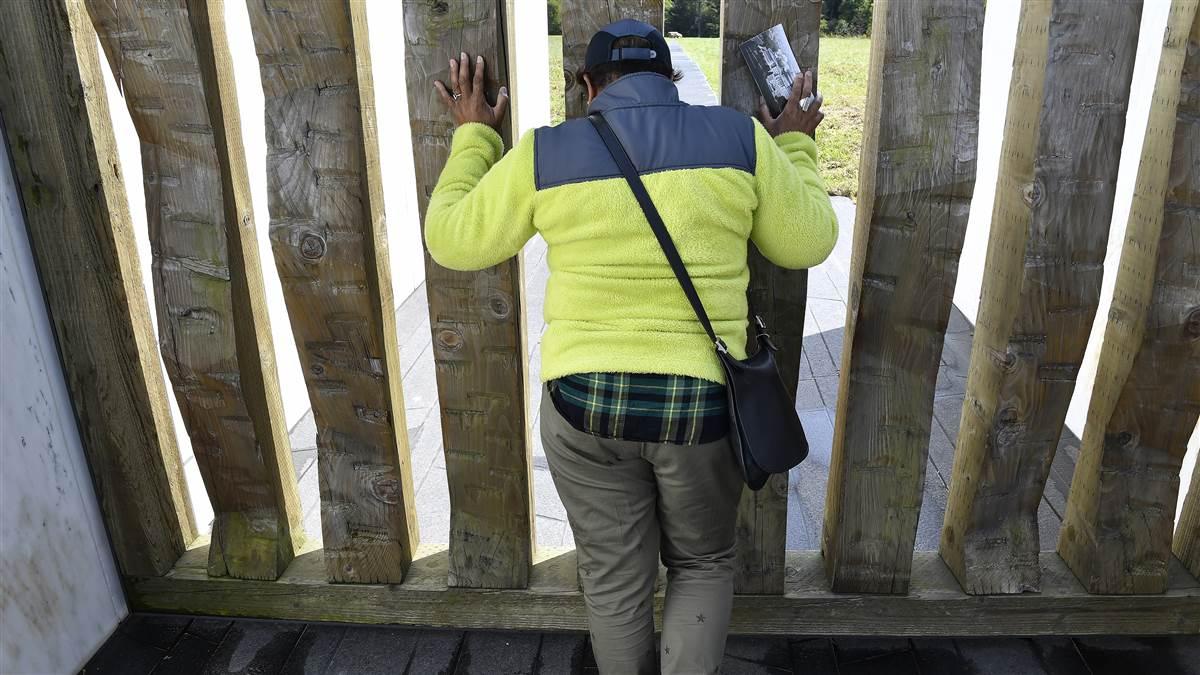 “It’s beautiful and yet so ugly at the same time,” said Harold Ulmer, who hugged his wife Janice and wept after listening to the audio tapes. “It was very moving. It’s such a beautiful place and then you realize such tragedy happened here—can you image what those people were going through?”

The memorial’s angular aerial walkway entrance marks the aircraft’s flight path before the pavement abruptly ends dozens of yards above a former surface coal field. It was reclaimed and now yellow sunflowers gaze at the sky near stands of seedling trees planted in groups of 40—one for each person aboard the aircraft.

The aircraft’s debris field spreads out below the promontory, and a clear glass railing overlooks the crash site. A white marble Wall of Names is at the bottom of the field near a large boulder that marks the aircraft’s final resting place. While most of the memorial is open to the public, only family are permitted beyond a gated area into the exact spot of impact.

The aircraft hit the ground with such violence—at more than 560 mph and at nearly a 40-degree angle—that it buried itself in the soft earth before imploding, leaving shards of debris and “largely unrecognizable pieces of twisted metal,” the memorial’s web page noted. 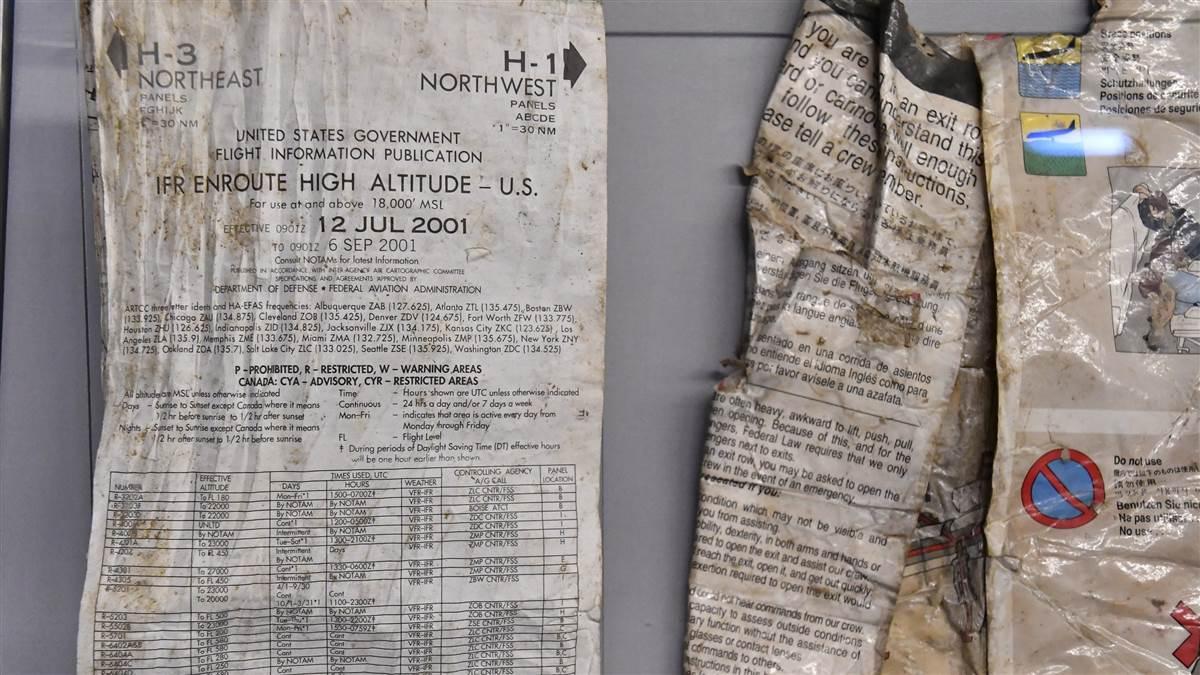 Although most of the wreckage recovered was quite small, the intact and mud-stained IFR high altitude chart used by Dahl and Homer is on display, along with seat back information cards, part of the aircraft’s 5491 nose number, and hundreds of mementos left behind by family and visitors.

“It’s overwhelming,” said Bernadette Schaad, who dabbed at her eyes while viewing the field from the aerial walkway. “The courage of all those people … I don’t know if I could’ve done that. It's extraordinary what they did, and they were just everyday people.”

A number of U.S. presidents have participated in the annual Sept. 11 Flight 93 remembrance ceremonies, including George W. Bush, who was in office during the attacks. “What happened above this Pennsylvania field ranks among the most courageous acts in U.S. history,” he tells video viewers. “The United States will never forget.”

Phase One of the memorial, which included the “Sacred Ground” portion that surrounds the entire site, was completed in 2011 for the tenth anniversary of the terrorist attacks. Phase Two included the interpretive exhibits, aerial walkway, and other architectural features and was completed in 2015. Phase Three construction began Sept. 10, and includes 40 wind chimes that will sing out in the nearly constant mountain winds.

Somerset County Airport is about 10 miles away, and airport manager Dave Wright said a crew car is usually available for pilots, although the weather can be a bit iffy at times. During a recent visit the forecast called for clear skies and mild temperatures but was instead windy and wet. “That’s Somerset County for you,” Wright confided. The airport’s 5,002-foot-long runway can easily handle typical GA flight operations, but the field’s 2,275-foot elevation and shifting winds often rushing through the valley should be thoroughly considered.

Cessna 182 pilot Joe D’Andrea flew to Somerset County Airport with family and friends to visit the Flight 93 National Memorial. “I was a corporate pilot and I’ll remember that day forever. When you see the exhibits, the flight path, and the wall of pictures, it just impacts you,” he said. “It was a well-worthwhile visit.”