Get the app Get the app
Get the latest news on coronavirus impacts on general aviation, including what AOPA is doing to protect GA, event cancellations, advice for pilots to protect themselves, and more. Read More
Already a member? Please login below for an enhanced experience. Not a member? Join today
News & Videos 'The right thing to do'

Like other aviators, I wanted to do something—anything—to help as Hurricane Irma bore down on the United States as a monster Category Five storm. My opportunity to assist came together when AOPA organized a relief campaign to help Florida residents get back on their feet two days after the aviation-rich state was swept by wind speeds of 130 mph and a Category Four hurricane.

I’ve covered many hurricanes as a newspaper and wire service photojournalist. Hurricane Elena chased me around Florida’s western elbow. After Hurricanes Fran, Bonnie, and Floyd, I hopped in Cessna 172s to get aerial photos above North Carolina’s Outer Banks. I rode out Hurricane Hugo in a friend’s second-floor Charleston, South Carolina, apartment as winds flung metal shrapnel through the air like darts. I remember miles and miles of trees cracked in half like toothpicks after Hurricane Hugo deposited ships in residents’ yards as far north as Mount Pleasant, South Carolina.

But this was my first coverage assignment as an aviator. I came prepared for Hurricane Irma’s aftermath because I knew that gasoline would be scarce, power nonexistent, and food absent. My backpack had enough food to feed a family of five; I had solar chargers for everything; ForeFlight was locked and loaded. I packed a tent, sleeping bag, cook set, lots of camera gear, and a few pieces of clothing. Basically, I was well-prepared for wilderness—but the pack was so heavy it was nearly impossible to wrangle it into an aircraft.

My duties were to help reposition a Cessna 182 from AOPA’s Frederick, Maryland, headquarters to Florida’s Lakeland Linder Regional Airport where we could join an aerial supply caravan coordinated by AERObridge, the all-volunteer, nonprofit general aviation organization that acts as a clearing house after natural disasters at home and abroad. Four GA aircraft, two moving vans, and about 16 people were involved in the operation, which is scheduled to continue for days. 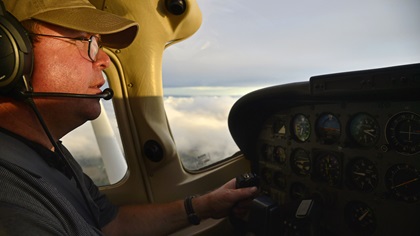 Carlo Cilliers, an ace mechanic who is thoroughly familiar with the care and feeding of a Skylane, was pilot in command. I handled the radio frequencies and flight plan and spelled him for relief every now and then.

We had a tall order: Fly about 900 miles as quickly and as safely as possible to join fellow AOPA pilots Luz Beattie and Janet Davidson, AOPA Air Safety Institute Executive Director Richard McSpadden, and AOPA Senior Vice President of Media, Communications, and Outreach Tom Haines at Lakeland—before deploying to the front lines in Homestead, and ultimately, the Florida Keys.

Our first day began shortly after sunrise with a pilot meeting to explain duties and compassion flight procedures, and to review temporary flight restrictions. Carlo and I took off after low clouds lifted at 11 a.m. and dodged Hurricane Irma’s lingering wrath that had fanned out over the Eastern Seaboard.

Facing 20-knot headwinds, we ended the day about 450 miles later as the sun painted Wilmington, North Carolina, orange. After a few hours of shuteye, we were back at it early the next morning with a route that would allow us to check out coastal damage along the way. 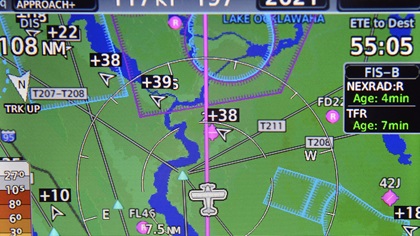 I’d heard from Georgia friends that St. Simons Island residences had flooded; and I wanted to survey downtown Jacksonville, Florida, where the St. John’s River lapped at Riverwalk shops and restaurants. VFR flight following from air traffic controllers helped us steer clear of active military operating areas; ATC staff could not have been more helpful. Controllers were especially pleasant during a photo flight around Jacksonville—and again in central Florida—as a long conga line of returning Embry-Riddle Aeronautical University pilots made a beeline east for their home base.

We arrived at Lakeland airport hot, tired, and thirsty at 1 p.m. after flying into a headwind for 450 miles, but our hearts lifted when we saw our friends taxiing out in aircraft loaded down with medicine, food, and bottled water.

AERObridge’s Michael Burwell had just arrived from Minnesota and quickly took the reins. Sun ‘n Fun’s Jeannie Schneider and her husband Scott marshalled aircraft, greeted volunteers, and tried to keep things as organized as possible in a chaotic environment. During the afternoon missions, the ramp was a flurry of activity as a half dozen college students from Southeastern University packed and unpacked critical supplies from airplanes, cargo vans, and 12-foot trailers. 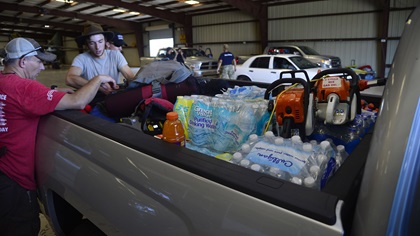 Inside one of the three large Sun ‘n Fun show hangars, retired personnel from the U.S. Army’s 75th Ranger Regiment loaded an armada of pickup trucks with chain saws, bottled water, food, and baby supplies next to a restored Mikoyan-Gurevich MiG-23 fighter jet. Schneider said 200 U.S. Air Force Reserve troops were due to arrive in Lockheed C-130s and were prepared to spend the night in the hangar, which normally houses vendors during the annual airshow.

After refilling the Cessna 182’s tanks and emptying the aircraft’s contents, and buoyed by receiving our first mission, Carlo and I lifted off at 4 p.m. behind Haines and McSpadden, bound for Ocala International Airport, 100 miles away. The assignment was to load the aircraft with medicine, beans and rice, baby supplies, and other necessities and bring them back to Lakeland before sunset. Meadowbrook Church’s Jamil Bess quickly tossed boxes of food to fellow volunteers who then carried them to the awaiting aircraft outside Ocala fixed-base operator Sheltair. “We’re doing this out of love and compassion for everybody,” said Bess, 16.

The loaded-down late-model Cessna 182 began to look more like a taildragger on the ramp, but its big Lycoming engine easily handled the takeoff, and we set a course due south for Lakeland, again.

By this time, the sun was low on the horizon and so was our energy level, but we were ecstatic to assist the enormous relief mission that is bound to take weeks, or longer. The feeling of accomplishment can’t be measured by words, deeds, or money. AOPA Senior Safety Advisor Bruce Landsberg summed it up best: When asked why he volunteered his Bonanza, his time, and his resources to help people he didn’t even know, Landsberg replied, “Because it was the right thing to do.” 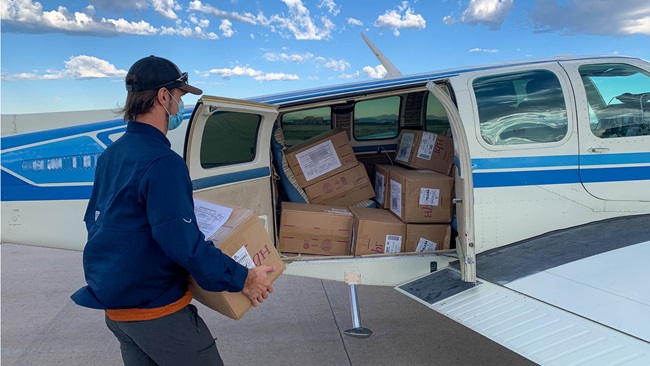 Over the Divide to flatten the curve