Get the app Get the app
Get the latest news on coronavirus impacts on general aviation, including what AOPA is doing to protect GA, event cancellations, advice for pilots to protect themselves, and more. Read More
Already a member? Please login below for an enhanced experience. Not a member? Join today
News & Videos Popular Michigan airport K-9 Piper dies of cancer

Piper, the K-9 border collie that was well-known for his wildlife patrol antics, toothy smile, and oversized goggles, died Jan. 3. The nine-year-old canine at the Cherry Capital Airport in Traverse City, Michigan, had built more than 1 million “likes” in the three years since handler and owner Brian Edwards posted their first social media update. He was celebrated by fans from across the globe. 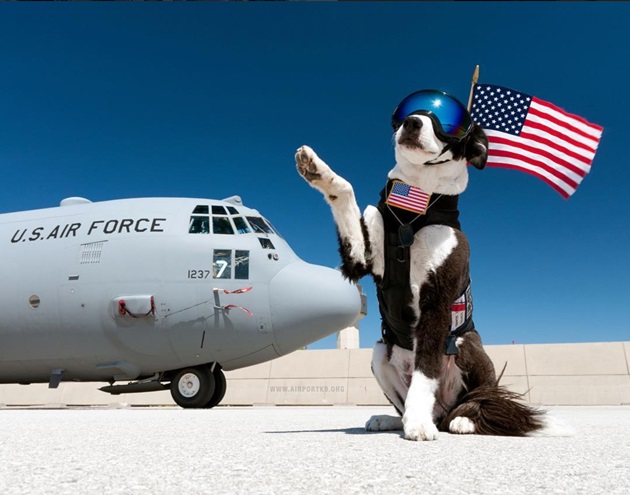 Edwards, an airport operations supervisor, reported with “ultimate sadness” that he lost his “best friend” and the love of his life. Airport personnel said the two were inseparable.

“He fought valiantly, and we did everything we could, but sometimes life just has to take its course,” Edwards wrote on Instagram. The service animal died peacefully in Edward’s arms after a yearlong battle with prostate cancer.

The airport hosts about 100,000 operations a year, with a mix of general aviation, commercial, public safety, flight training, and other operations. Piper played a key role in the airport’s daily procedures since he began his on-the-job training in 2015.

His famous black-and-white face and expressive brown eyes were the subject of numerous news reports, YouTube videos, and social media posts. Piper was featured in an AOPA article about popular aviation Instagrammers and in another article detailing how canine patrols could rid airports of flocking birds. The reports noted that Piper loved to work and took “a proactive approach” to wildlife management and aviation safety.

Edwards began training Piper from an SUV patrol vehicle, and the dog progressed until he was comfortably trotting along the airport’s perimeter, grassy areas near taxiways and runways, and wetlands that attracted waterfowl. One of his jobs was chasing away wildlife that could affect aircraft during landings or takeoffs. Snowy owls were a particular favorite because they flew low to the ground, making them appear to be easy prey, noted Edwards. The handler said some of the chases went on for “an hour and a half …. (with the) control tower making fun of us, just going in circles.” Eventually, the owls learned that Piper would not give up, and began choosing other places to roost. Besides stalking owls, typical duties included frightening away flocks of birds and guarding the airport from other four-legged intruders.

News of Piper’s death brought condolences from as far away as Norway. “My heart just broke into pieces. I'm so sorry for your loss,” wrote Cutepinex, posting from Scandinavia. “Piper was special in every way,” wrote Michigan’s Lorne_Ernst, who noted the K-9 was a “hero” to the airfield’s pilots and visitors.

Airport manager Kevin Klein told AOPA that he was deeply saddened by the loss of the K-9. “Piper was an outstanding asset and took on a personality of his own—from the goggles he wore to his special vest.” Klein described the duo as an “integral part” of the airport’s operation and noted that Piper excelled as an outreach representative. Klein said Piper was the grand marshal for the city's National Cherry Festival and the pair often visited schools for presentations. He said when people spotted Edwards and Piper outside of the airport environment they often stopped to take pictures. “Many looked at Piper as their own dog.”

U.S. Coast Guard Air Station Traverse City located at the airfield honored Piper’s dedication to aviation safety by presenting a U.S. flag to Edwards in the K-9’s memory. The gesture was an indication of the outpouring of love for Piper and his handler, said Klein. “They built such a close bond,” he added. “They did everything together,” both in their professional and personal lives.

“Piper was very special,” recalled Klein, who was contacted by scores of Traverse City residents who offered their support for Edwards. “They want to make sure that with the loss of Piper, that Brian is OK.”