Add Boeing to the list of aircraft makers eyeing a future in which passengers are whisked across the planet at amazing speed, but don’t hold your breath waiting on a Mach 5 ride. 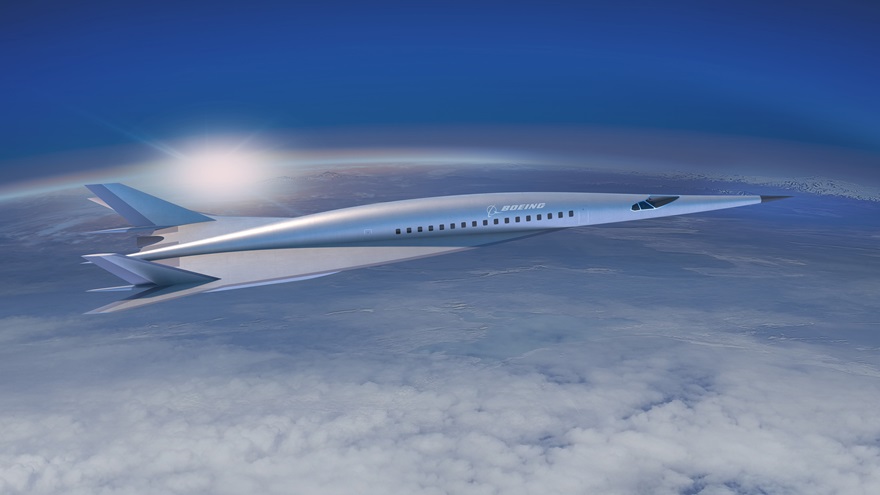 Boeing unveiled this hypersonic passenger aircraft concept in June, though an actual prototype is probably decades away. Image courtesy of Boeing.

Boeing attracted media attention with the unveiling of a hypersonic passenger jet concept at the American Institute of Aeronautics and Astronautics conference in Atlanta in late June. This preliminary design is one of several such concepts the aerospace giant is studying, Boeing spokesperson Brianna Jackson noted in an email. The sleek rendering of a delta wing, twin-tail jet with a long, pointed nose and a short row of passenger windows prompted eager speculation about how it might work, though this concept is still, even by Boeing’s reckoning, 20 to 30 years away.

Boeing made public its interest in a concept—propelling aircraft at speeds exceeding Mach 5, or 3,334 knots, cutting flight times between North America and Europe to about an hour—that has proved to be a bigger challenge in many respects than breaking the sound barrier when Chuck Yeager flew the Bell X-1 past the speed of sound in 1947.

The U.S. Air Force and Defense Advanced Research Projects Agency announced in 2013 a successful test of a missile-sized hypersonic vehicle, the X-51 WaveRider, logging 3.5 minutes at Mach 5.1. That success followed failure of the same air-launched system, which flew out of control before the engine was fired in a 2012 test. While the Pentagon has allocated more money for hypersonic research, in large part because of concern that Russia and China have taken a commanding lead in the development of hypersonic vehicles, it is unclear how close the secret U.S. efforts have come to overcoming the technical challenges.

Boeing sounded somewhat upbeat in a June announcement delivered during the AIAA conference: “We’re excited about the potential of hypersonic technology to connect the world faster than ever before,” said Kevin Bowcutt, senior technical fellow and chief scientist of hypersonics, in the company statement. “Boeing is building upon a foundation of six decades of work designing, developing and flying experimental hypersonic vehicles, which makes us the right company to lead the effort in bringing this technology to market in the future.”

Connecting distant city pairs across the planet in three hours or less is a tempting goal, with a mix of firms both established and brand-new vying to get various concepts for supersonic and hypersonic (Mach 5 and faster) aircraft off the ground, but the technical challenges including propulsion and high-speed aerodynamics remain formidable.

“In short, we’re a long way from knowing anything about the economics of a purely theoretical hypersonic plane,” Aboulafia wrote in an email responding to questions about Boeing’s public entry into the race for hypersonic speed. “I have my doubts, but I wouldn’t say it’s impossible. But either way, it’s decades away.”

Boeing’s Jackson said that the initial efforts would most likely not be directed at the commercial air travel market, in any case. “Hypersonic flight would be used initially for national security applications,” she wrote.