Get the app Get the app
Already a member? Please login below for an enhanced experience. Not a member? Join today
News & Media Detroit airport study was heavily edited

Case for airfield watered down

A study commissioned by the city of Detroit on the viability and long-term potential of Coleman A. Young Municipal Airport was released in January, minus about 20 pages of material that speaks to the airport’s upside. 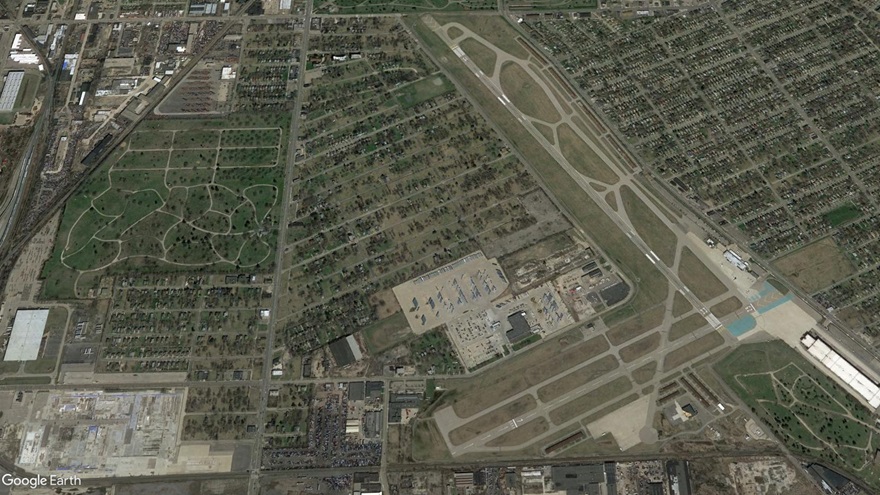 The city of Detroit is once again considering options for the future use of Coleman A. Young Municipal Airport. Google Earth image.

A Freedom of Information request by local pilots (and AOPA) yielded a December draft that includes more detail, including the conclusion that the airport could at least pay its own way with minor adjustments to management practices.

The final version of the first phase of a planned three-part study conducted by a team of hired consultants was released in January (mistakenly dated “2017”), minus much of the information included in a December draft. Pilots and other supporters of the airport, including AOPA, were surprised that much of the information removed appears very pertinent to the decisions that the city is preparing to make.

That first draft, dated Dec. 13, notes (on page 8, in the first paragraph under “Methodology”) that interviews and focus group conversations had been held with “over 80 people, collectively,” a number reduced to 60 in the version that became public in January.

Notably present in the initial draft but absent from the final were the names of several groups that participated, including AOPA, the National Business Aviation Association, Coleman A. Young International Airport Education Association, Tuskegee Airmen, and the “new Civil Air Patrol chapter at DET.” Feedback gathered from other business and civic groups including the Building Owners and Managers Association of Metro Detroit and Urban Land Institute, which helped connect the consultants with real estate professionals with at least 20 years of local experience, was also omitted.

The final report omits not only the names, but much of the information provided by those with knowledge of both local aviation and real estate, constituencies with perspectives on the future of the 264-acre airport property. When the final report was made public in January, The Detroit News reported on the findings contained in the slimmed-down, 39-page version. The final report says little about the airport’s value to the community, and emphasizes its cost to local taxpayers with little indication that federal grants could cover most of the cost of needed repairs and upgrades. The January report notes that tens of millions of dollars would be required for repairs and upgrades to make the airport suitable for scheduled passenger service, which has been absent for 15 years and is unlikely to return for reasons detailed in the original draft. An estimated $23 million would be required to bring the airport to a state of “good repair.”

City officials have said they are looking to maximize jobs.

“The question I have to ask is, is there a prospect with aviation functions to grow city airport from 200 employees up to into the thousands? That’s what we’re looking for,” Mayor Mike Duggan told The News in a January interview. “If the answer is yes, we want to pursue it for aviation purposes.”

Eric Dueweke, a lecturer in urban and regional planning at the University of Michigan, told the newspaper he believes there is universal support for job creation.

“I think the difference of opinion might be that people who are currently vested in the airport believe that potentially more jobs could be attracted by keeping it as an airport rather than decommissioning it for some other use,” Dueweke said.

The omissions from the final report were noted more recently by Crain’s Detroit Business, which also obtained copies of both versions, and asked city officials to explain why so much of the December draft was cut. The answer given was that the information deleted from the draft version “wasn’t within the scope” of the study’s first phase. Jed Howbert, executive director of the mayor’s Jobs and Economy Team, told Crain’s that the consultants had not followed the approach requested by the city.

"Phase No. 1 is basically gathering the facts," Howbert said. "When we got some of the work-in-progress drafts from the consultant, we basically said they skipped ahead. I think they just got ahead of themselves. They produced a document that wasn't consistent with what we wanted. Phases No. 2 and No. 3 are really going from the basic facts from Phase No. 1 and looking forward into the different scenarios."

Airport supporters told Crain’s they view the omissions as a sign the city is preparing to strangle the airport to death, particularly in the context of a city government that has been unwilling to offer multi-year leases to airport tenants. City officials told Crain's that they are waiting until all three phases of the study are complete before making any decisions on the long-term future of the airport, including leases.

AOPA Manager of Airport Policy Adam Williams has been working to help city officials and residents see the value of the airport. He told The Detroit News in 2017 that the city has “a huge opportunity” to attract business and jobs thanks to the airport’s proximity to downtown. Williams noted that other cities including Hartford, Connecticut, and Cleveland that studied the same issues and considered closing local airports ultimately concluded that the economic benefits—including jobs—extend far beyond the airport fence.

Similar sentiments were expressed by the real estate professionals who took part in focus groups in Detroit. However, their conclusions that the airport plays an important role in the city’s ongoing economic recovery, and its future, and describing the many obstacles that would stand in the way of redevelopment, including a surplus of available property that can serve a similar purpose elsewhere, were removed before the final Phase 1 report became public. Also absent was information about opportunities that the city has to reduce utility costs and allow the airport to pay its own way.

Williams said AOPA will continue to work with local airport supporters and city leaders, including members of the city council who have resisted efforts to undermine the airport’s future as such, and expressed a desire to keep the airport active, and expand its use and value to the community.

Discussion of airport redevelopment is nothing new in Detroit; AOPA has been educating new generations of public officials for some time.