Research by the MITRE Corp. into how mobile devices could be used to deliver IFR clearances to general aviation pilots in the cockpit has led to an initial test that currently is underway at Manassas Regional Airport in northern Virginia. MITRE is a not-for-profit organization that conducts research for the FAA and other government agencies. 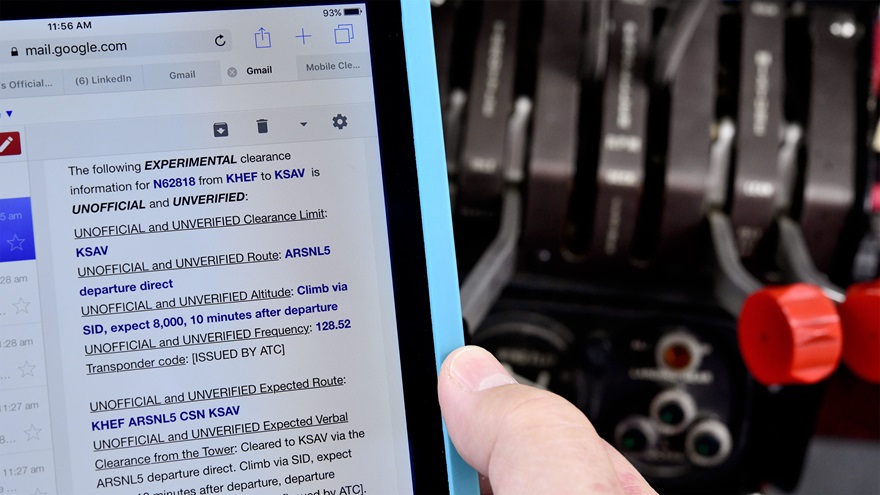 In MITRE's Expected Clearance research project, participating pilots will receive an email with the anticipated clearance; they're asked to report any differences between the emailed text and the clearance received. Only pilots flying IFR out of Manassas (Virginia) Regional Airport and submitting flight plans via Foreflight can participate in the test. Photo by Mike Collins.

MITRE has been investigating the concept since 2014. Last September, AOPA wrote to the FAA in support of MITRE’s prototype app. “We believe the FAA should embrace this technology, as it would make the thousands of general aviation IFR clearances given at towered and nontowered airports each day more efficient, reduce pilot and controller workload, and improve safety by reducing readback/hearback errors,” wrote Melissa Rudinger, AOPA vice president of government affairs.

The test began in mid-May and will end by July 29. Pilots who file IFR flight plans through ForeFlight when departing Manassas are eligible to participate in the test, which is designed to be transparent to air traffic control. MITRE has a research agreement with ForeFlight, which is partnering with MITRE in the test. If the technology becomes operational in the future, it will be available to any flight-planning service that chooses to license it.

Participating pilots will receive an email from ForeFlight with their anticipated clearance, explained Paul Diffenderfer, principal air traffic management advisor for MITRE. “Pilots will still have to call clearance delivery and request their clearance,” he said. “We’re asking pilots to give feedback—did [the clearance received] match the email, and if not, what didn’t match?”

The expected clearance email does not include the flight’s assigned transponder squawk code—although MITRE is determining that from FAA data systems, along with other clearance elements, Diffenderfer explained.

The future vision would be a fully integrated digital clearance that could be acknowledged from the mobile device, Diffenderfer said. “That is the larger challenge. The technology is doable. It’s the cultural acceptance, the operational acceptance of the idea, that’s been very challenging.”

Such a system could provide powerful new capabilities to pilot app developers, who are already connected to the FAA’s System Wide Information Management system (SWIM). “If you could deliver that clearance to an app that’s connected to the [aircraft’s GPS] navigator, you could push a button and load that clearance,” he explained. “It takes the human and the ‘fat fingers’ out of the loop.” That could give operators of light general aviation aircraft capabilities similar to what many airlines and other large aircraft enjoy through Controller-Pilot Data Link Communications—the ability to acknowledge and load a departure clearance with the press of a button, but without the expense and weight of the additional equipment that system requires.

Although Manassas lies within the Washington, D.C., Special Flight Rules Area and VFR aircraft departing Manassas must file an SFRA flight plan, the test does not include those VFR flight plans. However, SFRA plans could be added in the future. “It definitely could be adapted to handle those special situations,” said MITRE’s Kevin Long. “It allows for a lot of flexibility. Every facility has nuances, and some have more than others.”

For example, because of Manassas’ location near Washington Dulles International Airport, every IFR departure must be assigned a standard instrument departure (SID). For piston aircraft, it will be the ARSNL 5 Departure. MITRE has to ensure that the correct SID is included in the expected clearance.

Controllers at Manassas won’t know which IFR pilots are participating in the test, and which are not. “That’s the way the FAA wanted it,” Diffenderfer said.

He expects to see improved communications at the airport during the test. “I would hope the controllers see a reduction in incorrect readbacks, and questions about the departure,” Diffenderfer said. “Pilots tell me having this information will give them more confidence.”

Pilots who participate will receive three emails from ForeFlight—an invitation to participate in the test, which requires reviewing and accepting its terms; the expected clearance; and a message with weather data. The expected clearance email will be received 30 minutes before proposed departure. “That’s when the tower gets the [flight] strip,” he said.

The clearance email includes a feedback link, which allows the pilot to indicate whether the assigned clearance matched the expected clearance. MITRE researchers will use feedback received from the test to determine whether any changes or adjustments are necessary to advance testing to subsequent phases, which will be designed to move toward a less verbal process for IFR clearance delivery.

Technical Editor
Mike Collins, AOPA technical editor and director of business development, died at age 59 on February 25, 2021. He was an integral part of the AOPA Media team for nearly 30 years, and held many key editorial roles at AOPA Pilot, Flight Training, and AOPA Online. He was a gifted writer, editor, photographer, audio storyteller, and videographer, and was an instrument-rated pilot and drone pilot.
Go to Mike Collins's Profile
Topics: Advocacy, Technology, Avionics