Get the app Get the app
AOPA Members DO more LEARN more SAVE more - Get MORE out of being a pilot - CLICK HERE
We will be performing maintenance on our systems Tuesday, 9/27, beginning at 12:00 A.M. ET and ending at 6:00 A.M. ET. During this time, you may experience intermittent service outages. We appreciate your patience.
News & Media Aviation groups urge FAA for clear, consistent ramp space charting

The heads of five major general aviation groups, including AOPA, sent a letter to FAA Acting Administrator Daniel Elwell asking the agency to standardize the labeling of airport ramp space and ensure that airport diagrams are clearly and accurately marked so pilots are better informed about available parking options. 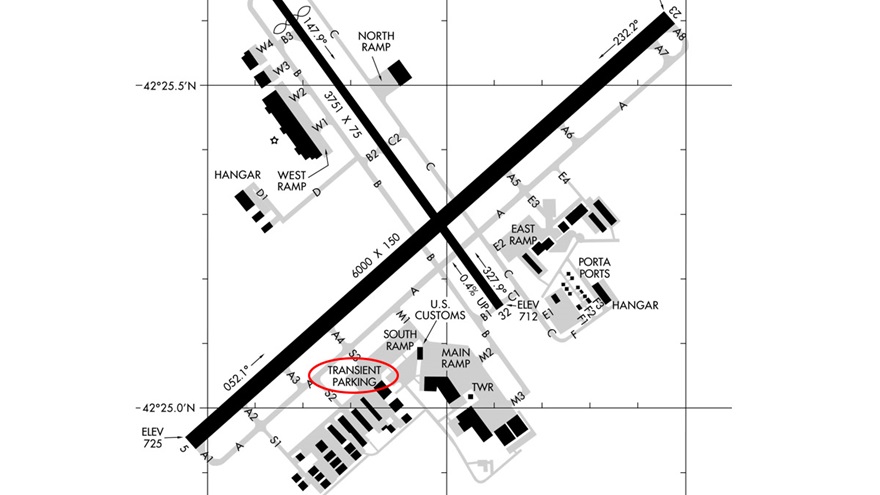 The airport diagram for Waukegan National Airport has been updated to show the transient parking area.

The letter stated, “We believe it will be very helpful to pilots to ensure that transient parking ramps are outlined on the Airport Diagram and have consistency with respect to standardized parking definitions and airport signage informing pilots of where these transient ramps are located.”

Many ramp areas, especially transient ramps, are often not identified on airport diagrams or not identified clearly. Many pilots and even airport staff are unaware of alternatives to fixed-base-operator-managed ramp space.

AOPA President Mark Baker said, “FBO fees and charges as well as ramp space charting are the two biggest areas that need some sunshine. It is totally unacceptable to be able to hide or make it difficult for pilots to know what they are paying for or where they can park at a public-use airport and not be charged for services or fees that were never requested or used. It’s just not right for the consumer, a pilot in this case, and we need to fix it.

“Many of these ramps were paid for in part by federal fuel taxes administered through the FAA’s Airport Improvement Program, and we didn’t spend that money only to keep them a secret.”

At an April meeting of the FAA’s Aeronautical Charting Forum, the group adopted an AOPA proposal that included standardizing labels for different types of ramps. That recommendation is currently before the FAA.

For more than a year and a half, AOPA has been investigating and fighting egregious and often unknown FBO fees that restrict airport access. AOPA believes that publicizing transient parking locations provides pilots with an alternative so they are not forced to pay for services at some FBO-controlled ramps that they don’t need or never requested.

Baker said, “Most FBOs do a great job and we need them and want them to be successful. At the same time, we simply want transparency and fairness and I am pleased that other groups are joining this movement. We want to grow this great industry and ensure that all pilots are not surprised by fees and charges and can make informed decisions and have knowledge about and access to ramp areas that they paid for through their federal fuel taxes.”

The letter was signed by the heads of AOPA, the Experimental Aircraft Association, the General Aviation Manufacturers Association, Helicopter Association International, and the National Business Aviation Association.

In early October, Signature Flight Support published some fees at most U.S. locations for pilots of piston aircraft. AOPA will continue to push Signature and other major FBO chains to publish fees for all aircraft, especially at airports that receive federal funding.