Get the app Get the app
Already a member? Please login below for an enhanced experience. Not a member? Join today
News & Media Study finds drones flying into danger

Researchers from Embry-Riddle Aeronautical University deployed DJI drone detection technology around Florida airports this year, gaining the first insight into the behavior of drone owners and some troubling data about potential risk to manned aircraft. 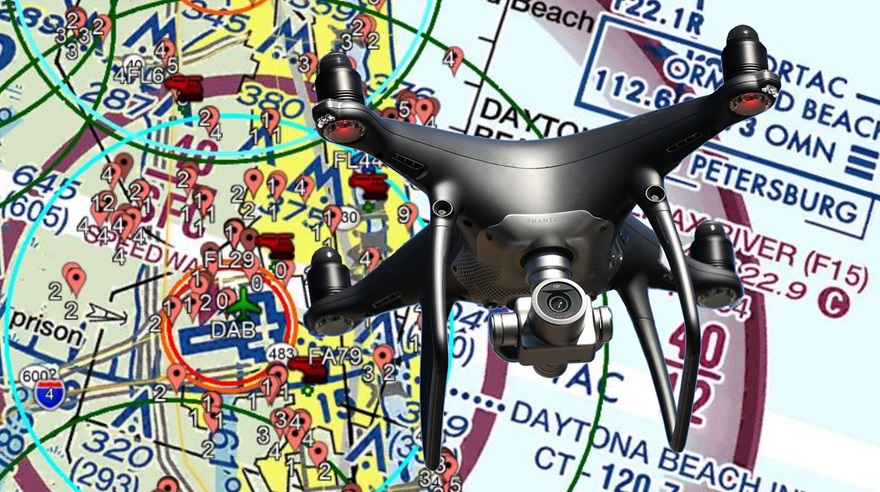 DJI has meanwhile adopted recommendations from AOPA and others to modify the electronic fence designed to keep drones separated from other aircraft.

The Embry-Riddle team deployed DJI’s AeroScope drone detection system on a building adjacent to Daytona Beach International Airport for 13 days in May, and proceeded to detect 192 individual drone flights made by 73 distinct aircraft systems, including 126 drone flights within Class C airspace, many of these far too close for comfort to runways and approach zones. Since AeroScope does not detect drones made by other manufacturers, it is likely that additional drone operations went undetected, though DJI has long enjoyed market dominance and probably accounts for 75 percent or more of the small unmanned aircraft systems (sUAS) currently in use.

The study’s lead author, Assistant Professor of Aeronautical Science Ryan Wallace, acknowledged several unknowns, including a relatively small sample of drone activity that is not necessarily representative of what may be going on in the airspace around these and other airports, and that it is not possible to know whether individuals who flew close to runways or runway approaches knew the danger they posed to others. The data, combined with manned aircraft flight data from the same period, suggests at least two relatively close calls between manned and unmanned aircraft.

“That was concerning,” Wallace said in a telephone interview. “In such a short snapshot, if that’s what’s happening in my local community, I’m very curious to see what’s happening in urban areas,” which are more densely populated, and typically have busier airspace as well.

Wallace said the study recently published in the International Journal of Aviation, Aeronautics, and Aerospace is the first of three, with data collected around two other Florida cities, Lakeland and Tampa, still to be published. Wallace said AeroScope deployments at those locations also detected a “high quantity of UAS,” and a “high flight frequency,” though he added, “I’m not going to say it’s necessarily representative across the United States.”

AOPA and the American Association of Airport Executives evaluated DJI’s geofencing technology, which is built into each of the company’s drones to discourage or prevent flights near the most sensitive areas such as runways. The company announced Oct. 24 that it was updating that technology in response to recommendations from the associations, also taking into account new restrictions contained in the recently passed FAA reauthorization.

AOPA Senior Director of Government Affairs Rune Duke said AOPA staff found that the DJI GEO System left some areas over-protected, imposing restrictions that do not enhance safety, and left other areas lacking adequate protection from drone intrusion. AOPA suggested that DJI model its exclusion zones on FAA Part 77 surfaces, which are tailored to each airport and designed to protect instrument approaches and runway traffic. AOPA also offered suggestions to enhance protection for heliports. Duke said the resulting changes by DJI are a step in the right direction.

Those changes include introducing new shapes to a geofencing system that was previously based on defining exclusively circular no-fly and warning areas. DJI added new shapes including “bow tie” safety zones to protect runway approaches, and complex polygons around other sensitive facilities. The company advised customers to update their software.

“AOPA applauds DJI's leadership in geofencing technology, and we appreciate their collaboration with our teams, to create safe and effective systems that allow all to safely enjoy the freedom to fly,” said AOPA President Mark Baker. “These latest improvements promote safe UAS integration in our aviation community by tailoring the geofence areas around each airport in a manner that has clear advantages for manned and unmanned operators.”

The Embry-Riddle research team suggested another step DJI could take: incorporating the limits for safe drone flights near airports defined by the FAA UAS Facility Maps, which were created with input from local air traffic control staff to divide controlled airspace into grid squares, each marked with a maximum altitude (400 feet, 200 feet, or zero feet) below which a drone could be authorized to fly without creating unacceptable risk.

The FAA, concerned about airspace incursions by drones, began implementing the Low Altitude Authorization and Notification Capability (LAANC) system in 2017, allowing remote pilots certificated under Part 107 to obtain authorization to fly in controlled airspace electronically. The LAANC system has been largely implemented at the busiest airports around the country, with the notable exception of Class D airports with towers staffed by contractors.

The Embry-Riddle research team compared local drone detection data (including initial position and altitude on first detection) with the grids, and found 38 of 177 flights detected within a UASFM grid square exceeded the maximum allowable altitude for drone flight denoted. (It is worth noting that LAANC was not enabled at Daytona Beach at the time of the study, so any legal drone flights would have required written authorization. Researchers did not attempt to quantify how many, if any, of the detected flights were, in fact, authorized.)

The team also compared their drone detection data to records of manned aircraft operations, “revealing several near encounters,” the published study states. An accompanying graphic indicates the closest of these drone approaches came within about 1,000 lateral and 1,000 vertical feet of separation. Arguably more troubling than that, the study details one instance in which a drone was detected at an altitude of 90 feet within a quarter mile of the approach path to Runway 7L at Daytona Beach International Airport, within seconds of an aircraft flying this approach and likely crossing through the drone’s detected altitude.

Several unmanned aircraft were detected within 1 nautical mile of Daytona Beach International, though data suggests two of these may have been prevented from flying by DJI’s built-in geofencing, which, prior to the most recent update, restricted flight within a circle that intersects each end of the longest runway at a given airport. Wallace said the team was unable to determine how or why other drone flights were allowed within a zone that requires users to provide documentation of FAA authorization before DJI will unlock the flight restriction that is designed to prevent the drone from taking off in a restricted zone.

“Unfortunately, that’s a major limitation of the study,” Wallace said. “At this point, we just don’t know.”

The research team concluded that geofencing is only as effective as the limits it imposes, and offering warnings or advisories without actually grounding the drone only goes so far:

“It should be noted that geofencing is not an industry-wide standard and such protections are not provided by all manufacturers. Moreover, the authors strongly assert that geofencing does not alleviate sUAS operators from proper flight planning and airspace compliance responsibilities. Geofencing primarily serves as a supplemental tool to aid sUAS operators in maintaining situational awareness and augmenting sound aeronautical decision-making and flight discipline. Nevertheless, the data clearly shows sizable reductions in detected sUAS operations in more restrictive geofenced areas. This suggests that geofencing zones are relatively ineffective at preventing or deterring operators from flying unless they impose operational restrictions.”