Get the app Get the app
AOPA will be closing at 2:30 pm ET on Friday, May 27, 2022, in observance of Memorial Day. We will reopen at 8:30 am ET on Tueday, May 31, 2022.
Already a member? Please login below for an enhanced experience. Not a member? Join today
News & Media FAA updates call sign policies

The FAA recently updated Advisory Circular AC 120-26M, Assignment of Aircraft Call Signs and Associated Telephonies, which explains the assignment and authorized use of aircraft call signs in the National Airspace System. The subject has become increasingly important as the FAA and aircraft operators move into the world of Automatic Dependent Surveillance-Broadcast (ADS-B). The update contains new procedures for medevac flights to use when declaring priority status with air traffic control; in addition, qualified flight schools will no longer be issued U.S. special call signs; however, they now can request a three-letter ICAO 3LD designator (local call signs still remain an option). 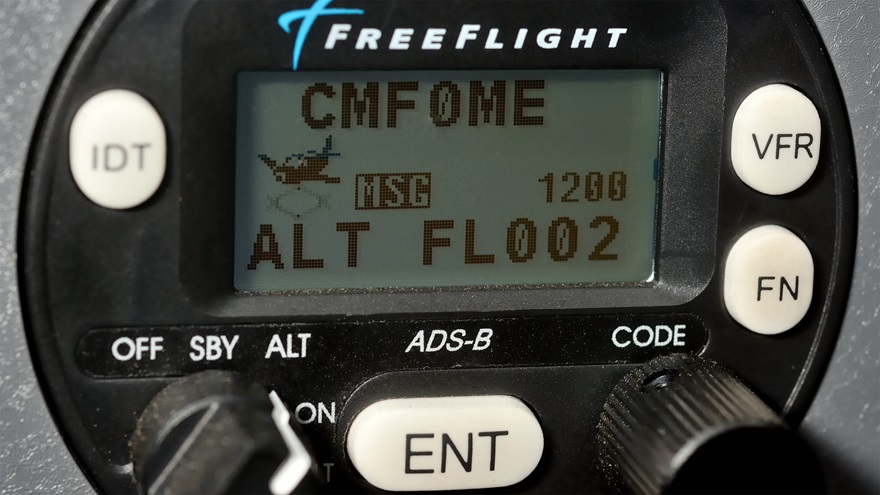 The control head of this Freeflight UAT shows that it is broadcasting CMF—the Compassion call sign used by authorized humanitarian organizations—as its ADS-B flight ID. That call sign would be used on the flight plan, and over the air the flight would be "Compassion Zero-Mike-Echo." Photo by Mike Collins.

The document clarifies that after Jan. 1, 2020, continued use of any FAA-authorized call sign—whether an ICAO 3LD, FAA local call sign, or U.S. special call sign—in the National Airspace System will require that the aircraft’s ADS-B Flight Identification (flight ID) match the aircraft identification filed in the flight plan. When the ADS-B call sign does not exactly match the call sign filed in the flight plan, controllers will receive a call sign mismatch (CSMM); the alert requires a controller response and can be distracting.

For aircraft operators authorized to use a call sign, the FAA strongly recommends using an ADS-B transponder that allows the pilot to change the call sign. Most 1090ES ADS-B Out transponders and some 978 UAT ADS-B transceivers allow pilots to edit the call sign, but in most cases that capability must be enabled or unlocked by an avionics shop. The FAA said that if an aircraft operator does not have a pilot-programmable ADS-B transponder, the FAA-authorized call sign may be used by presetting the flight ID in the ADS-B equipment before flight—if this is not possible, the pilot must use the aircraft registration number as the aircraft identification when filing flight plans and during radio communications. If the holder of any FAA-authorized call sign is unable to meet the ADS-B flight ID requirement, the FAA may rescind the call sign.

Pilots of civilian air ambulance flights that are requesting priority handling by ATC must now preface their aircraft identification with the word “medevac” in radio transmissions. When the pilot states “medevac” before any FAA-authorized call sign, ATC will provide priority handling; there is no additional flight plan filing requirement.

“AOPA provided significant feedback on the draft AC, in collaboration with the Air Medical Operators Association, and informally with the Air Care Alliance,” said Rune Duke, AOPA senior director of airspace, air traffic, and aviation security. “A lot of the wording was changed to be more reflective of the solutions available to pilots. This AC is the final guidance when it comes to the question of FAA's policy on call signs for charities—they will need to comply,” he added. “The FAA worked with us very closely on this.”

The advisory circular reviews the three types of call signs and includes application instructions for each. The ICAO 3LD, or three-letter designator, and associated telephonies are registered with and approved by ICAO, but operators must receive FAA authorization before using them. U.S. special call signs are issued by the FAA for certain flight operations, normally of short or limited duration, and will no longer be issued to flight schools. Local call signs are only authorized for local flight operations, and are specified in a letter of agreement between the operator and the local air traffic control facility (or facilities).

Although qualified flight schools will no longer be issued U.S. special call signs, according to the FAA, they can now request ICAO 3LDs, which do entail a $4,000 ICAO fee. Duke encourages each operator to review the new guidance and requirements, and make the best decision for their needs. “Some operators have changeable systems or never leave the local airspace, which makes the local call sign a good option,” he said.

The advisory circular makes clear that charitable organizations and flight servicing companies must obtain a security agreement from the FAA Air Traffic Organization’s system operations security before allowing third-party use of their ICAO 3LD. It also establishes new procedures for call sign requests by civil aircraft flights contracted through the Department of Defense as well as by U.S. Army National Guard/Reserve units.

The full text of the revised advisory circular is available online.

Technical Editor
Mike Collins, AOPA technical editor and director of business development, died at age 59 on February 25, 2021. He was an integral part of the AOPA Media team for nearly 30 years, and held many key editorial roles at AOPA Pilot, Flight Training, and AOPA Online. He was a gifted writer, editor, photographer, audio storyteller, and videographer, and was an instrument-rated pilot and drone pilot.
Go to Mike Collins's Profile
Topics: Advocacy, NextGen, Avionics