Get the app Get the app
Get the latest news on coronavirus impacts on general aviation, including what AOPA is doing to protect GA, event cancellations, advice for pilots to protect themselves, and more. Read More
Already a member? Please login below for an enhanced experience. Not a member? Join today
News & Videos Proposed FAA pilot urine study meets turbulence

AOPA, along with other general aviation advocates and airline pilot groups, raised objections to a proposed FAA study aimed at assessing drug use among pilots by anonymously collecting and testing their urine during physical exams.

In an April 3 letter to the FAA, the groups expressed their strong opposition to the study and requested that it be immediately shelved, writing: “Collectively, we strongly contend that the study: (1) is fundamentally flawed and will not accomplish its stated goals; (2) does not comply with applicable legal requirements; (3) represents a waste of valuable time, money, and limited resources; and (4) will further erode trust between the pilot community and the Office of Aerospace Medicine.”

The FAA study comes in response to a National Transportation Safety Board safety recommendation, A-14-95, that the agency assess the use of drugs among flying pilots not involved in accidents and compare the results with pilots who died from aviation accidents. In the letter, the pilot groups call on the NTSB to rescind that safety recommendation, which was put forward after post-accident autopsy reports suggested an increase in traces of medications and drugs found in pilots, even though the causes of the accidents were not medically related.

AOPA and the groups opposing the study are calling for the FAA to focus its resources on educating pilots about harmful drugs identified in toxicology reports, point them to safe alternatives, and not waste limited resources on a nationwide, multiyear drug study. The letter also renews a call for the Office of Aerospace Medicine to develop a comprehensive and robust list of medications and publish it online.

The letter noted that a pilot who is being examined for his or her first, second, or third class medical often has no intention that day, or possibly that week, of operating an aircraft. Pilots often renew their medical certificate when it best fits their schedule and before their current certificate expires. Medical exams are usually scheduled on days pilots are not flying, when a pilot may be taking cold (e.g. diphenhydramine), allergy, or other medication they would not use when flying an aircraft. Moreover, pilots undergo FAA medical examinations to maintain medical certificate currency but may refrain from flying during times of surgical recuperation, or short-term incapacitation. Test results of a pilot who has no intention of flying on the day of examination will be erroneously reported as those of an “actively flying pilot,” resulting in flawed and inaccurate conclusions, it said. 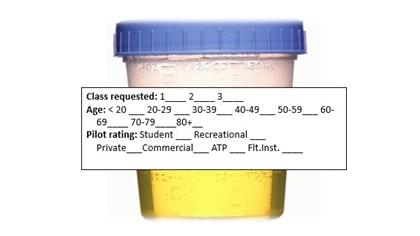 Privacy issues also are prevalent in the study. The industry groups say that the toxicology study violates federal regulations concerning research involving human subjects since the sampled pilot could be traced to a specific sample. “Even though the FAA removed the geographic location from the initial urine cup label, the CAMI lab and personnel will be able to identify not only the region the cup came from but also the AME office—further eroding the privacy protections of the study,” the letter stated.

“Our organizations’ members comprise the vast majority of pilots certificated by the FAA who regularly undergo medical examinations. They are the subjects whose urine will be taken and analyzed without their knowledge or informed consent, and whose FAA medical examinations will be directly impacted by this proposed study,” the letter stated.

AOPA is hopeful that the FAA will abandon the study and refocus its resources on outreach, communication, and education—areas in which we can partner and work with the agency to achieve improvements to aviation safety.