Get the app Get the app
Get the latest news on coronavirus impacts on general aviation, including what AOPA is doing to protect GA, event cancellations, advice for pilots to protect themselves, and more. Read More
Already a member? Please login below for an enhanced experience. Not a member? Join today
News & Videos Garmin provides datalink weather at Aero

Pilots in the United States might take datalink weather in the cockpit for granted, but in Europe it’s nonexistent for those flying below the flight levels. 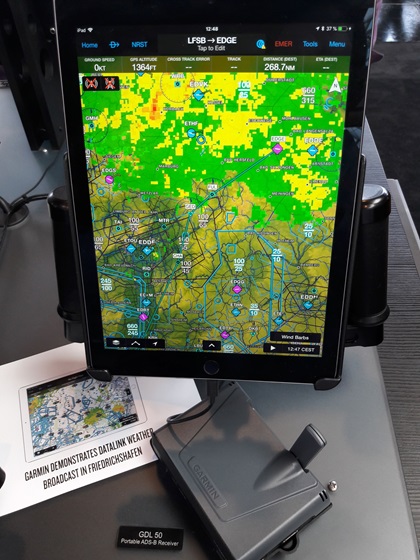 For the rest of the year, however, Garmin will provide Flight Information Services-Broadcast weather products to those flying near Germany's Friedrichshafen airport. It’s all part of a plan to influence European authorities to provide more and better traffic and weather products to European general aviation pilots. The Friedrichshafen demo is the first step in the plan.

Garmin installed a 10-watt UAT transceiver on the roof of a hangar used by AirPlus, Garmin’s dealer at the airport. The source data is delivered through Garmin, then sent from the AirPlus antenna. Nearby aircraft with Garmin Automatic Dependent Surveillance-Broadcast In (ADS-B In) equipment such as the GDL 88, GDL 39, GDL 50, or GTX 345 transponders (which can send weather products over a Bluetooth link to an iPad with the GDL 39 app, or other Garmin portable devices) can receive text data (metars and TAFs) as well as radar, lightning, icing, and winds aloft imagery within a 50-nautical-mile radius of the Friedrichshafen airport. Garmin confirmed that reception was excellent up to 8,000 feet agl.

Obviously, complete coverage of European airspace would require many more antennas of much greater power to enable a complete weather radar mosaic, but no one in Europe has yet committed to financing such an effort.

“The question is, ‘Who’s going to pay,’” a Garmin spokesperson at the event said. “We’ve approached EASA, and it would be great if they would support a network. But a commercial enterprise may also be able to finance the infrastructure.” There is a requirement for ADS-B equipage in Europe, but only for aircraft flying at higher altitudes.

Garmin has applied for permission to raise the current station’s transmitting power, and asked to install more transmitting stations in Germany. Dr. Michael Erb, vice president of Europe's IAOPA, said of the project, “We are convinced that the results of the datalink weather demonstration will be positive and that it can serve as a good justification for bringing in-flight weather, as well as traffic and AIS information, into all GA cockpits in Europe.”

AOPA Pilot Editor at Large
AOPA Pilot Editor at Large Tom Horne has worked at AOPA since the early 1980s. He began flying in 1975 and has an airline transport pilot and flight instructor certificates. He’s flown everything from ultralights to Gulfstreams and ferried numerous piston airplanes across the Atlantic.
Go to Thomas A. Horne's Profile
Topics: Avionics, AERO Friedrichshafen Battle of the bandwidth