Get the app Get the app
Get the latest news on coronavirus impacts on general aviation, including what AOPA is doing to protect GA, event cancellations, advice for pilots to protect themselves, and more. Read More
Already a member? Please login below for an enhanced experience. Not a member? Join today
News & Videos Alaska restricted airspace changes coming in October

A new restricted area in Alaska and the long-planned expansion of an existing restricted area will change the way many general aviation pilots navigate after the changes take effect in October. 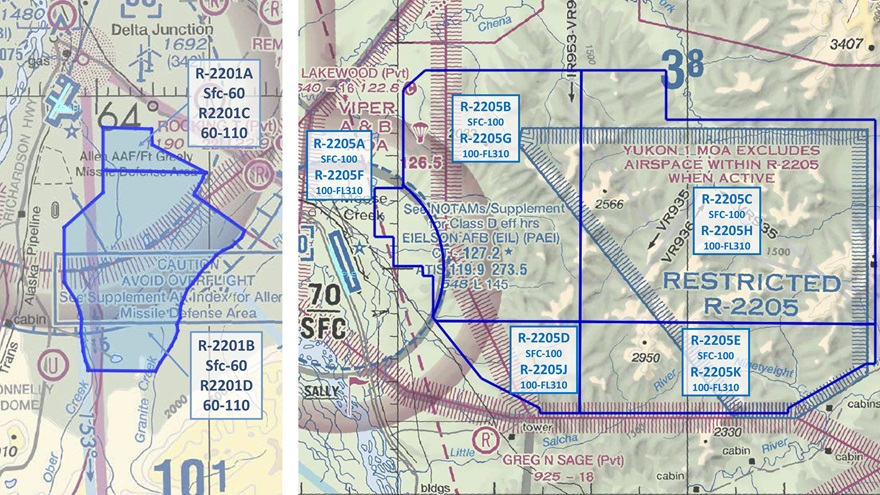 New and revised restricted areas will take effect In Alaska in October. Graphics courtesy of the FAA.

The FAA has established restricted area R-2201, in four segments lettered A through D, near Big Delta to protect non-military aircraft from live artillery fire and other military training activities. Pilots should note that the airspace change will constrict GA traffic headed to or from Isabel Pass, one of the major VFR routes through the Alaska Range that connects interior and south-central Alaska.

The changes formally take effect Oct. 10, but the FAA agreed with AOPA’s request not to activate them until Nov. 7 when the next sectional chart for the area is published. In the meantime, pilots are urged to study the changes and revise their flight planning as necessary.

The restricted areas are airspace components of the Joint Pacific Alaska Range Complex (JPARC) where national and international training exercises known as Red Flag are conducted.

AOPA participated in a Safety Risk Management Panel that studied the proposals and worked with other national and Alaska-based organizations to advocate for a scaled-back version of the original airspace boundaries.

“AOPA and the Alaska Airmen Association were successful in getting the requested airspace for the restricted area near Big Delta reduced by almost 50 percent of the original proposal, and configured to include a VFR corridor for traffic headed to or from the mountain pass to the south,” George said.

AOPA also succeeded in pressing for a requirement that procedures giving civil aviation access to the airspace when not restricted for the military be developed and shared with the public. Real-time information on the activity status of the airspace will be shared though the Special Use Airspace Information Service operated by the Air Force in support of JPARC, he said.

The FAA also responded to AOPA’s proposed reconfiguration suggestion that simplified R-2205 to avoid inadvertent airspace violations by providing a corridor along the Trans Alaska Pipeline for routine pipeline inspections by aircraft.