It’s all for the kids

You say you don’t believe in Santa Claus? In Michigan you’d be proven wrong. Very wrong.

For the past 49 years on the first weekend in December, Santa has been a general aviation pilot. And he’s flying a Beechcraft Bonanza. Or a Cessna 172. Or a Cherokee Six. Maybe even an experimental Defiant. If it flies and it’s got room for gifts, any trusty aircraft will do. It’s called “Operation Good Cheer,” and from humble beginnings to its biggest year to date on December 7, this statewide event proves that yes, there really is a Santa Claus.

Oakland County International Airport was overrun with aircraft, pilots, trucks, and presents. Lots and lots of presents. The massive hangar at Pentastar Aviation was stocked with wrapped presents piled more than 10 feet tall, and rows and rows of bicycles lined the floor. This year 256 aircraft arrived on a cold Saturday morning to load more than 25,000 gifts to transport to 31 airports across the state, bringing the joy of Christmas to 7,159 children.

Longtime volunteer Paul Zerkel summed it up: “This is all for the kids.”

There are more than 13,000 children in foster care in Michigan. “Children coming into the care of social service agencies are often at their most vulnerable, having the transition of being removed from the only family they have ever known, to being placed in a different home with a different family, sometimes in a different school, and experiencing different lives entirely,” said Sherry Brackenwagen, administrative director of Child and Family Services of Michigan Inc. “Operation Good Cheer strives to make the transition a little easier by showing these children that there are caring people in the community who are thinking about them at Christmas.”

Brackenwagen’s staff receives “wish lists” from the children in the 79 participating agencies. They list six gifts they wish Santa would bring, but donors are only asked to contribute three. (“No one ever gives just three,” Zerkel confided.) The gifts are wrapped and sent, or hand-delivered to the Pentastar hangar on Friday. Volunteers spend the day unloading truckloads of presents, sorting them by numbers and letters that will ensure the right gift gets to the right child. That in itself is a massive logistical undertaking. But somehow this coordinated chaos works, and when aircraft begin arriving at sunrise on Saturday morning, the gifts are ready to be loaded.

Pilots check in, chose the location they’d like to fly to, are given the number of the truck with their gifts, and taxi to the truck. Volunteers pack the aircraft with presents (“I once transported 13 bikes,” one pilot said) and taxi to join a conga line of aircraft heading back out to fly across the state. Locals like to show you their hand when describing the shape of Michigan; Pontiac is down between your pointer finger and your thumb. Aircraft will fly as far as the top of your ring finger. IFR pilots will choose those locations farther north where weather could be an issue, but most pilots fly VFR.

The event is never canceled; if aircraft can’t fly, the presents will be trucked across the state. “But a GA flight is much more desirable,” said Dean Greenblatt, a volunteer organizer and pilot. 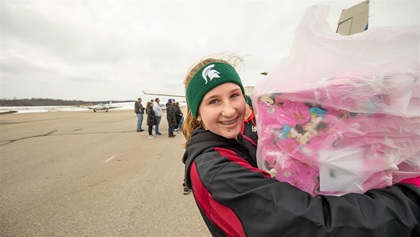 At locations such as Roben-Hood Airport in Big Rapids hundreds of local families wait for the arriving aircraft. They form another conga line to transfer the presents from aircraft to a storage shed or other trucks. There’s snow on the ground, hot chocolate and homemade goodies in the small terminal, and holiday music playing. Some of the children are foster kids getting the first peek at what will arrive on Christmas Day. Chad Saxton of Eagle Village tells of a foster teen in his organization who quietly held on to her gift.

“You know how kids grab and rip open packages? She just held it and slowly unwrapped it telling me that although her mother had tried hard, she’d never been able to give her a Christmas present. This was her first gift,” he said.

“While the event is exciting, with so many people having the spirit of giving, it’s really about creating an environment where these kids feel loved on Christmas morning,” said pilot Jerry Fullmer. “The sad reality is they are removed from their homes and have been abused and neglected. Many have been abandoned and don’t know what it feels like to have someone who has their back. Well, they will know that we have their back. We want them to experience the feeling of hope.” 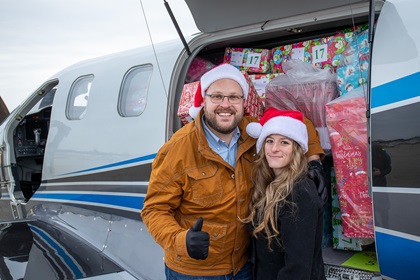 Air traffic controllers volunteer their time on Saturday morning because while Oakland County International Airport may see 600 operations in an 18-hour period, it only sees this kind of activity once a year, said ATC manager Rob Wagner.

The whole business started when Ford Motor Co. engineer Constantine “Taki” Kortidis received Christmas cash to put together a company party. He thought the money would be better spent on children. So—making a long story short—he eventually volunteered to buy Christmas presents and fly them in his Cessna to needy kids in Michigan. Some 66 children in foster care benefited from Kortidis’s kindness that year. Kortidis died several years ago, but his program continues—and volunteer staff proudly display his photo throughout the Oakland County terminal and in the Pentastar hangar.