The FAA has proposed establishing the first low-altitude RNAV terminal transition routes, or T-routes, in Hawaii based on designs produced by a collaboration between air traffic control and local pilots. 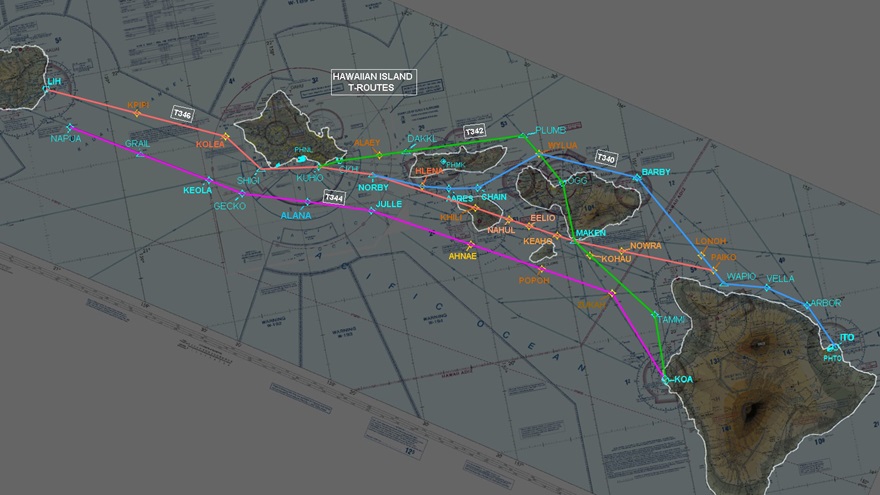 A depiction of the first T-routes proposed for Hawaii. Graphic courtesy of the FAA.

On December 12, the FAA published notice of its plan to establish the four new T-routes that would improve on legacy routings constrained by mountains and the placement of navaids.

The T-routes feature lower minimum en route altitudes and reduced “track miles.” The route layouts originated with the General Aviation Council of Hawaii and were “later supported by other national and local aviation user groups,” the FAA said in its filing, noting its own support for the concept.

In a “worst-case scenario” with Honolulu’s ATC facility losing surveillance and communications capability, the routes would “allow Oakland Center the ability to provide procedural separation services to users in Hawaii,” the FAA said.

The FAA will accept public comments on the T-route proposal until January 27.

AOPA participated in the T-route project by hosting several webinars with low-altitude operators and GA pilots, helping the design take shape during the summer of 2018. The design submitted to the FAA was produced using Terminal Area Route Generation and Traffic Simulation (TARGETS) software.

“We are happy to see the proposed routes match up very closely with what stakeholders asked for. These routes are a positive result of the close collaboration between air traffic control and local pilots,” said Rune Duke, AOPA senior director of airspace, air traffic, and aviation security.

“Due to mountainous terrain, and the location of navigational aids and radar sites, several routine routes between airports in the 50th state require higher altitudes and diversions costing aircraft owners time and money and decreasing safety by sending aircraft farther offshore than necessary,” he said. “With the arrival of ADS-B, and the new T routes, shorter and safer routes between islands are now possible, and will benefit the entire flying public.”

Comments on the proposal may be submitted by January 27 online or by mail to the U.S. Department of Transportation, Docket Operations, 1200 New Jersey Avenue SE, West Building Ground Floor, Room W12-140, Washington, DC 20590. Please identify FAA Docket No. FAA-2019-0900; Airspace Docket No. 19-AWP-80 at the beginning of your comments.