Get the app Get the app
Already a member? Please login below for an enhanced experience. Not a member? Join today
News & Media Graceland: Tour 'The King's' aircraft

Editor's note: We recommend listening to the 1973 'Elvis Aloha from Hawaii' concert while reading.

Whether you are an aviation, music, or American history enthusiast, there’s something to interest you at Elvis Presley’s Graceland home and museum in Memphis, Tennessee, where two of his jet aircraft are on display.

My wife, Lisa; teenage daughter, Lauren; and Border Collie, Happy, were delighted to make a pilgrimage with me to the property that “The King” called home for most of his entertainment career.

Lisa loved the house tour that was enriched by an iPad accompaniment that explained details and background. The trophy room topped my daughter's list because she learned about “all of Elvis’s accomplishments and got to know his family.” Happy apparently enjoyed the pet-friendly Guest House at Graceland, across the street from the museums. We didn’t hear any complaints—from him or other guests.

As an aviator I was impressed by the jets—which are hard to miss—but they do require an additional $5 ticket to tour them. I marveled at the complicated cockpit controls that pilots Elwood David, Milo High, and Ron Strauss commanded while flying the star to and from his many live performances.

The Convair 880 Lisa Marie, a passenger jet previously owned by Delta Air Lines that Presley purchased for $250,000 and renamed after his daughter, is the center of attention at the aircraft compound across the street from Graceland Mansion.

Visitors can stroll through what he called his “Flying Graceland,” a four-engine commercial jet that was the General Dynamics Corp. equivalent of a Boeing 707—the aircraft model Presley preferred to own until a 707 deal fell through. Nonetheless, he sang about the Boeing’s power and grace in Early Morning Rain, written by Gordon Lightfoot.

The pet-friendly Guest House at Graceland is across the street from the museum and exhibit grounds. The $75 nightly room rate through AOPA’s Priceline affiliation was a deal. The four-star hotel has a free shuttle bus that whisks visitors to the main entryway; shuttles then take visitors to and from the Graceland mansion.

You can view Presley’s pink Cadillac and additional automobiles, motorcycles, and stage outfits on display at Graceland.

Tours begin at $41 for adults with discounts for seniors and children; the aircraft exhibit is an additional $5.

Devotees gather at Graceland on the singer’s Jan. 8 birthday to light candles and leave mementos.

Olive Branch Airport across the state line in Mississippi a few miles south of Memphis is a Class D airfield with a north-south runway and two FBOs.

General Dewitt Spain Airport is a nontowered airfield with a scenic Mississippi River approach to Runway 17/35 near a hard-to-miss bend in the waterway. It typically has some of the cheapest fuel around.

Barbecue lovers have their pick of joints. Corky’s Ribs & BBQ, Central BBQ, and the Bar-B-Q Shop were some of the standouts cited by TripAdvisor.

Presley felt personal jet travel would simplify his transcontinental commutes during a productive period from 1969 through the late 1970s known as his “concert years."

After acquiring the Convair, the musician personally supervised an $800,000 refurbishment; many of the jet’s eye-catching features were advanced concepts for their time. He designed an audio-visual system with floor-mounted speakers; a conference room with an oblong wooden table and seven chairs; a bar area—stocked with sodas and Gatorade for Presley—and alcohol for his guests; and televisions, which have since been incorporated into business jets and modern airliners alike.

“The King” chose the fabric—including blue suede for a couch, easy chairs, and other accents—and his wife Priscilla helped with other design flourishes. It’s unknown whose hand dictated the 24-karat-gold-trimmed bathroom fixtures and seat belt hardware. The white-and-blue jet has a distinctive “TCB” logo and lightning bolt on its tail, a reminder of Presley’s “Taking Care of Business” logo and mindset.

The model was powered by 11,200-shaft-horsepower General Electric CJ-805-3 turbojet engines; attained a cruising speed of 615 mph; and had a maximum takeoff weight of 193,000 pounds, a range of 2,880 miles, and a wingspan of 120 feet, according to Jane’s Encyclopedia of Aviation.

The same Fort Worth, Texas, crew that worked on Air Force One transformed the 94-passenger jet into a personalized work of art that could accommodate 29 family members and friends in comfort and style. The singer dispatched the jet to carry him and his entourage to more than 1,100 live performances in the United States and Canada. One of Presley’s most renown performances was televised live from Hawaii, but he did not perform overseas.

A Graceland docent said Memphis International Airport air traffic controllers would often welcome N880EP back to the field as “Hound Dog One” in recognition of an early No. 1 tune.

The singer’s smaller 1960 Lockheed JetStar, Hound Dog II, is ramped adjacent to the luxury airliner. It was also decorated by Presley but in a 1960s mod-era color palette of green, turquoise, and yellow. The swift jet with four engines mounted on two fuselage pods could accommodate 10 passengers and two pilots, and it was a superstar trendsetter in its heyday. The $899,702.60 purchase was primarily used by manager “Col.” Tom Parker and advance team members who scrutinized Presley’s planned tour stops.

The JetStar was powered by 3,300-shaft-horsepower Pratt and Whitney JT12A-8 turbojet engines; attained a cruising speed of 547 mph; and had a maximum takeoff weight of 44,500 pounds, a range of 3,189 miles, and a wingspan of 54.5 feet, according to Jane’s Encyclopedia of Aviation.

Hear the mighty engines roar, see the silver wing on high, she's away and westward bound, for above the clouds she flies, where the mornin' rain don't fall, and the sun always shines.—Gordon Lightfoot

Presley appeared in 31 films between 1956 and 1969 and was one of Hollywood’s top box office draws. In one of his less memorable roles, Presley starred as a crop dusting Boeing Stearman pilot in the 1963 major motion picture, It Happened at the World’s Fair.

Presley has been credited, even in death, as one of the highest-earning celebrities. It’s hard to argue his popularity with nearly 80 million YouTube views of Suspicious Minds.

The Rock and Roll Hall of Fame inducted Presley in 1986. The organization noted that he “kicked off a musical revolution” by modernizing blues, country, bluegrass, and in later years gospel music, for younger audiences. His stage swagger, swiveling hips, and crossover appeal laid the groundwork for scores of musicians to follow. Television, still in its adolescent stage in the early 1960s, often videoed the Tupelo, Mississippi, icon from his waist up to avoid the “then-scandalous hip-swings and body contortions” he deployed to energize crowds. “It’s difficult to overstate Elvis Presley’s influence on music and culture,” the organization noted. “Elvis Presley is, quite simply, the king of rock & roll.” 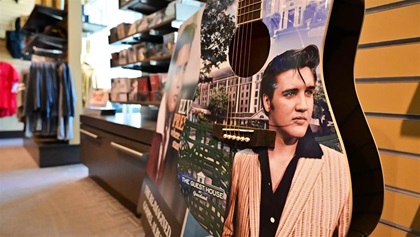 Heartbreak Hotel, a No. 1 pop record in 1956, was the first of several tunes that propelled Presley to the airwaves and sock hops of the day. Don’t Be Cruel, Love Me Tender, and Hound Dog paved the way for All Shook Up, Jailhouse Rock, and other early No. 1 songs.

The Memphis Commercial Appeal announced “a new era” during preparations for the fortieth anniversary of the musician’s death when Graceland expanded to an entertainment and museum complex across the street from the mansion and housing compound in March 2017. Presley’s stage outfits, motorcycles, automobiles, records, and a retail store are part of the new facility, which replaced a raucous retail strip that had stood since the 1980s.

Graceland estimates that “over one billion" Elvis records have been sold worldwide across every musical format from vinyl to digital.

He owned five aircraft during his career, including a Grumman Gulfstream G–1 that he originally bought for Parker, an Aero Jet Commander, and a Dassault-Falcon jet.

Presley was born Jan. 8, 1935, and died at his Graceland Mansion home on Aug. 16, 1977. The Lisa Marie’s final journey carried Presley's wife, his daughter, and the singer’s father Vernon from California to the musician’s Memphis funeral. He is interred at the meditation garden. 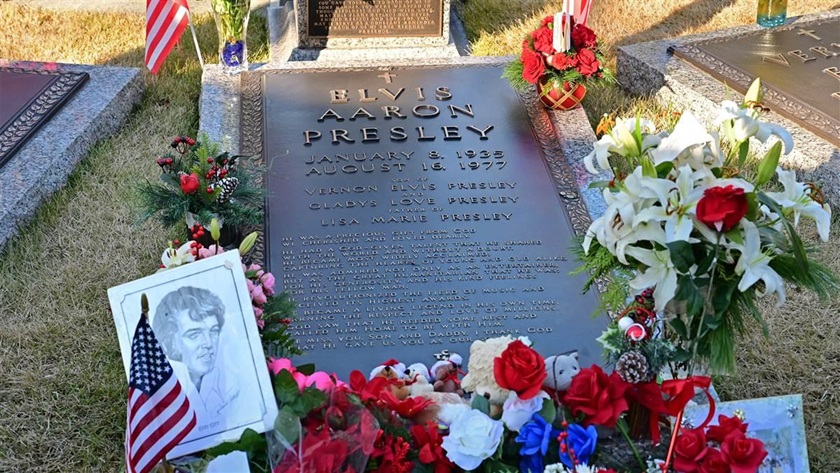