Former Delta Air Lines executive Steve Dickson took a step closer to becoming the next FAA administrator after the Senate Commerce Committee voted on July 10 to move his nomination forward. 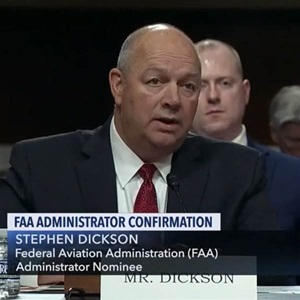 Although President Donald Trump's nominee to lead the FAA is widely viewed as highly qualified, his nomination ran into some recent turbulence when it was reported that he failed to include on the Committee’s nomination questionnaire a situation involving a past complaint filed by a Delta Air Lines pilot who claimed she was retaliated against by the carrier after she reported concerns about safety issues.

The Committee approved the nomination along party lines with a 14-to-12 vote that advanced Dickson’s nomination to the full Senate for final approval.

Former U.S. Air Force combat pilot and American Airlines pilot Daniel K. Elwell has been leading the FAA as acting administrator since January 2018, when he was appointed to take over for Michael Huerta at the conclusion of Huerta's term.