Get the app Get the app
Already a member? Please login below for an enhanced experience. Not a member? Join today
News & Videos FBO fees published in AOPA Airport Directory

A new tool in the AOPA Airport Directory is the first step toward a one-stop portal for pilots and fixed-base operators in the quest for fee transparency at airports. 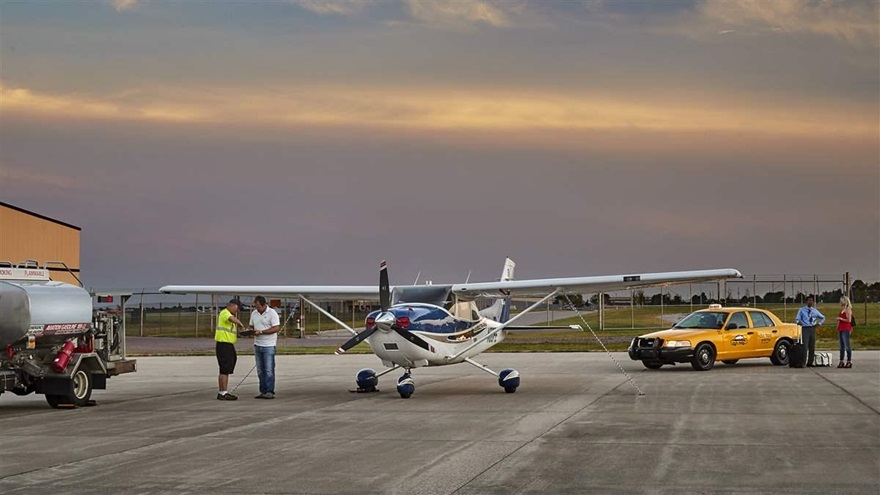 FBOs can enter their fees into the AOPA Airport Directory, and pilots can access that information for free, allowing them to decide where to land for affordable services.

“Transparency is a key step forward,” said AOPA General Counsel Ken Mead. “I think it is really great that the aviation industry is coming together, with steadily increasing cooperation from the FBO industry to disclose fees through this modernized tool—but we still have a long way to go.”

The new FBO-fee structure information listed for individual airports in the AOPA Airport Directory debuted June 10 and includes more detailed fee information than ever published before. The directory is viewed approximately 47,000 times each month by pilots planning their flights. Using mail and email, AOPA has begun an industry-wide outreach campaign to FBOs across the country, encouraging operators to post their fees in AOPA’s directory. Ultimately, AOPA encourages FBOs to voluntarily and proactively update their fees in the directory.

AOPA has categorized FBO fees into 36 types in the Airport Directory. These fees are common across the FBO industry; not all FBOs charge all of these fees. The fees are ordered from most common to least common.

“Our goal, which I am certain FBOs will agree with, is to get more pilots to fly more often and to visit more airports. Knowing what they will have to pay and what options are available before they go is what customers simply expect from any industry, including every part of aviation,” said Jiri Marousek, AOPA senior vice president of marketing. “There should be no surprises. And AOPA’s Airport Directory helps pilots using any device to find the fees, get the information about an airport they want to fly to, and get going. No phone calls necessary. Consumers today expect to be able to get pricing for any product online or on their phone, and that is what we are providing them. Nothing less.”

AOPA advocated for FBO fee transparency to help pilots make the best choice of an airport or business to patronize at a destination and let pilots find out before flight whether fees may be imposed even if no services are required. The industry-wide effort to make FBO fees more transparent picked up steam in the past two years, with increasing support from industry groups to address “a very important problem that was overlooked for far too long,” AOPA President Mark Baker noted in May.

The directory now contains about 40,000 fees from FBOs and information about more than 5,200 public-use airports in the United States. The updated listings give FBOs a new way to participate in the Know Before You Go initiative—a campaign encouraging FBOs to adopt a set of General Aviation Industry Best Business Practices supported by organizations that represent “the vast majority of the general aviation community in the United States.”

Pilots can access participating FBOs’ listings from an airport’s page in the directory, which now includes a “fee details” section that allows pilots to filter fee listings based on the general kind of aircraft they fly, such as single-engine piston, multiengine turbine, or jet, to name a few. An AOPA member who is logged in to AOPA Online can elect to have the aircraft choice saved for future use.

The information upgrade was the product of a cooperative effort: AOPA staff analyzed fees charged across the FBO industry and consolidated 120 different types of charges encountered into 36 standardized types used by more than 95 percent of FBOs—fees for such items as after-hours service, engine preheating, hangar fees, tiedown, deicing, and ground power unit (GPU) rate per hour, all including seasonal pricing differences and weekday or weekend fluctuations, said Eric Rush, director of AOPA’s Project Management Office.

About 30 percent of all fees listed in the directory have a cost modifier, such as a waiver, discount, seasonal difference, or upcharge. For example, many FBOs waive fees when pilots purchase a minimum quantity of fuel. These common cost modifiers are also noted in a standard format in the directory.

“Our new fee structure more clearly shows if a waiver is available and the minimum fuel quantity based on the type of aircraft,” Rush said. “Other cost modifiers are detailed in the ‘Notes’ section for each fee.”

Some suggestions for providing the added fee transparency came from FBOs themselves, he added, noting that the idea of filtering fees based on the kind of aircraft involved originated with FBOs.

Participating in fee transparency could enhance an FBO’s competitive position while putting the pressure on non-participating businesses to get on board. Most FBOs have the ability to post their fees on their own websites—but the AOPA Airport Directory reaches pilots who may not know of a particular FBO at their destination.

Another benefit of participation for FBOs, Rush added, is that “leading navigation app and avionics companies utilize our data in their apps and tools.” One of those leaders is Garmin, which has announced including information from AOPA’s Airport Directory in the Garmin Pilot EFB app.

The work to enhance transparency and competition in the industry continued in Washington, D.C., on June 17 when the Airport Access Advisory Panel formed by AOPA in 2017 met to chart its next steps. The group, a cross-section of the general aviation industry, has a goal of working with the FAA, elected officials, airport leaders, pilots, and FBOs to develop airport-access policies as well as improve FBO transparency, pricing, and competition.

In addition to making FBO fees transparent, the panel is focusing on getting all transient parking areas at airports charted with standardized naming conventions.

“Giving pilots access to all FBO fees and charting areas where they can park are ground-floor steps that must be taken,” Mead said.

Another effort to increase transparency, the “Know Before You Go” best business practices released in 2018, were the focus of a recent report in the spring edition of the National Air Transportation Association’s Aviation Business Journal, characterized by Josh Hochberg, owner of California’s Sonoma Jet Center and chairman of NATA’s Airport Business Committee, as a win-win solution.

“We appreciate NATA’s distribution of the ‘Know Before You Go’ best business practices through its journal,” said Mike Ginter, AOPA vice president of airports and state advocacy. “Their encouragement to FBOs to post their fees in AOPA’s directory will make a difference. Having FBOs and pilots on board really will make this effort a win for everyone.”

Larry Wade, who attended the June 17 panel meeting as a guest of NATA, has been one of the early adopters in listing FBO fees in AOPA’s Airport Directory. Wade is an AOPA member and president and partner of the Golden Isles Aviation FBO at St. Simons Island Airport in Georgia

A component of the best business practices of Know Before You Go is “eliminating any misunderstanding or miscommunication” on fees and charges pilots might be levied.

“We want FBOs to be a voluntary part of the program, and voluntarily put the information out there, and be good players,” Rush said.

“It has been a pleasure working together with NATA and others in the industry. We have a long way to go, but we have made progress on FBO pricing transparency and the industry-supported voluntary ‘Know Before You Go’ program,” Ginter added.

The largest FBO chain, Signature Flight Support, posts piston aircraft fees online at most locations, but still has not provided similar information for turbine-powered aircraft. “AOPA and the pilot community are waiting for further transparency—those fees need to be posted,” Mead said. “Other FBOs are posting their fees. Signature and the other large chain FBOs should follow suit and provide an open window into their prices, fees, and related charges.” 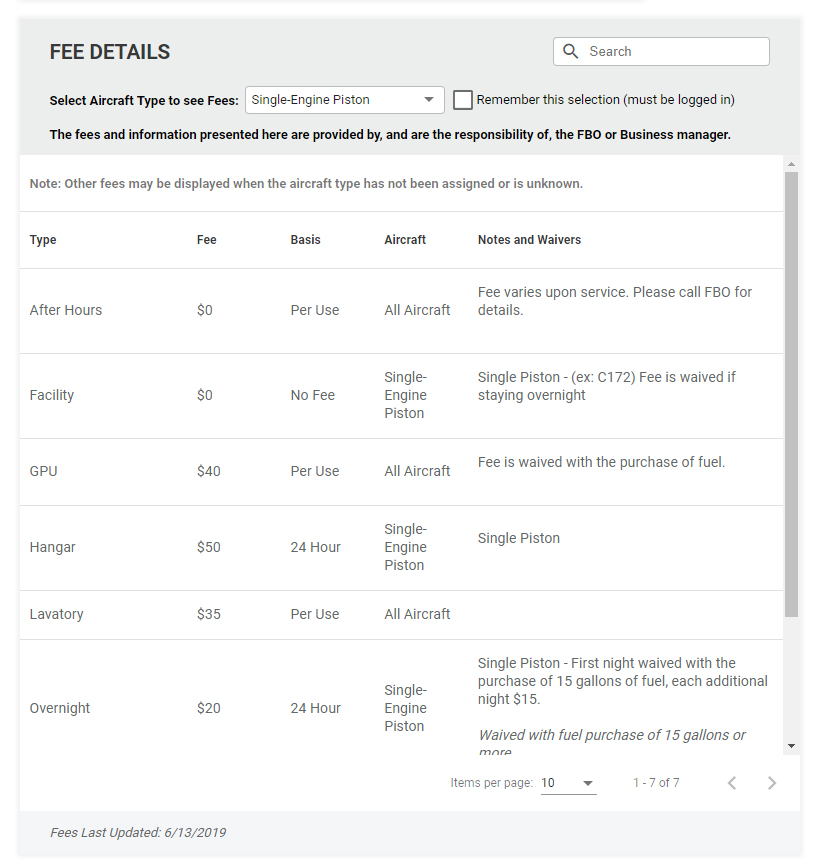