Get the app Get the app
Already a member? Please login below for an enhanced experience. Not a member? Join today
News & Videos D-Day doc in production

A squadron of vintage warbirds, flight crews, mechanics, logistics specialists, weather forecasters, jumpers, and many others flew across the Atlantic to honor D-Day veterans on the seventy-fifth anniversary of that turning point in history. A documentary film crew captured it all. 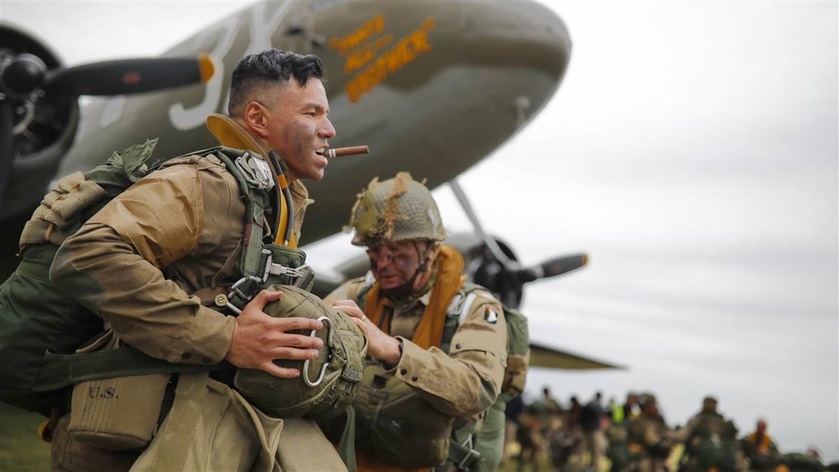 The D-Day Squadron was the brainchild of Eric Zipkin, who was inspired by the seventieth anniversary commemoration to go bigger in 2019. He gathered a group of friends to create the Tunison Foundation, a nonprofit organization named for World War II veteran Ed Tunison, who served as the radio operator aboard the C–47 Placid Lassie, which flew to Normandy in 2014 to take part in events commemorating the seventieth anniversary of the Allied invasion of Europe that marked the beginning of the end of the war. Tunison flew aboard Placid Lassie that year, taking a turn at the controls and fueling the inspiration of those who made it possible. Tunison died in 2016. The following year, the Placid Lassie crew named the new nonprofit to honor him.

From the foundation sprung the D-Day Squadron, a massive undertaking supported by a fast-growing team. More than 20 DC–3 and C–47 (the military version of the famous Douglas Aircraft that had already made history in the prewar years as the first modern airliner) operators around the country began preparing to follow Placid Lassie across the Atlantic and drop paratroopers once more onto the historic drop zones as the world paused to watch, and remember.

AOPA helped spread the word, starting in 2018 when Placid Lassie graced the pages of AOPA Pilot to pass the word about the plan. AOPA Technical Editor Mike Collins brought us along for the ride to  jump school in February; in April, AOPA Senior Manager of Media Relations Jennifer Non hopped aboard That’s All, Brother (another of the D-Day Squadron aircraft, and the lead aircraft of the main airborne assault on June 6, 1944), and still there was much more story to tell.

In May, the D-Day Squadron dispatched aircraft and jumpers to Frederick, Maryland, for AOPA's homecoming Fly-In, where veteran Franklin Payne climbed aboard Placid Lassie and left a lasting impression in every sense of that phrase. We then followed the squadron to Oxford, Connecticut, where Zipkin built a charter business from a single aircraft into a sprawling operation, and also where aircraft and crews gathered to prepare for another Atlantic crossing in May.

For all the stories we have told, including the preparation of Miss Montana and the events of the June 2019 anniversary itself, when That’s All, Brother took up its historic position in the very front of the lead element, we are told there remains much more to this story.

The Tunison Foundation is now raising money to support the completion of a documentary film. Camera crews embedded with the squadron filmed interviews with many of the veterans with firsthand knowledge of the remarkable events of June 6, 1944, capturing their perspective for future generations, along with a unique, behind-the-scenes perspective with more stories yet to be told. You can watch the film's teaser (extended trailer), and make a tax-deductible donation to support the film’s completion online.