May have helped find pilot who ditched in Bahamas

The FAA has long touted improved search and rescue as a benefit of ADS-B, which can provide accurate and timely last-reported positions. 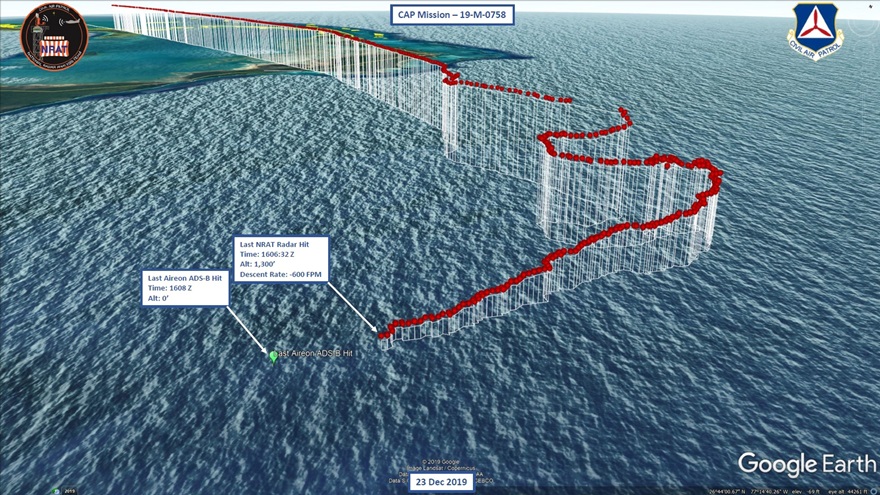 Not only are such stories beginning to surface, but Aireon’s space-based ADS-B service, which is only compatible with 1090ES systems, has shown an ability to help as well—especially in areas where ground-based ADS-B data is not available.

Don Hinkel was flying over the Bahamas on December 23 when the engine of his 1981 Cessna P210N failed. It would not restart, said Hinkel, who lives in the U.S. Virgin Islands and regularly flies back and forth to Florida. “I activated an onboard ELT when I realized that I was in serious trouble at 17,000 feet. Upon ditching, I activated an EPIRB [emergency position indicating radio beacon] and left the plane with it in my hand.” He was holding the beacon when the U.S. Coast Guard picked him up more than two hours later. The Cessna also was equipped with ADS-B Out.

Hinkel touched down on the tail first, then the airplane—with its landing gear retracted—slid on its belly. “Being a pressurized cabin, it remained afloat about 15 minutes,” he estimated. The raft he carried got stuck on egress, however. “I must have torn it pulling it out of [the] cabin.”

The Cessna’s ELT [emergency locator transmitter] was a newer 406-MHz unit, with a low-power 121.5-MHz transmitter for local homing. A Garmin Mode S transponder provided ADS-B Out. “It was a nice aircraft,” he said. His beacon is an ACR MicroFix PLB personal locator beacon with current registration.

The all-volunteer team performs radar forensics on missing aircraft, Young explained. The team got its start in 1997, when an Air Force A–10 went down in Colorado and was missing for three weeks. Guy Loughridge, a team lead, wrote software for tactical fire mapping; he adapted available data, made it 3D, and superimposed it on a topographical map—finding the A–10. The team has completed about 1,000 missions, and members are approaching 100,000 hours programming their software. In 2003, notification to location determination took six to eight hours. Access to the FAA’s ADS-B data was added, then NRAT got access to Aireon’s satellite ADS-B data. Last year it took Young’s team 20 minutes to run a data request; now it’s four to five seconds. “We’ve got the best experts in the world at radar forensics and programming,” he said.

The Cessna 210 ditched at 1608:25Z. “In this particular search it started as a Bahamian mission. They asked the United States for help,” Young said. At 1702, his team received alert notification, and by 1708 produced a map showing the data and asked that the U.S. Coast Guard be launched. From the last radar hits at 1,300 feet msl, the NRAT team could give the Coast Guard an estimated ditching location. 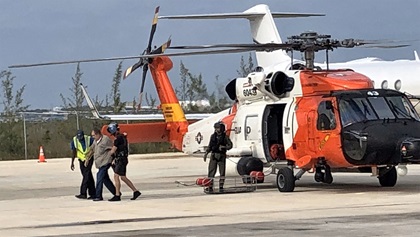 There were reports of a mayday and an ELT signal, Young added. “There was some uncertainty about the location. These things happen fast. We focus on getting our product and our data to the Coast Guard,” which works to enhance that data with ELT or EPIRB information if it’s available.

By 1745Z he had Aireon data showing an altitude of zero msl. “That told me exactly where the crash was.” He relayed that information to the Air Force Rescue Coordination Center, which calculated drift, and said the Coast Guard helicopter flew right to the pilot. “I heard he was difficult to see, and he was exactly where he was expected to be based on crash location and the drift. I’m led to believe it was the Aireon technology that brought them to him.”

Qualified parties can apply through the website, and once vetted and registered, can call an operator and request a search by ADS-B flight ID or by the aircraft’s 24-bit ICAO address, said Sean Patrick, IAA’s general manager of oceanic services. “They’ll get an immediate return of the last position of the aircraft,” including latitude, longitude, altitude, and time, Patrick said. Follow-up includes a graphical representation of the last 15 minutes of flight, with headings and altitudes—and every ADS-B return during the last minute, which are typically updated every five to eight seconds.

This all happens within about two minutes of the initial call, he added. “We also generate a KML file, which people are finding particularly useful.” It can be overlaid on programs like Google Earth. Accuracy is within 100 meters or less, and often can provide data to lower altitudes than terrestrial ADS-B.

In the case of Hinkel’s Cessna 210, Aireon ALERT provided a trace that Patrick said showed a difference of to 2.5 miles between the last radar position and the Aireon position. Patrick later was told the pilot was located 55 meters from the satellite-provided ADS-B position. “We’re really pleased. The whole reason we did this is to save lives. We’re delighted with the outcome.”

Through April 10, Aireon ALERT had received 39 data requests since the service went live in July 2019, all regarding light aircraft in areas with limited radar coverage—many in the United States and Australia.

Determining which position source(s)—ADS-B, ELT, locator beacon, or radar—was used to dispatch the Jayhawk has been difficult to determine.

“The Coast Guard often uses any and all available pieces of information to best determine the location of a person in distress,” explained Cmdr. Erin Boyle, the U.S. Coast Guard’s SARSAT officer. “In this case the Rescue Coordination Center could have received all four pieces of information to best guide SAR forces—in this case, the aircrew/helicopter.” The combination of these resources could have been used to provide the aircrew with a best location of the downed pilot.

Once en route, Coast Guard helicopters can detect and track both 406-MHz and 121.5-MHz signals, leading the aircrew right to the beacon, she said. “This is why we encourage EPRIBs, PLBs, and ELTs, because they work globally and provide SAR forces a location and a means to home into the precise position.”

The Clearwater-based Jayhawk had been deployed to Andros Island for counter-drug assignments, migrant missions, and Bahamian search-and-rescue support, said Lt. j.g. John Martin of the Coast Guard Air Station Clearwater public affairs office. “For the particular case in question, our crew had the radar and the EO/IR [electro-optical/infrared] camera operating but were primarily relying on the direction finder, since finding a person in the water with the radar or EO/IR is extremely difficult at best,” Martin said. “They first picked up the survivor’s 406 MHz beacon emitting from his PLB and used that to track towards him with the direction finder. Once they were closer, they began picking up the continuous 121.5 signal and ultimately used that to locate the pilot.” The direction finder sends bearing information to the RMI needle on the helicopter’s cockpit display.

After the rescue swimmer recovered Hinkel, the crew flew him to Nassau International Airport, where they landed and transferred him to an ambulance, Martin said.

AOPA’s inquiry was the first Hinkel learned that ADS-B might have played a role in his recovery, but AOPA could not learn with certainty which technology was primary in dispatching the Jayhawk on December 23. A request to the Coast Guard’s Seventh District Headquarters resulted in a Freedom of Information Act request that went unacknowledged for more than two months. Even without that answer, however, the lesson is clear—pilots who fly over inhospitable terrain can stack the deck in their favor by equipping with multiple emergency location technologies.

“The big takeaway is that the pilot helped himself immensely by having a PLB on his person when he ditched,” Martin said. “Visually spotting a single person in the ocean is extremely difficult on the best of days, and having that 406/121.5 signal makes it infinitely easier. His life raft had already sunk when they got to him and only a single lobe of his life preserver was functioning. The PLB saved his life for sure.”

Technical Editor
Mike Collins, AOPA technical editor and director of business development, died at age 59 on February 25, 2021. He was an integral part of the AOPA Media team for nearly 30 years, and held many key editorial roles at AOPA Pilot, Flight Training, and AOPA Online. He was a gifted writer, editor, photographer, audio storyteller, and videographer, and was an instrument-rated pilot and drone pilot.
Go to Mike Collins's Profile
Topics: ADS-B, Emergency 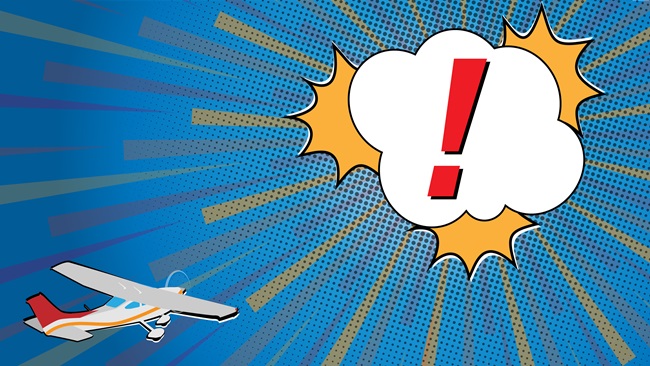