Zoe Dell Lantis Nutter, who died April 22 at age 104, was much more than the pretty face who helped propel aviation to public popularity. She was also a pilot who had a few things to say about how airplanes are built.

Ohio’s Dayton Daily News reported her death under a headline that attempts to summarize Nutter’s remarkable array of roles, “Actress, pilot and philanthropist,” leaving it to the story to quote former First Lady Laura Bush’s synopsis from a 2006 White House presentation of the Ford’s Theater Lincoln Medal: “Few women can claim to be a dancer, a model, a huntress, an aviator, a philanthropist and a pirate … Zoe Dell Lantis Nutter is one of them.”

An Oregon native who went on to live in cities from California to Ohio, Nutter was featured at age 20 in a Life magazine article about the Golden Gate International Exposition held on Treasure Island in San Francisco, the newspaper reported. A 2005 feature in AOPA Pilot noted Nutter’s role in popularizing air travel that began two years later, when then-22-year-old Nutter was cast as a “radiator cap girl” who posed for photos on a Douglas DC–3 to pitch air travel at the World’s Fair in San Francisco. Not content just to pose for pretty pictures, Nutter learned to fly after applying her acting and dancing talent to the USO during World War II, eventually earning her commercial pilot certificate with multiengine and instrument ratings at Chicago Midway International Airport.

“I figured if you could get your instrument rating in Chicago with the weather they have, you could fly anywhere,” Nutter recalled in 2015, according to the Dayton Daily News. 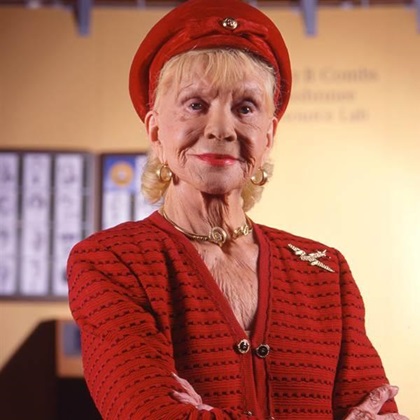 Nutter took a hands-on approach to building the pilot community as well. In California, she helped organize the Monterey Bay Chapter of The Ninety-Nines International Organization of Women Pilots in 1965 and participated in the 1968 Powder Puff Derby; she also helped Piper pitch airplanes in the 1960s.

Following the death of her first husband, Nutter met Ervin Nutter, owner of an aerospace company, during a business trip to Dayton, Ohio, and the couple married in 1965. Nutter went to work at Elano Corp. as the leader of the small aircraft division, where she also served as a company pilot. She encouraged engineers to put more power under the cowling for safer flights over mountains, leading to a manifold redesign, according to her Dayton Walk of Fame biography.

The Nutter family donated millions of dollars to various causes, including $1.5 million to support Wright State University and build the Ervin J. Nutter Center, the Dayton Daily News noted. She also served as the first female president of the National Aviation Hall of Fame, and was inducted in 2008 as a Living Legend of Aviation.

Nutter died peacefully at her longtime home in Beavercreek Township, Ohio, her attorney, Merle Wilberding, told the newspaper. He opined that Nutter would almost certainly have begun her own obituary with aviation:

“If you were to ask her, that’s what she would say,” Wilberding said. “She was a promoter of aviation history forever. In the last 20 or 30 years, she was the biggest proponent of the Aviation Hall of Fame.”

She summarized her life in an interview with the university a year before her death: “I did all the things I wanted to do. You have a certain amount of time you’re going to be here; you might as well do it right."