Get the app Get the app
AOPA Members DO more LEARN more SAVE more - Get MORE out of being a pilot - CLICK HERE
News & Media Record setting test pilot Charles E. 'Chuck' Yeager dies at age 97

On October 14, 1947, Yeager flew the Bell X–1 rocket-powered airplane that he named Glamourous Glennis after his wife to a speed of Mach 1.06 (760 mph) over the Mojave Desert to etch his name in history as the first human to break the sound barrier. NASA wrote in an official biography that Yeager “so impressed his superiors that he was selected to fly the X–1 from over 125 senior pilots.”

The National Aviation Hall of Fame enshrined Yeager in 1973, recalling that during the top-secret supersonic effort he “didn’t look at it as a barrier” but rather “as a mission” and his “duty.” When the aircraft was released from its mother ship at 20,000 feet, it rocketed forward and “began to buffet madly,” the organization noted on Yeager’s biography page. “But Yeager realized that there would be no turning back. As the fury of the plane increased Yeager surmised that neither it nor he could long endure. Yeager, however, concentrated on himself and the willing X–1, a beautiful craft to fly. Suddenly the buffeting ceased, and Yeager realized that the powerful X–1 had crossed the barrier that had so baffled men’s minds for centuries.”

The flight was so secretive that the public wouldn’t learn about it for seven months. Aviation standout, chase plane pilot, and lifelong friend Bob Hoover backed up Yeager on that mission. 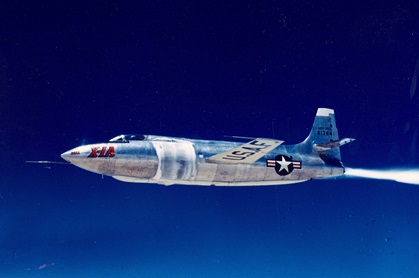 During a subsequent test flight, Yeager “pushed the X–1A to new heights, but almost lost his life as his plane came within feet of crashing,” NASA reported. In 1953 he set another speed record of Mach 2.4 (1,650 mph) during high performance flight envelope testing.

In 1963, Yeager was severely burned after he lost control of a NASA-modified Lockheed NF–104A Starfighter capable of achieving an altitude of 120,800 feet. A historical look at the event released by the Edwards Air Force Base history office showed Yeager struggling with the aircraft as it ascended through 101,595-feet before it “went into an uncontrollable yawing and rolling motion from which Col. Yeager never regained control.” He ejected from the flat-spinning aircraft and was injured during the bailout. The Air Force determined that engine rotation after shutdown for the high altitude zoom phase of flight led to the gyroscopic spin condition and “not necessarily pilot input.”

The tumbling crash at the edge of the Earth’s atmosphere was described in author Tom Wolfe’s book The Right Stuff and later depicted by Hollywood in the 1983 film of the same name with actor Sam Shepard playing Yeager. Additional details are in Yeager’s autobiography. 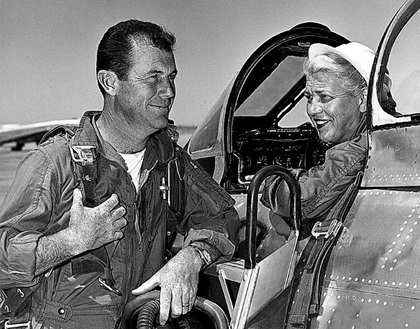 Yeager began to earn his flight chops when he entered the military in 1941 and served stateside as a mechanic and a pilot before seeing combat during World War II, NASA noted on a biography page. He was shot down, wounded, and imprisoned during a mission over German-occupied France but made his way back to England, CNN reported in a tribute. He won the Bronze Star for helping another downed airman escape occupied France, AOPA previously reported.

Yeager’s distinguished military service led to a role at what was then named the Air Force Flight Test Center at Edwards Air Force Base, where he was appointed director of the Aerospace Research Pilot School in 1960. He later served as a wing commander during the Vietnam War and flew more than 120 combat missions before retiring from military service in 1975. Congress recognized his research into breaking the sound barrier with a special Silver Medal for bravery. President Gerald Ford awarded Yeager the Presidential Medal of Freedom.

Yeager was also named chairman emeritus of the Experimental Aircraft Association's Young Eagles Program, which he headed from 1994 to 2004. 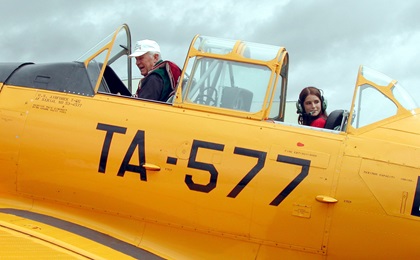 A 1948 flight under the Kanawha River bridge in West Virginia in a Lockheed F–80 Shooting Star was determined to have violated U.S. Air Force and FAA regulations but was so significant that it later led to the bridge being named in Yeager’s honor. Yeager Airport in Charleston, West Virginia, is also named after the state’s aviation son, who was born about 40 miles west in the hills and hollows of Myra.

He overflew his hometown airport during a 1986 aviation record run when the 62-year-old Yeager flew a Piper Cheyenne 400 LS from California to New York with World War II triple ace C.E. “Bud” Anderson in five hours and 23 minutes. Yeager told The Los Angeles Times after the flight that the 2,457-mile journey at an average speed of 480 mph was “a piece of cake.” Yeager tried to describe his love of aviation to the newspaper after setting that cross-country record: “You don’t have feelings when you fly an airplane, you just have a lot of fun. Anything that’s a challenge is fun.”