Get the app Get the app
AOPA will be closing at 3:15pm ET Thursday, December 1st. We will reopen Friday morning at 8:30am ET.
AOPA Members DO more LEARN more SAVE more - Get MORE out of being a pilot - CLICK HERE
News & Media Sounds like a plan

A 770-mile-long racetrack in the sky above Kansas could become the proving ground for innovations that bring supersonic aircraft back into widespread civilian use. 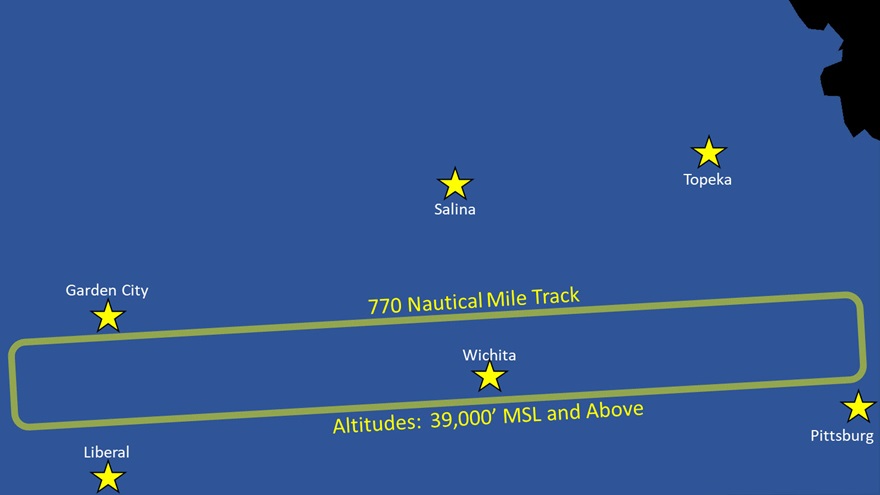 Courtesy of Kansas Office of the Governor.

Supersonic aircraft have been non-grata in skies above populated places since the heady but noisy days of the supersonic Concorde, but the goal of flying civilian aircraft at supersonic speeds was never abandoned.

In an announcement issued on powered aviation’s hallowed December 17 anniversary, Kansas Gov. Laura Kelly and Kansas Transportation Secretary Julie Lorenz announced the completion of an agreement with the FAA to establish the Kansas Supersonic Transportation Corridor, a testing space for non-military aircraft that can fly faster than the speed of sound.

“To be able to deliver this new opportunity for our country is yet another example of Kansas cementing its reputation as a national leader in the aviation industry,” Kelly said in a news release. “This high-altitude flight corridor gives Kansas a strategic advantage in attracting companies involved in the development of supersonic aircraft, and will play a significant role in our state’s ability to encourage economic development as we recover from the COVID-19 pandemic.”

State researchers and the National Institute of Aviation Research of Wichita State University will collect and evaluate noise data and telemetry from test aircraft, with the partnership bringing “a sophisticated and cost-effective flight test capability within reach of every major aircraft manufacturer in the country,” according to WSU Senior Vice President for Industry and Defense Programs and NIAR Executive Director John Tomblin.

An illustration that accompanied Kelly’s news release depicts the corridor as an elongated racetrack running the length of Kansas from Pittsburg in the east to Liberal and Garden City in the west, with Wichita—long a national hub of aviation development and manufacturing—positioned roughly at its center. The corridor would operate at 39,000 feet msl and above.

Two federal rulemaking initiatives being pursued by the FAA are also intended “to advance the development of civil supersonic aircraft,” the agency noted in a fact sheet issued on November 25, adding that the Concorde “was retired nearly two decades ago because of the high cost of meeting the environmental restrictions on sonic booms, inefficient fuel consumption, and other factors” that limited its utility.

“Companies in the United States and abroad are now taking a new look at supersonic air travel. Lighter and more efficient composite materials, combined with new engine and airframe designs, may offer the potential for introduction of a viable SST,” it said.

The test route was assessed by the Kansas City Air Route Traffic Control Center “to protect the safety and efficiency of the National Airspace system,” the state’s announcement noted.

The announcement included supportive statements from NASA Administrator Jim Bridenstine, who noted that “NASA is working with industry to build supersonic aircraft with ‘low-boom’ or ‘no boom’ flight characteristics, and Sen. Jerry Moran (R-Kan.) who cited forecasts showing “a market for as many as 300 sophisticated supersonic aircraft over a 10-year period, representing as much as $40 billion in revenue and requiring a ‘deep bench of skilled manufacturing talent.’”

Dan Namowitz has been writing for AOPA in a variety of capacities since 1991. He has been a flight instructor since 1990 and is a 35-year AOPA member.
Go to Dan Namowitz's Profile
Topics: Technology, COVID19, Aircraft