Get the app Get the app
We will be performing maintenance on our systems Sunday, 8/21, beginning at 12:00 A.M. ET and ending at 6:00 A.M. ET. During this time, you may experience intermittent service outages. We appreciate your patience.
News & Media Changes coming to Washington DC area VFR operations

Editor's note: This story was updated on January 14 to include new notam 0/3929 that addresses procedures in the Leesburg Maneuvering Area.

Pilots who conduct VFR flights in the Washington, D.C., area should familiarize themselves with new notices to airmen that take effect at 0001Z on January 15, including revisions to operating procedures to three airports within the Washington, D.C., Special Flight Rules Area’s Flight Restricted Zone, and in the Leesburg Maneuvering Area at Leesburg Executive Airport in Virginia. 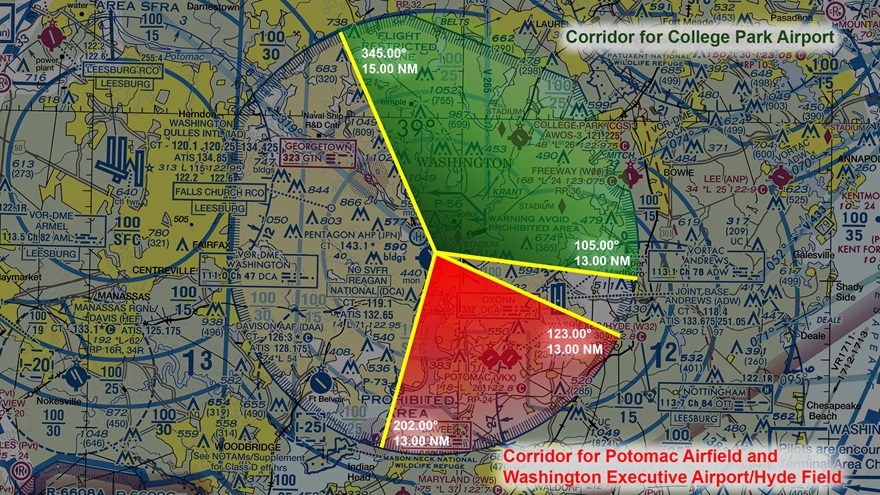 AOPA urges pilots of manned and unmanned aircraft to review the notices to airmen carefully before operating in the areas described.

The changes will be reflected in an update of the online course pilots must take before flying VFR within 60 nautical miles of the Washington (DCA) VOR/DME, but the course update will not occur before the airspace changes take effect. Successful completion of the course fulfills the regulatory requirement for special awareness training for the SFRA, but there is no requirement to take the course again if you have already completed it.

Updated procedures for the airports in the FRZ are contained in notam 0/0053 and complementary notams that will replace existing notam 8/3032. The update removes a federal law enforcement waiver requirement and adds language requiring that VFR operations to or from College Park Airport, Potomac Airfield, and Washington Executive Airport/Hyde Field, all in Maryland, take place in designated corridors defined by radials from the Washington (DCA) VOR/DME. The use of the corridors to and from the “Maryland Three” airports avoids having the flights cross the FRZ.

Revisions to procedures at Leesburg Executive Airport are addressed in notam 0/3929, which adds language authorizing the remotely operated Leesburg Tower to assign transponder code 1234 to aircraft flying in the airport traffic pattern when the tower is in operation. Pilots flying to and from Leesburg are reminded to squawk transponder code 1226 when departing the Leesburg Maneuvering Area and entering the SFRA.

Notam 9/1811, which contains supplementary special security instructions for unmanned aircraft flights, will replace notam 6/1117. The new notam adds language pertaining to commercial unmanned aircraft operations, and adds language authorizing certain commercial or public-use UAS flights in the FRZ if an airspace waiver has been granted. A requirement of the prior notam for a UAS operator to notify air traffic control or an airport operator if the flight operation is within 5 miles of the facility has been removed.

DCA VOR/DME to remain in operation

Because of the DCA VOR/DME’s importance to national security by virtue of its role in facilitating SFRA navigation, the FAA is retaining the navaid indefinitely. The agency agreed to do so, at AOPA’s urging, reversing its plan to shut down the DCA VOR/DME as one of the navaids to be discontinued as part of the NextGen airspace modernization program’s VOR Minimum Operational Network effort.

Dan Namowitz has been writing for AOPA in a variety of capacities since 1991. He has been a flight instructor since 1990 and is a 35-year AOPA member.
Go to Dan Namowitz's Profile
Topics: Advocacy, Airspace Redesign, Airspace