Like almost every other event in aviation since spring, Episode I of the 2020 FAA UAS Symposium was held virtually July 8 and 9, with 1,223 people logging in for presentations and discussions streamed online. 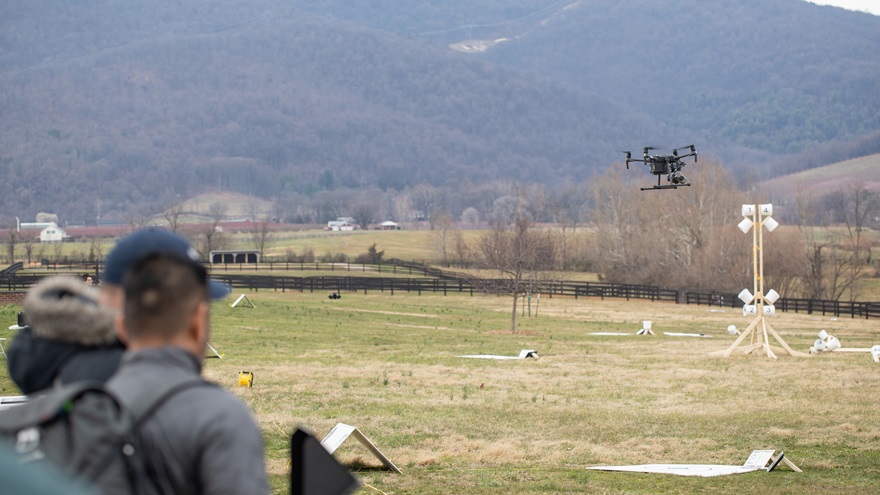 FAA officials announced during the agency's 2020 UAS Symposium in July that a version of the FAA Wings Pilot Proficiency Program is being created to allow remote pilots to maintain currency without having to pay for a written test every two years. (This photo was taken in March, at one of the last in-person events of 2020.) Photo by Jim Moore.

FAA officials reiterated that the agency was making progress on the Remote Identification of Unmanned Aircraft Systems notice of proposed rulemaking, which would require that virtually all unmanned aircraft can be identified and tracked; it’s on schedule for release by the end of this year. And plans were announced to adapt initiatives that have increased safety and knowledge in the manned aviation community for use by remote pilots and the broader UAS industry.

The symposium, presented in conjunction with the Association for Unmanned Vehicle Systems International (AUVSI), concludes with Episode II on August 18 and 19.

“We are at a critical juncture in the integration of UAS into the airspace,” said Brian Wynne, AUVSI president and CEO. “We are fast approaching the fourth anniversary of Part 107, and operators around the country are flocking” to the technology. Some 4,000 Part 107 operators in all 50 states hold Part 107 waivers, 92 percent of which are for nighttime operations, he said. “Establishing remote ID standards will increase the safety and security of the airspace, and pave the way for extended UAS operations and automated [air traffic management]—a major step toward expanding operations.”

The FAA received more than 53,000 comments on the remote ID NPRM, said Jay Merkle, executive director of the FAA’s UAS Integration Office. “Rulemaking is progressing,” he added, with final rules for both remote ID and what has been a slow-moving rule from 2016 to allow drone operations over people on track for publication by the end of the year.

Merkle said an implementation team is working on expanded operations beyond FAR Part 107. “The keystone to all of this is safety risk management.” Drones “are here to stay, and they’re doing so much good for society.”

Remote ID is the key to UAS traffic management (UTM), FAA Administrator Steve Dickson told the online audience. “If we don’t do this safely, we aren’t going to be able to do what we all want.”

LAANC, the Low Altitude Authorization and Notification Capability, has been successful so far—with more than 320,000 requests through the end of May—and will serve as a key building block to UTM, said Teri Bristol, chief operating officer of the FAA’s Air Traffic Organization. “Our processing time for these requests has been reduced from days to seconds,” she said, adding that it has been expanded to recreational flyers. Reducing grid sizes of LAANC airspace maps will increase flexibility.

“Remote identification is a necessary ingredient to enable more complex operations,” Bristol added, because it helps address safety, security, and law enforcement concerns. “We have some work to do but we hope to publish a final rule in December.”

“AOPA appreciates the FAA’s continued recognition and support of the need for safe integration, and that segregated operations is not the solution,” said Chris Cooper, AOPA director of regulatory affairs.

A program similar to the FAA Wings Pilot Proficiency Program for pilots of manned aircraft is being developed for Part 107 pilots, announced Kevin Morris, an FAA aviation safety inspector. Participation will allow pilots to maintain currency without spending $150 at a testing center every two years, he said. Morris also encouraged Part 107 operators to volunteer for the FAA Safety Team’s DronePro Program, which promotes safe UAS operations.

The UAS Safety Team (UAST) is partnering with the FAA and NASA, emulating the existing Aviation Safety Reporting System to facilitate sharing of safety information, to promote trust, and to foster a safety reporting culture within the UAS community, Sean Cassidy, director of safety and regulatory affairs for Prime Air, Amazon’s drone delivery system, said in a session on the UAST.

“AOPA supports and appreciates the FAA’s effort in promoting safety culture best practices to the entire UAS industry through the Drone Advisory Committee [DAC], UAST, and FAAST Team,” said Cooper, who represents AOPA both in the UAST and the DAC’s Safety Culture for Drone Operators tasking group. That group seeks to help the drone community adopt the strong safety culture prevalent in manned aviation. Manned aviation’s safety culture is a pillar of general aviation’s strong safety record today, he noted. “A strong drone safety culture will significantly assist the safe and efficient integration of drones into the NAS.”

Because most Part 107 waivers were issued for 48-month periods, the oldest are coming due for renewal, said Jeremy Grogan, the FAA’s Part 107 waiver team lead. Although the DAC recommended autorenewals for waivers, “unfortunately, the FAA is unable to autorenew waivers,” he said. Because rules expected to be issued in December 2020 could make some waivers unnecessary, new waivers for FAR 107.29 and FAR 107.39—daylight operations and operations over people—will be issued as amendments to existing waivers valid until the new rules take effect.

The FAA will host its second drone safety awareness week in November to help educate the public about proper operation.

Technical Editor
Mike Collins, AOPA technical editor and director of business development, died at age 59 on February 25, 2021. He was an integral part of the AOPA Media team for nearly 30 years, and held many key editorial roles at AOPA Pilot, Flight Training, and AOPA Online. He was a gifted writer, editor, photographer, audio storyteller, and videographer, and was an instrument-rated pilot and drone pilot.
Go to Mike Collins's Profile
Topics: Advocacy, Events, Drone