Get the app Get the app
Get the latest news on coronavirus impacts on general aviation, including what AOPA is doing to protect GA, event cancellations, advice for pilots to protect themselves, and more. Read More
Already a member? Please login below for an enhanced experience. Not a member? Join today
News & Videos More than words: Aviation industry professionals discuss racial injustice

The Organization of Black Aerospace Professionals (OBAP) brought a diverse group of aerospace leaders together for an online town hall discussion about race in America—more specifically, to work together and create short- and long-term solutions to eliminate racial injustice within the aerospace industry. 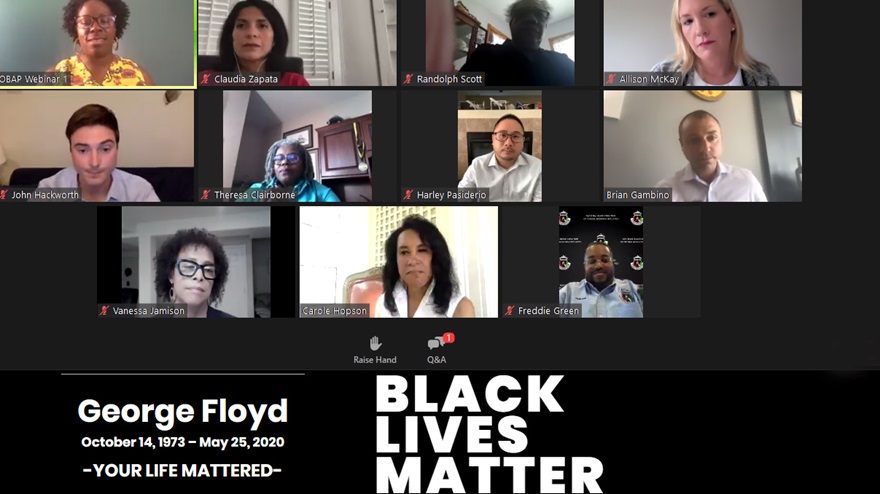 The Organization of Black Aerospace Professionals hosted a conversation June 11 on Zoom about how to address racism, and promote diversity and inclusion in the aerospace industry.

Leaders from nine groups said they felt compelled to join forces following the death of George Floyd and other high-profile violent events targeting black Americans that have illustrated the complex constellation of issues facing our nation. The series, Courageous Conversations, is an attempt to address these issues head-on.

OBAP exists to Inspire “Excellence and provides opportunities in aerospace by Supporting, Transforming, Educating, and Mentoring our members and communities,” and its vision is to change “lives by creating a pathway to success through educating youth, communities, and professionals—shaping an aerospace industry as diverse as the people we serve.”

The town hall was moderated by United Airlines first officer Carole Hopson, whose prior experience includes working for the National Football League, Foot Locker, and L’Oréal. She is also a former flight instructor, and is writing a historical fiction novel, Fighter Pilot. She also founded the 100 Wings Project, which aims to enroll 100 black women in flight schools.

The discussion was kicked off with a video of an ad for P&G called “The Look,” which shows life from the eyes of a black man who experiences unwelcoming and hostile looks from others throughout his experiences in life. The video continues from the perspective of that man walking into a courtroom and ends as he takes his seat as the judge.

After the moving video, each panelist shared some of their background and experiences within the aviation and aerospace industry, along with their thoughts on the current issues facing this country concerning racial injustice and systemic racism.

Retired U.S. Air Force Brig. Gen. Randolph Scott, who advised the Department of Defense on issues of racism and the diversity of military leadership, spoke about his personal experience. Scott, who is a vice president of the Tuskegee Airmen Inc., said he believes that “the issue of being silent in relation to race and the perpetuation of racism is that we allow too many things to go on because we aren’t feeling the pain of it.” He continued, “a lot of the issues we are dealing with have underlying problems,” and have a lot to do with “lack of training and lack of holding people accountable.” Scott believes part of the solution begins with holding people accountable, from CEOs to politicians.

Sisters of the Skies president, United Airlines captain, and retired Air Force KC–135 instructor pilot Theresa Claiborne was the first African American woman pilot in the U.S. Air Force. She shared her extensive experience with discrimination throughout her career and offered these words of advice: “What each of us has to do is be the best pilot we can be. Until we do that, we are always going to have people look at us and think we got that seat because of affirmative action.” Claiborne shared that she was heavily recruited by the airlines and believes she wouldn’t be where she is today “if I didn’t perform.”

After sharing a story about a co-pilot who inferred that she attained her position through affirmative action and believed that resulted in someone else not being hired, Claiborne explained that she always believes in having a conversation with such people. If someone doesn’t understand, be respectful, and open to having a conversation. She went on to say, “I hope I taught him something and hopefully he would pass that on.”

Claudia Zapata-Cardone, also a United Airlines captain and a member of the Latino Pilots Association, was asked what advice she had for others on how to bring these complicated and hard conversations into the workplace. Zapata-Cardone shared a harsh reality many people experience: “I’ve been guilty of being silent myself because I didn’t want to be ostracized or be labeled as the troublemaker.” She went on to admit that she would just “smile” and take what was said about her because she wanted to “get along with everyone and not be seen as someone who wants to cause problems.” She went on to say, “I’m guilty of being silent and I won’t be silent anymore.”

JetBlue Airways first officer and National Gay Pilots Association President Brian Gambino shared another harsh reality he said he believed is partially responsible for the continued unfavorable behaviors. “A problem that is deeply engrained in companies is that there are no real penalties for acting inappropriately,” he said. “Unfortunately, there’s a great tolerance for looking the other way and not intervening. We need to work towards acceptance and equality and a different type of tolerance.”

Many speakers on the panel acknowledged the lack of diversity throughout the aerospace industry and agreed on one common theme—acting and evoking change. Whether that means ensuring that CEOs and senior leaders from well-known organizations back up their words and public sentiments in support of abolishing systemic racism with visible and actionable change, and speaking up and no longer being silent when personally experiencing or witnessing racism firsthand.

The conversation closed on the issue of companies, organizations, and individuals sharing their support publicly for the Black Lives Matter movement. “Sometimes jumping on the bandwagon is not a terrible thing for the overall movement I suppose,” said Gambino. “It can be a good thing because if it starts a conversation that wouldn’t have been had before, if that one post that someone makes is seen by an aunt, an uncle, a friend that had no idea about the movement, it can do some good things. And I’ve actually gotten to witness it myself.”

The next session in the Courageous Conversations series is scheduled for June 16.