Get the app Get the app
Get the latest news on coronavirus impacts on general aviation, including what AOPA is doing to protect GA, event cancellations, advice for pilots to protect themselves, and more. Read More
Already a member? Please login below for an enhanced experience. Not a member? Join today
News & Media Georgia aviators at heart of coronavirus rescues 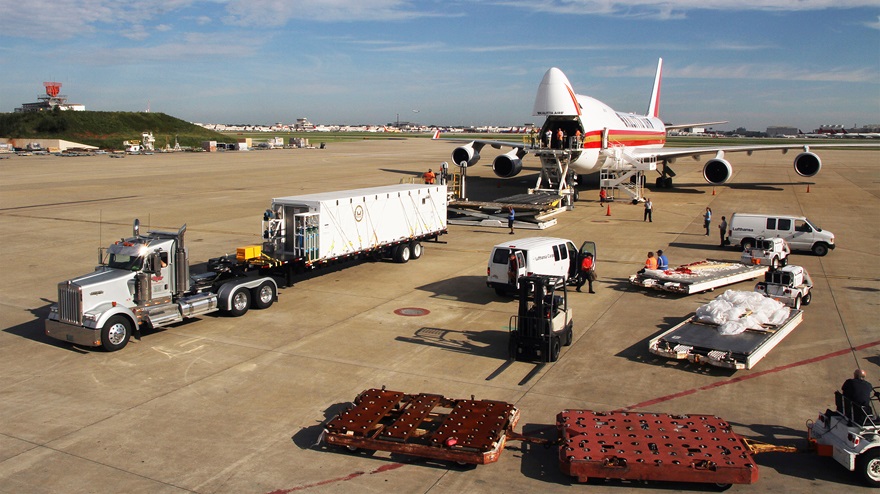 A containerized biocontainment system developed by Phoenix Air, center, is maneuvered into a Kalitta Air Boeing 747-400 cargo aircraft at Hartsfield-Jackson International Airport in Atlanta surrounded by additional hardware during preparation for a containment mission. Photo courtesy of Phoenix Air.

Wuhan is “as big—or bigger than—New York City,” said Thompson. “It’s a giant industrial city and there are a lot of American factories set up there to make everything imaginable and they have a lot of American managers overseeing work. The U.S. government made a decision, from the President on down, to get Americans out.”

In mid-February, Boeing jetliners equipped with a Containerized Biocontainment System (CBCS) that Phoenix Air developed dashed to the scene as the confounding disease developed into a household word.

With the help of several U.S. federal agencies, medical professionals, and infectious disease experts, the company organized five Boeing 747 flights to airlift Americans and their families from the epicenter. “We ended up bringing out over 1,100 Americans and 100 Canadians” who were working in the region. 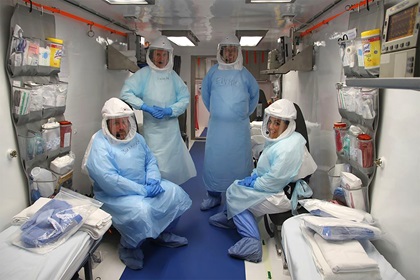 The evacuees were taken to March Air Reserve Base in California. Those who showed symptoms were isolated inside the aircraft during the flight and quarantined upon arrival. Thompson said the medical staff closely monitored the passengers prior to and during the flights.

“A week later there were hundreds of Americans caught on the Diamond Princess in Japan. Being stuck on a ship with 4,000 people is a lot harder to contain than if you were just in your apartment in a city,” he said.

The decision was again made to “bring out as many well people as possible.” The company sent two specially outfitted Kalitta Air 747s into Japan. “Fourteen showed indications of having the coronavirus, so the decision was made to isolate them from other passengers” on the aircraft, and they were then transferred to U.S. hospitals.

A 40-foot-long, 8-foot-wide, and 8-foot-tall room that weighs 25,000 pounds slides inside the nose of a transport jet and can accommodate four patients in isolation and six medical attendants. “Think of a CBCS as a self-contained system the size of a tractor trailer container,” explained Dent Thompson. “The only thing it will fit inside on the commercial side of aviation is a Boeing 747-400,” with 12 inches to spare between the containment device and the fuselage, which is loaded in from the aircraft’s hinged nose. On the military side, Boeing’s C–17 Globemaster and Lockheed Martin’s C–5 Galaxy also accommodate large packages with swinging noses. 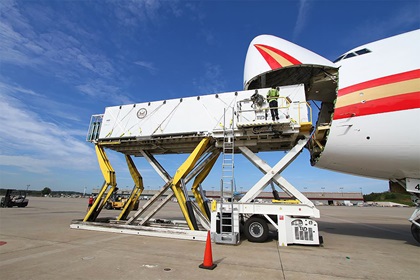 The white containers are trucked from Cartersville 40 miles south to Hartsfield-Jackson International Airport in Atlanta and maneuvered into a Kalitta Air Boeing 747-400 cargo aircraft operated under contract from Phoenix Air. Additional hardware and medical personnel are moved into place before deployment.

“This type of work is not something you put on a shelf and pull it out when there is a pandemic,” Thompson confided. Personnel drill on a regular basis for such emergencies. “These are very large-scale public exercises. We have to practice with our partners at the CDC, the U.S. Department of Health and Human Services,” and other government and safety entities. “We’ve been in a dress rehearsal for the coronavirus since 2017.”

Although he wasn’t authorized to release certain details, Thompson said the cargo containers “are the most sophisticated biocontainment system in the world.” All four devices are owned by the U.S. Department of State and operated under contract by Phoenix Air.

The containment equipment and procedures were originally developed at a smaller scale to transport Center for Disease Control and Prevention and U.S. Health and Human Services infectious disease experts to hot spots throughout the world via business jets—in case a researcher became symptomatic in the field. 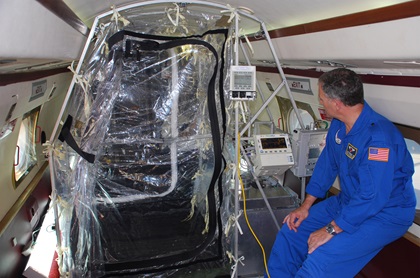 Phoenix Air’s expertise was put in play during the Ebola epidemic because of the research the company put into pioneering the challenging transportation requirements. Thompson said the team quickly became decontamination experts—in addition to its aviation capability. Each jet is thoroughly cleansed after missions.

Thompson said the sterile biocontainment tent used for Ebola patients is called an Aeromedical Biological Containment System (ABCS), and it was adapted to fit inside a highly modified Gulfstream III business jet. The ABCS occupies about 50 percent of the jet’s interior space, and it was approved by the FAA under a supplemental type certificate—a process familiar to general aviation aircraft owners.

“This is the system we became well-known for in 2014 when Ebola broke out in West Africa. From August 2014 to March 2015 we did over 40 transports between West Africa, Europe, and the United States,” said Thompson. “The Achilles heel is that it was one patient inside one airplane.” The company operates four modified aircraft, “so the very best that we could do is move four patients in four separate aircraft” when the need arose. The Ebola airlift led to ideas about how to scale up the operation.

“We practice all the time,” said Thompson. “We are in standby and should this continue [into the future] we and the U.S. government are prepared to do whatever is necessary to protect American lives.” 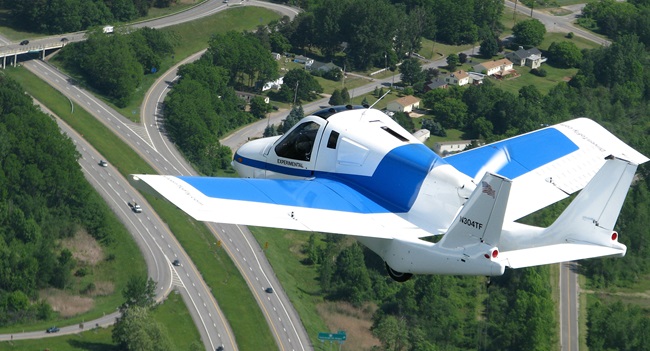