Get the app Get the app
Get the latest news on coronavirus impacts on general aviation, including what AOPA is doing to protect GA, event cancellations, advice for pilots to protect themselves, and more. Read More
Already a member? Please login below for an enhanced experience. Not a member? Join today
News & Videos Joining forces for organ transplant

Companies from Connecticut and Ohio have teamed up to transport human organs for transplant, using unmanned aircraft as links in the lifesaving logistics chain. 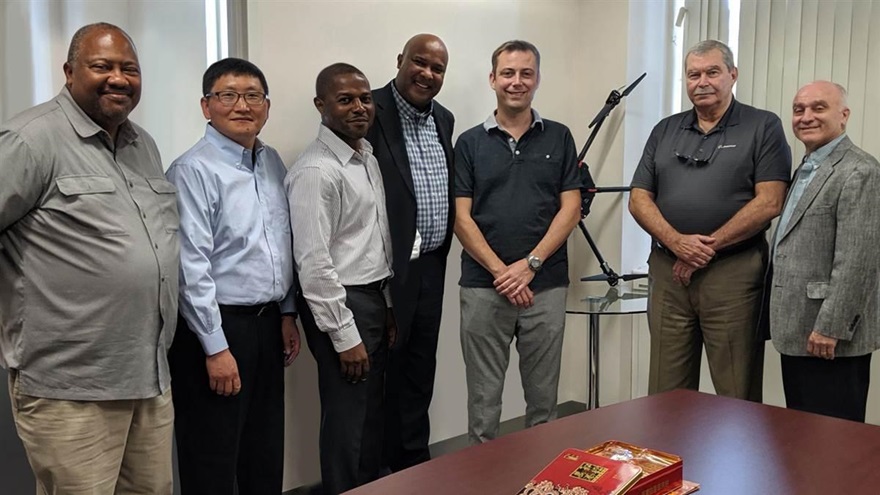 Aquiline Drones, based in Hartford, Connecticut, plans to integrate unmanned aircraft into one of the world’s most specialized, least-innovated, and time-critical supply chains, hoping to dramatically shorten the time required to deliver a human organ for transplant. The plucky startup company recently acquired an FAR Part 135 Air Carrier Certificate, joining Amazon, UPS, and Google as companies with drone delivery aspirations.

Partnering with Dayton, Ohio-based VyrtX, which specializes in on-demand medical delivery, Aquiline’s goal is to significantly reduce the time required to transport organs. Speeding up that highly specialized supply chain can save lives, and Aquiline and VyrtX have undertaken a huge challenge to create and prove a more centralized resource for organ delivery logistics.

A human heart or kidney transport, much like the delivery of most consumer products, can involve three stages: the first mile (a figurative term since it could be up to 100 miles), the middle leg (500 miles or more), and the last mile. The concept of operations Aquiline Drones co-founder and CEO Barry Alexander has in mind would insert customized, gas-powered, vertical takeoff and landing unmanned aircraft systems capable of carrying 100 pounds and flying 200 miles into the first and last legs of the journey. The middle leg would be handled, as it often is today, by conventional general aviation aircraft such as a Citation CJ3 or Cessna Caravan specifically configured for these missions.

According to Alexander, the current process does not begin until the organ viability clock is already ticking. 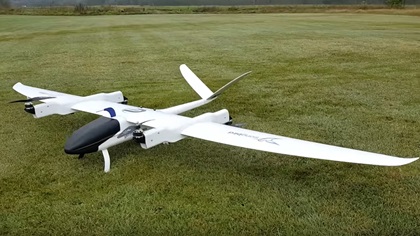 “Believe it or not, that’s where a person picks up a phone and starts making calls to ground carriers, air charter and air ambulance companies,” said Alexander. Lining up the various legs of the delivery can take up to two hours, and Alexander is not alone in declaring this dangerously inefficient. He cites a national statistic of 20 lives a day being lost while waiting for transplants.

“Every minute or hour that is lost or gained from a more efficient system can be quantified as being able to add x number years to someone’s life. Minutes do matter.” Alexander said.

Aquiline is not the first to think of this. A University of Maryland team tested the viability of transporting organs by drone in 2018, then claimed the “first” live organ transplant in April 2019.

Those efforts focused on proving the concept was possible, and the actual “live” flight was basically a one-off, a 2.6-mile, 10-minute trip between two Baltimore hospitals.

Aquiline looks to take this several steps further, creating a cloud application to share real-time data, including every organ’s location, temperature, and viability status (how much time is left before the tissues degrade to the point the organ is no longer viable). All stakeholders would have access to the data in Aquiline’s customized cloud service.

For those of you who hear “cloud” and think “weather,” the cloud in this case is a network of connected computers accessible over the internet. (Amazon Web Services feeds megawatts of electricity to the servers that comprise its cloud.)

Cloud computing is at the heart of Aquiline’ s endeavor, Alexander said. The Aquiline cloud will be specifically tailored for aviation and able to manage a complete drone ecosystem. It would handle all aspects of logistics, including mission planning, navigation, geofencing, notifications, and updates, and would also host VyrtX’s own software.

By now, it’s evident we’re not describing the ubiquitous DJI quadcopters at work. Alexander refers to them as “toys.” The systems he seeks need to be all-weather, long-range aircraft. Alexander stresses the terms “aircraft," "standardization," "reliability," and "safety" frequently as he describes his company’s approach. (These are buzzwords in FAA and UAS industry circles these days, as even a casual viewer of the recent FAA Drone Advisory Committee meeting will notice.) 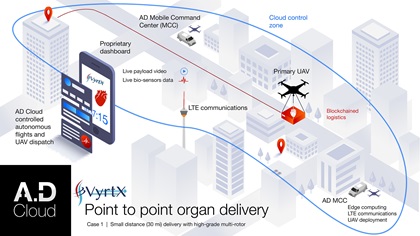 In the interest of safety and collision avoidance, Aquiline plans to pitch to the FAA a safety system that creates detect-and-avoid capability with ground-based radar surveillance fed to a network of mobile command centers. Vehicles packed with communications equipment would receive live ATC radar feeds and monitor the transport drones as they intelligently detect and avoid other aircraft. In the envisioned delivery system, air traffic controllers using the present-day system would “see” medical drones on their radar scopes, just as they do other aircraft, and know that they are flying medical missions along dedicated corridors.

Aquiline hopes to use ADS-B Out to make its unmanned aircraft easily visible to ATC and other aircraft, but would also equip each unmanned aircraft with its own "intelligent" detect-and-avoid system. (That may present a few challenges, because the FAA has ruled out ADS-B Out for smaller drones under its proposed scheme for remote identification and tracking, though highly specialized missions that operate in small numbers might be allowed to broadcast ADS-B signals.)

Another unique aspect of the Aquiline Drones/VyrtX conops is that they would always have at least one drone in the air. Each mission request would prompt the system to guide the nearest available drone to a hospital or other facility with drone deployment infrastructure. While the system would be largely automated, a drone pilot would always be standing by in a mobile command center to respond to air traffic conflicts and any other matters requiring human intervention.

Much has to happen in order for a proof of concept to be ready in 14 months. For starters, production drones must be modified for the tasks at hand. That work is in progress, and in the interim, smaller, tilt-rotor drones are being used for testing. Aquiline’s Part 135 certificate also requires modification to include unmanned aircraft, and beyond-visual-line-of-sight permissions must also be obtained. The Part 135 certification, inherited with the recent purchase of a small established Part 135 operation, will allow Aquiline to staff the manned portion of the organ transport logistics chain, and this certification is the first step required by the FAA for drones to carry the property for compensation.

FAA officials recently reported that more than 40 operators are currently seeking the various approvals required for drone operations to commence under Part 135 rules that also govern more traditional air charter and unscheduled passenger service. Also on the rather long to-do list, the mobile command centers must be made operational and approved. Dedicated air corridors need to be created. 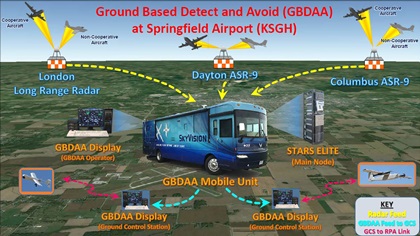 Alexander has been in the business long enough to know that regulatory hurdles may be as great as any technology punch list. He adds that much of the needed technology already exists. The mobile command center concept, for instance, has already been demonstrated. The Air Force Research Laboratory developed and demonstrated the technology of melding multiple ATC feeds with its SkyVision system, and continues to use the technology to advance other research. SkyVision overlays the position of participating drones with what an air traffic controller sees to offer situational awareness.

Part of what full success looks like for Alexander is the FAA adopting a standard for unmanned aerial vehicle navigation, including detect-and-avoid technology. This technology then needs to be fully integrated with the existing ATC system, though the FAA and its counterparts around the world envision a dedicated unmanned aircraft traffic management system, or UTM. In Alexander’s estimation, the United States is about eight years behind other parts of the world in developing a working UTM system. Aquiline engineers have written their own UAV operating system that Alexander says offers superior navigation. He would like to see it become an industry standard based on its enhanced capabilities.

If all of this sounds a bit pie-in-the-sky, Alexander already has some considerable momentum and background for the endeavor. As a younger aviator originally from St. Lucia, he founded Aquiline Air Ambulance service in the early 1990s to ferry medical personnel and patients between Caribbean islands. In some ways, after a career culminating in piloting Boeing 747s around the globe, Alexander is coming full circle to take on another medical mission.

During those globetrotting days working for Atlas Air, Alexander had sufficient downtime to study every drone factory or facility he could. “I spent a solid three and half years vetting the drone industry on a global scale, visiting factories in Japan, China, all over the world,” Alexander said. His aspirations for what can be done with autonomous flight are informed by his research, experience, and observation of results in other countries.

The Aquiline team has some serious expertise beyond its CEO. The company’s roster includes business professionals, fellow airline pilots, aerospace and software engineers, military personnel with UAV management experience, mathematicians, and other technologists. Between them, they know a thing or two about large-scale UAV construction, algorithms, and all-weather operations.

Aquiline’s funding comes in part from crowdsourcing airline pilots rather than the traditional investment firms. According to Alexander, pilots “understand the investment opportunity better than anyone else.”

Alexander cites good cooperation and a positive reception from the FAA and the local Flight Standards District Office. He hopes for a high level of governmental appreciation and accommodation based on the lifesaving potential of the project. “We’re not talking about delivering dog food to your house. This is about enhancing humanity by saving lives.” 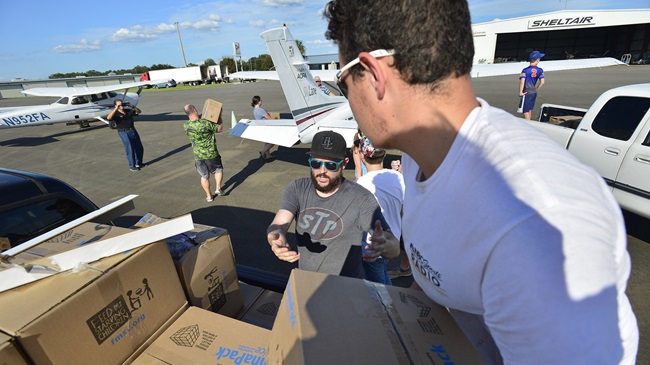 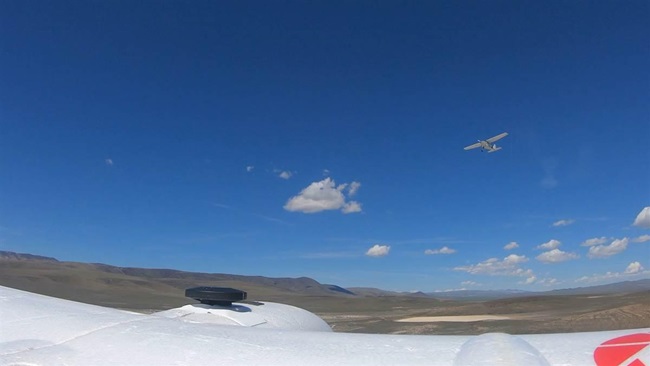