Get the app Get the app
Already a member? Please login below for an enhanced experience. Not a member? Join today
News & Media Military, GA flyovers continue to honor COVID-19 workers

Salutes from Maryland to California recognize those battling coronavirus

Editor's note: This article was updated May 20 to clarify the aircraft manufacturer.

From the East Coast to the West Coast, military and general aviation pilots continued to recognize and honor COVID-19 frontline workers during formation flyovers.

A three-ship formation flight of Fairchild Republic A–10C  Thunderbolt II close air support jets from the 175th Operations Group of the Maryland Air National Guard circled Frederick, Maryland, hospitals, outreach centers, and law enforcement facilities May 8 during a flight that continued south to Waldorf, east to Salisbury, and north through Annapolis and Baltimore.

The round-the-state flyover was part of the U.S. Air Force’s Operation: American Resolve and are being conducted in conjunction with regularly scheduled pilot proficiency flights. The pilots combined their aeronautical salutes with practice exercises through R-4006, a Chesapeake Bay restricted area near the Patuxent River, and they executed dry surface attack missions to simulate a combat environment—although no ordnance was involved.

“This is our way of saying ‘thank you’ to the frontline heroes taking care of us and to all of those in essential industries keeping our state moving forward,” said Kanning. “We want to honor how much they mean to the great state of Maryland.” 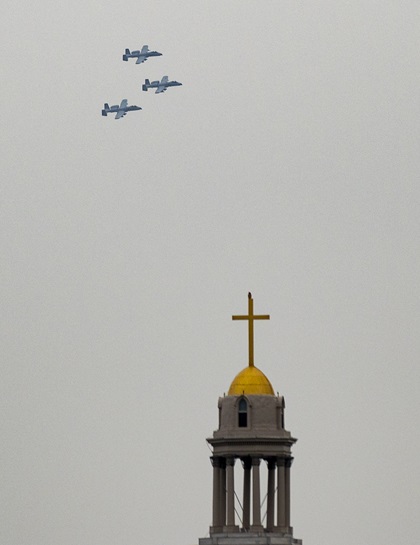 In the GA sector, Steuart Walton, who is chairman of the Arkansas Economic Recovery Task Force and an avid pilot, led a 15-city statewide flyover May 9 that included three North American P–51 Mustangs and a Goodyear F2G Super Corsair thundering overhead. “Every person in every corner of this state matters and we are united in our common resiliency, our grit, our determination and our faith in one another,” Walton told KFSM-TV. Walton’s grandfather Sam founded the Walmart discount store chain.

Aerobatic pilot Vicki Benzing, who represents Bakersfield’s California Aeronautical University during airshows, said she was “excited” to recently perform a flyover in her red 1940 Boeing Stearman biplane thanking “all the first responders and all the essential workers.” Many waved and cheered from parking decks as Benzing and four North American T–6 pilots turned on their airshow smoke for the flybys.

Additional shows of support will include flights over Western New York in a Douglas C–47 Skytrain known as Whiskey-7 on May 16 organized by the National Warplane Museum in Geneseo. The flight path for the aircraft that participated in the second wave of the World War II D-Day invasion includes key hospitals, veteran affairs locations, city centers, parks, and other notable venues.

A circuitous Delaware flight in Panchito, a North American B–25 bomber piloted by Larry Kelley of the Delaware Aviation Museum Foundation, is scheduled for May 23. “It took about 2 seconds” for Kelly to commit the museum’s resources to the flight, said MGMD radio’s Walt Palmer, who is also a pilot. The flight path to honor health care workers will include Bayhealth Hospital, Beebe Healthcare, and Nanticoke Health centers; and other locations in Delaware, he said. 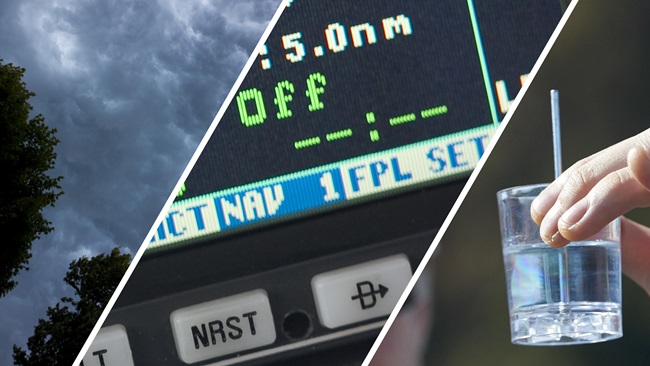 Training Tip: A rain, a plane, a TFR violated