Maiden test flight to livestream May 28

The electric aviation revolution will be livestreamed: A Cessna Grand Caravan is lined up to fly on battery power alone on May 28. Electric propulsion developer magniX, the company that built the 750-horsepower motor, plans to let the world watch its first flight online. 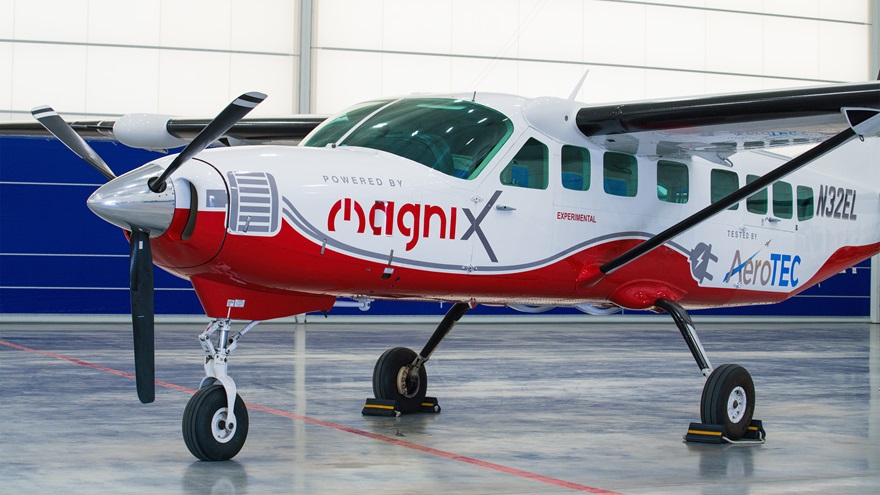 A Cessna 208B Grand Caravan fitted with a 750-horsepower electric motor and batteries is scheduled to make a maiden flight May 28, and electric powerplant maker magniX invites the world to watch the livestream. Photo courtesy of magniX.

The Cessna 208B in question is scheduled to depart Moses Lake, Washington, propelled on its maiden voyage by a magni500 powerplant retrofit facilitated in a collaboration with AeroTec, magniX reported in a news release including a link to the webpage where the upcoming livestream can be accessed.

The Grand Caravan is to be the largest, but not the first commercial aircraft magniX has converted to fly with 100 percent electric power. Roei Ganzarski, CEO of magniX, wrote in an email exchange that the de Havilland DHC–2 Beaver first flown in December continues its test flight program in Canada. Harbour Air, a short-haul air carrier with a fleet of seaplanes, is working with magniX to convert its fleet to all-electric power, and the same 750-hp electric motor that will power the upcoming Grand Caravan flight has been performing well in test flights over British Columbia.

“We are very pleased with the results to date,” Ganzarski wrote.

In a May 14 news release, Ganzarski said the ongoing coronavirus pandemic prompted magniX to adjust its plan for the first flight: “Out of safety and concern for everyone’s health and well-being, we will not be hosting people at the actual flight location…however, we wanted to make sure you are able to enjoy the historic flight.”

While the company clearly doesn’t mind making a splash, literally or otherwise, another magniX powerplant project remains shrouded in a bit more secrecy. Israeli electric aircraft venture Eviation Aircraft announced in 2019 that it was working with magniX on a nine-seat regional commuter aircraft dubbed Alice. The certification timeline is similar to the others—magniX hopes to have its powerplants in (scheduled) service by 2022—but Ganzarski was more circumspect when it came to an update on Alice:

“Eviation Alice continues in its development and will be an amazing aircraft. [Can’t] say more than that at this stage,” he wrote on May 19. (A test aircraft undergoing ground testing in Arizona in January caught fire from what officials at the time thought was a ground-based battery system.)

While the timeline may strike many in aviation circles as ambitious, the magniX team includes former employees drawn from a who’s-who list of aerospace and technology brands, including Airbus, Boeing Co., Space Exploration Technologies (better known as SpaceX), Tesla, and Pratt & Whitney, among others, according to the company website.