Cancellation may have been 'a blessing' to event

When the COVID-19 pandemic forced the Reno Air Racing Association (RARA) to make the difficult decision in late June to cancel the 2020 Stihl National Championship Air Races, which were scheduled for September 16 through 20, that might have been a blessing in disguise for the organization. 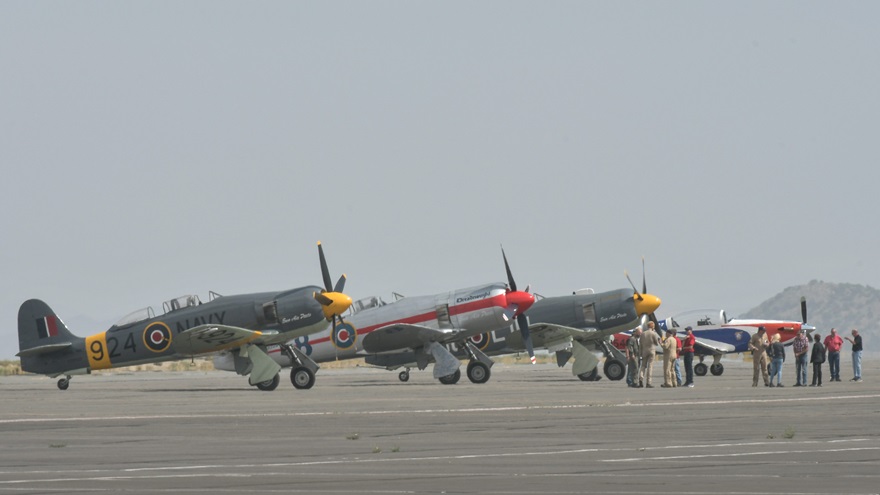 Smoky haze from California wildfires is evident as some pilots with the Reno Air Races gather on the ramp at Reno/Stead Airport on what would have been the 2020 race weekend. Photo by Joanne Murray.

Had plans continued for the September races, RARA almost certainly would have faced a much more costly, last-minute cancellation when smoke from California wildfires shrouded the course at Reno/Stead Airport in Reno, Nevada, for most of race week.

“As I’ve come to say to people, God works in mysterious ways. Had we not been canceled by [COVID-19], it would have been worse for us,” said Fred Telling, RARA board chairman and a veteran North American T–6 racer at Reno. He flew in to Reno during what would have been race week, and had to shoot the ILS because visibility was less than two miles. “I’ve never done that in Reno,” he said. “On Friday morning it cleared up enough that there was seven or eight miles of visibility.”

“From a race standpoint we wouldn’t have been able to practice Sunday the week prior, or do our qualifications Monday, Tuesday, and Wednesday morning,” said Tony Logoteta, RARA’s chief operating officer, noting that heat races normally begin on Wednesday afternoon—and conditions didn’t improve until Friday afternoon. “We have such an emphasis on safety that I can’t imagine we would have proceeded with no practice and no quals.” 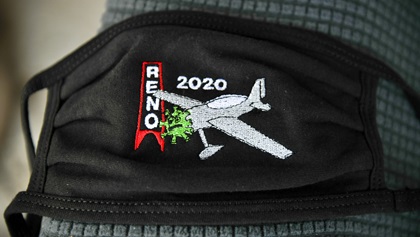 The decision to cancel was made because of state restrictions on the size of public gatherings, implemented to help reduce the spread of the coronavirus—which also led to cancellation of the Sun ’n Fun Aerospace Expo, EAA AirVenture, AOPA’s regional fly-ins, and almost every airshow scheduled during 2020. RARA had spent eight or nine months planning for this year’s races when COVID-19 hit and the organization lost admission, vendor, and sponsor income, Logoteta said. “If we’d just stubbornly gone forward, we wouldn’t be talking about the future. As painful as it was to make the decision, we know it was the right one.”

“The aviation community in 2020 was a wash. There isn’t a museum or event that isn’t struggling. We realize we’re not alone,” said Telling, adding that it’s even worse in Reno, which normally hosts numerous special events. “The Reno community itself has been hit hard. Air races make a significant contribution to the local economy.”

To help fill the void left by the canceled races and keep its audience engaged, RARA streamed race footage from previous years. Its social media sites tallied nearly 200,000 video views during September, with more than 2,000 hours of video watched. Some 150,000 social media views were logged just on September 19 and 20, which would have been the 2020 race weekend. Most popular of the archived races streamed were the 2018 Formula 1 heat races, the 2018 Biplane Class heat races, and the 2019 Formula 1 heat races, Logoteta said.

“Air racing really started with the Formula 1, so it makes sense they have such a long-term following,” he noted. “We had a lot of positive comments from people thanking us for putting up the races [online], and many said they are looking forward to next year. We’re definitely happy with how it went. We’re still working on some more programming through the rest of the year.”

“One of the things I heard that people particularly liked was we aired a lot of the raw footage with the commentators who were doing it live during the race,” Telling added. It was more extensive commentary than after the races were edited for broadcast. “Formula and biplane attracted a whole bunch of people.”

Some members of the Reno air racing community held an informal “September Family Race Reunion 2020” at the airport during what would have been race weekend in Reno, drawing between 70 and 100 people who gathered in small groups.

Logoteta said veteran racer Dennis Sanders told him that he’s been coming to Reno every September for years, and he wasn’t going to miss this year. Sanders did come for the reunion weekend—and he and his crew from Sanders Aeronautics in nearby Ione, California, brought not one but three Hawker Sea Fury airplanes. 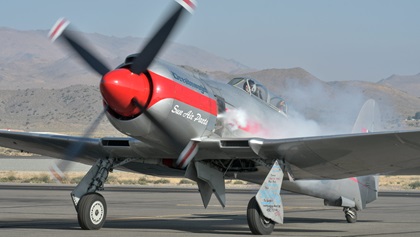 “My dad took my brother and I, and my mom, and we all went to the Reno Air Races in 1968,” said Sanders, who won the 2019 Unlimited Gold Class championship in Dreadnought, a modified Sea Fury—the same aircraft in which his son-in-law, Joel Swager, won the same title the year before. Sanders was almost 10 years old on that first visit, and has returned to Reno every September since then. He began crewing for racers in 1977; his family took Dreadnought for the first time in 1983—and it’s gone every year since, he said.

A Super Corsair with a Pratt & Whitney R-4360 Wasp Major engine won in 1982. “My dad said, ‘We’ve got to put a 4360 in the Sea Fury.’ We had a family meeting, and the question was, how long are the Reno air races going to survive? We thought, five more years.”

Sanders said he’s glad their assessment was incorrect. “I’ve gone to Reno so long, it’s kind of like duck hunting—we’re going to go,” he laughed. At first he was going to fly one airplane, then decided to take three Sea Fury airplanes—Dreadnought, 924, and Argonaut. Mike Brown, his next-door neighbor who races the North American P–51 Mustang Goldfinger, also flew to Reno, albeit not in his race airplane. “We went up there and we parked on the ramp where we always park. There must have been 50 people—it was just like Reno.”

On the ramp Sanders met a man who told him he was among 12 groups camping in the nearby Valley of Speed, like they always do during race week. He didn’t expect to see any aircraft. “It’s a fraternity, it’s a friendship. It’s what you do,” Sanders said.

The pandemic gave everyone concern. “The whole family has been involved in [Reno] for so long, Fred Telling called to talk to us about what we thought. I said, ‘Man, if I were you, I think I’d call the races early and save your money for next year.’ I breathed a sigh of relief that my little event that I cherish called the event, and capitalized on saving their money, to hopefully go air racing again another day. We’ll see everybody next year in 2021,” Sanders said.

RARA is kicking off a donation campaign, Logoteta said, and contributions to “Preserving our Legacy” can be made online now. While 2019 was a good year, the races lost money, he noted. “We still have a very large gap between where we need to be and where we are, financially.”

There’s a lot to look forward to in 2021, Logoteta added. It will be the debut of the STOL competition, which was demonstrated in 2019 and has been officially accredited by the FAA; it would have debuted this year. “We’re really excited about that,” he said. “The fans really seem to dig it. It’s all right in front of them.

“We have the [U.S. Air Force] Thunderbirds coming back in 2021, and we’re excited to have them back. We basically rolled our performers from 2020 over to 2021. It will be a nice, full performer lineup in addition to seven racing classes.” Logoteta also expects a big racing school in June, based on interest from new pilots and everyone else’s need to requalify. He expects a full field next September. “We know people are just itching to see some racing and we look forward to putting on a good show for them.”

“I’m very heartened by the support we’ve had, more by the racing community broadly, and we’re going to keep up the virtual activity through the fall,” said Telling, adding that he also wants to show continued progress in introducing young people to aviation. RARA’s educational efforts reached more than 7,000 kids in 2019, he said.

The 2021 Stihl National Championship Air Races are scheduled to take place September 15 through 19.

Technical Editor
Mike Collins, AOPA technical editor and director of business development, died at age 59 on February 25, 2021. He was an integral part of the AOPA Media team for nearly 30 years, and held many key editorial roles at AOPA Pilot, Flight Training, and AOPA Online. He was a gifted writer, editor, photographer, audio storyteller, and videographer, and was an instrument-rated pilot and drone pilot.
Go to Mike Collins's Profile
Topics: Air Racing, COVID19, Events 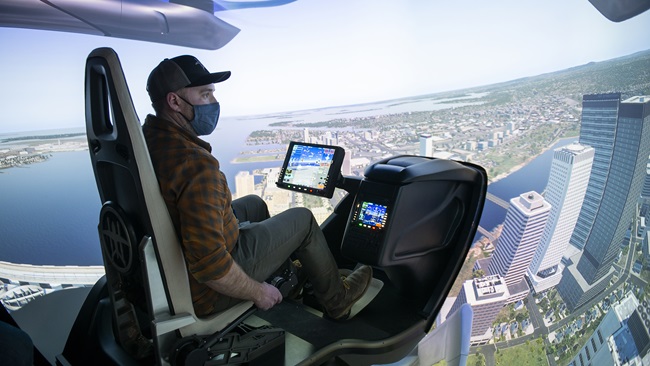 Pulitzer race to resume in May 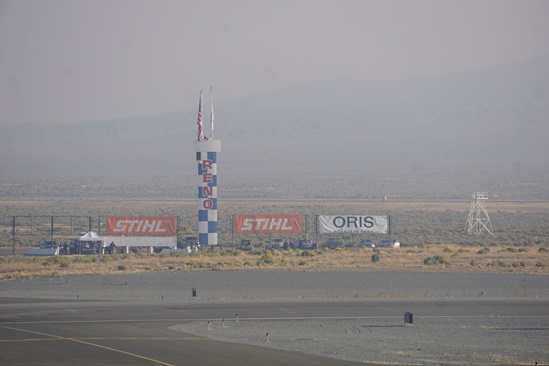