Get the app Get the app
AOPA Members DO more LEARN more SAVE more - Get MORE out of being a pilot - CLICK HERE
News & Media Meet Sisters of the Skies Founder, Lt. Christine Angel Hughes

Sisters of the Skies (SOS) is paving the way for a new generation of Black female pilots who might not be used to seeing many commercial pilots who look like them. 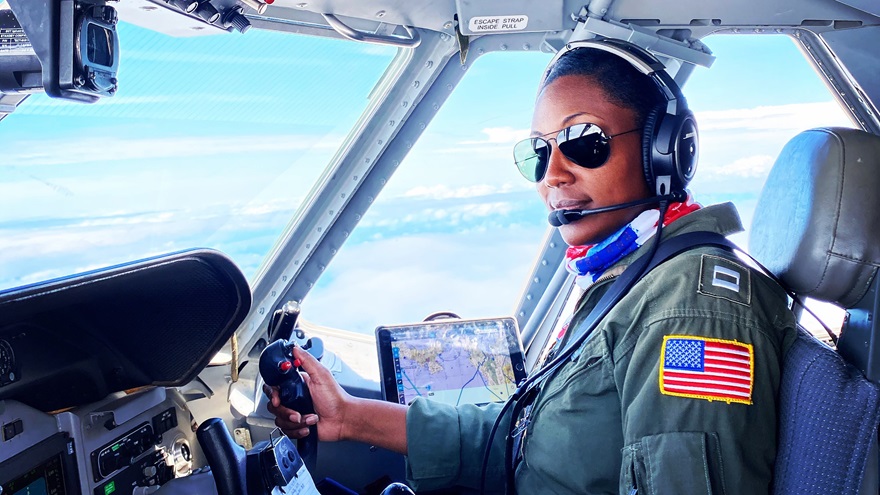 Sisters of the Skies Inc., a 501 (c)3 national aviation organization, is composed of “women of color cultivating and promoting minority women in the aviation industry through scholarship, mentorship, and most of all emotional support.” The organization works to support and inspire more Black female pilots to enter the workforce.

Lt. Christine Angel Hughes, currently a U.S. Coast Guard pilot, founded the organization in 2015. Hughes is one of four children, born to Haitian immigrants in New Jersey, and had the idea and determination to become a pilot at a very young age. Hughes has always believed that “mentorship is of the utmost importance,” and realized that while wanting to become an airline pilot, she never had anyone to look up to who looked like her. She believes that SOS shows young girls that there are pilots who do look like them.

Most pilots know the phrase, “aviate, navigate, communicate.” SOS has adopted a new interpretation of that familiar phrase with the understanding that Black women face many challenges when entering an industry heavily dominated by white men. The organization has created a pathway for minority women inspired to join the aviation industry by providing scholarships to young aviators, offering mentorship in their quest to navigate the industry, and assistance to communicate their desire to become a career professional pilot.

SOS also provides mentorship to college students who have very little or no exposure to professional pilot opportunities. There, the group works to demonstrate to young Black women that a career as a professional pilot is attainable. SOS also has an outreach program geared toward students in elementary, middle, and high school.

AOPA checked in with Hughes to find out more about her journey and passion to inspire others.

What led you to a career in aviation?

I first realized I wanted a career in aviation when I was 11 years old sitting in my sixth-grade science class! My teacher introduced the topic of astronomy and I knew right away that I wanted to be in the sky and possibly outer space.

What position in your aviation career are you the proudest of?

My position as a [certificated] Flight Instructor (CFI) is one of my proudest accomplishments in my career. The ability to share the gift of flight with someone is extremely satisfying to me. I will always remember the first time I set foot in a small aircraft for an introductory flight at 16 years old. That feeling is indescribable and I’m excited to help others experience it as well.

Can you please elaborate on your career path?

After deciding I was going to be a pilot in the sixth grade, I joined a JROTC-like program named Eagle Flight Squadron (EFS) while I was in high school. Through EFS, I began flying and earned my private pilot certificate before I started college. I attended Jacksonville University, in Jacksonville, Florida, as a flight major and would earn the rest of my ratings to include instrument, commercial, multi-engine, CFI, and CFI-I. I worked full-time as a CFI after I graduated college in 2008, in hopes of building enough flight time to work for the regional airlines. After 1.5 years of instructing and evaluating the struggling aviation industry due to the economic recession, I shifted gears and applied to be a military pilot. In 2009, I joined the United States Coast Guard and have enjoyed flying the HC-144 Ocean Sentry aircraft. I’m currently active duty and stationed in Miami. 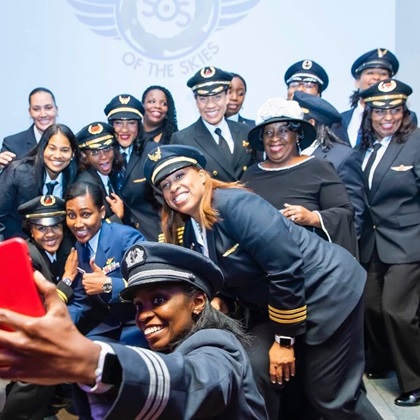 How was Sisters of the Skies created?

Sisters of the Skies was created through a casual conversation between me and one of my mentors. I was scrolling through Facebook when I stumbled upon a picture of a Black woman in a pilot uniform. I eagerly clicked on her page and learned that she was a pilot at a major airline, and she flew the B787. This random pilot embodied everything I dreamed of…and she looked like me! I reached out to that pilot, Nia Gilliam-Wordlaw, and we began conversing about the aviation industry. Through our conversations, we discovered how amazingly small the Black female pilot network is, and I suggested we start a GroupMe chat and half-jokingly mentioned that we’d probably be able to get ALL of the Black female pilots in the group! Well, that joke wasn’t too far off as we have since decided to expand beyond a social group to form a non-profit organization focused on increasing the number of minority female pilots!

What is Sisters of the Skies doing to help minorities have more opportunities within the industry?

SOS believes the first step in getting more young girls involved in aviation is exposure. SOS members are highly engaged in their local schools and communities and they make it a priority to make sure young girls see them in uniform. Secondly, SOS offers scholarships for flight training. To date, we have awarded nearly $50,000 for our recipients towards obtaining their pilot certificate or ratings. Lastly, we offer a vast, all-inclusive mentoring network established to help bridge the gap between student pilot and ATP. Through our mentorship program, mentees have the opportunity to communicate first-hand with SOS members in all disciplines of the aviation world. We believe such mentorship is vital to the success of a young woman’s aviation career.

What do you hope to accomplish through Sisters of the Skies?

Through SOS, I hope to accomplish the ‘normalization’ of the female pilot. Representation truly matters to a young person who has never seen their own image reflected in a profession. It’s hard to imagine what your potential could be if you’ve never actually seen someone who looks like you and doing what you want to do.

What would you say to young Black girls who want to become pilots?

I wouldn’t say anything…I’d show them! SOS holds a one-day aviation camp, named Girls Rock Wings (GRoW), every year in an effort to increase the exposure of aviation to girls aged 10-18. During GRoW, our participants are surrounded by professional Black female pilots and the highlight of the camp is an introductory flight by a [Sisters of the Skies] member!

What can other organizations like AOPA, EAA, and NBAA do to help your mission?

SOS is a small, unique, non-profit organization. We realize one of the biggest obstacles in any flight career, is finances. Through donations and/or sponsorship, SOS is able to provide opportunities for under-represented young women to begin and/or further their flying careers. We use such donations/sponsorships to award flight training scholarships and to host our GRoW aviation camp in different cities.

What do you feel your biggest hurdle has been throughout your career?

Without a question, gender discrimination. I’ve been through both civilian and military flight training, and I’ve experienced this more in the military. I would venture to say that all women pilots have flown with, or will fly with, a male pilot who believes women shouldn’t be flying. My biggest obstacle was trying to break through the pre-conceived bias some of my instructors had against women. This, in turn, undoubtedly stacked the cards against me and heightened my stress level. Being ‘average’ simply wasn’t an option for me if I wanted to pass. In fact, my ‘average’ was actually ‘below average’ when compared to the majority.

Where do you enjoy flying? Do you have a favorite airport?

I absolutely love flying in the Caribbean! The water is just so clear, and its different hues of blue is nothing short of magnificent! My favorite airport that I’ve landed at is in Turks and Caicos because I get to fly the approach over such beautiful water.

Do you enjoy flying GA when you aren’t flying commercial?

Absolutely! I maintain proficiency and currency as a flight instructor and enjoy sharing my love of flight, and aviation, with family and friends.

I feel we have a long way to go. If you look at the figures, the percentage of women pilots has pretty much remained stagnant for decades. How come our numbers remain stagnant over generations? I believe it ultimately boils down to exposure. Up until I became a pilot, my parents had never seen a female pilot. During my grandparents’ upbringing, African Americans weren’t allowed to be pilots due to laws such as segregation, Jim Crow, etc. A career as a pilot, especially in the Black community, isn’t something many people often see as attainable. That’s why it’s important for organizations such as Sisters of the Skies to infiltrate our communities and expose the youth to a career they may have never even heard of. It really is as simple as wearing a pilot uniform to a career day at an elementary school.

What do you think aviation will look like 10 years from now?

COVID-19 has really taken the aviation world by storm. Prior to, I felt as if aviation was on the rise as airlines were growing exponentially and pilots were in such great demand. Now, I fear people will no longer view a career in aviation as a smart or reliable career choice. Anyone with some tenure in the aviation world truly knows how cyclical and fickle the industry is. It’s almost predictable that every few years the economy will suffer some catastrophic event which leads to the massive furlough of pilots and the consolidation of airlines. That’s the story of aviation. I believe all the excitement and momentum the aviation industry had prior to COVID, has ceased and the industry is trying to figure out how to survive the pandemic. I believe the industry will be profitable again in 5 years, albeit, a lot smaller. In 10 years, I believe the aviation industry will be more efficient, nimble, and cautious. I think the pandemic essentially solved the looming ‘pilot shortage’ that was predicted to be at its height in 10 years!

Senior Manager of Media Relations and Public Affairs
AOPA Senior Manager of Media Relations and Public Affairs, Jennifer Non joined AOPA in 2017. A former traffic reporter turned media relations specialist, and native Washingtonian, she enjoys traveling and is working toward her private pilot certificate. She was recently honored by Ragan Communications and PR Daily with a Top Women in Communications Award, in the Diversity, Equity & Inclusion Champion category and is also a member of the Board of Nominations for the National Aviation Hall of Fame.
Go to Jennifer Non's Profile
Topics: People, Aviation Organizations, Aviation Education Programs