With armed U.S. Air Force F–15 Eagles circling above like angry hornets and a thick column of smoke rising from the wounded city, three officers aboard a Civil Air Patrol Cessna 172 were among the first to witness the terrible scope of the devastation wrought when hijacked airliners struck the World Trade Center in New York on September 11, 2001. Their memories remain vivid. The photographs they took helped shape the emergency response, informed the investigation, and demonstrated the capability of the U.S. Air Force auxiliary.

Two giant office towers, which had for decades served as a steady landmark that any pilot could recognize in an instant, had been pancaked and blown to flinders. Nearby buildings were scorched and ruined, acres of glass blown out and scattered amid the dust and ash on the streets below. Fire trucks, ambulances, and police cruisers were barely recognizable in the debris. White dust, largely a composite of crushed concrete and fluorescent lights, hundreds of floors’ worth, covered lower Manhattan like snow scattered hundreds of yards away from the smoke plume’s origin, all the way to the Hudson River.

They said little other than "oh, my God" as their cameras clicked away in the cabin of the Skyhawk, documenting history. Nineteen years have passed, and Lt. Col. Andrew Feldman said he has felt each approaching anniversary since.

“I get to around September first and I start to get flashbacks and shake,” Feldman said in a video chat. “As we get closer and closer to September eleventh, I have hot and cold running nightmares.”

Feldman was in the back seat of the Cessna, taking photos on film with a 35-mm Nikon fitted with Zeiss lenses. Lt. Col. Warren Ratis was in the right seat with a Nikon D90 digital camera, and working the radios, negotiating with New York City aviation authorities who attempted to block the CAP mission with a helicopter and turn them away as the flight approached the city from the east.

The pilot in command, Lt. Col. Jacques Heinrich, reached by phone a few days before the video conference with Ratis and Feldman, remains with the Long Island Group, though he has let his flight instructor (instrument) certificate lapse, at age 84. His principal memory of the September 12, 2001, mission is the oily smoke, which he had to navigate through each of the four times they orbited what came to be known as “Ground Zero,” where new buildings have risen since, and where a stone waterfall plunges into what were once the depths of America’s despair.

“It was just another mission, nothing more,” Heinrich recalled. “Of course, it turned out to be 9/11.” 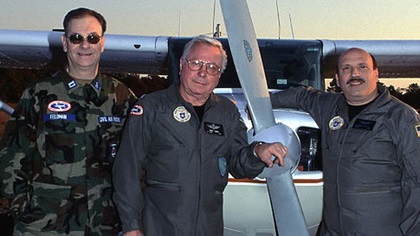 Heinrich said he never saw the F–15s (radio communication was delegated to Ratis in the right seat), and was so focused on flying precisely throughout the mission, maintaining the proper bank angle and transitioning in and out of IMC over the scene they had been tasked with documenting, that the calamity that was below has not provoked nightmares, in part because the task of navigating his IFR flight plan from Long Island MacArthur Airport to lower Manhattan by way of John F. Kennedy International Airport, later maintaining level flight with steady turns 1,500 feet above the rubble, flying in and out of instrument conditions created by the smoke plume, absorbed his attention at the time.

“I was banking to the right side… so they were able to take pictures,” he explained. “They can give you a better description of the site than I can.”

Feldman, Heinrich, and Ratis had all arrived at the airport shortly after 9 a.m. on September 12, 2001, though it took hours to orchestrate the necessary clearances and approvals to fly the mission because the national airspace system had been locked down the day before, and JFK was eerily quiet as they flew over at around 4:40 p.m. Eastern time, en route to the World Trade Center. Two U.S. Air Force F–15s were flying a de facto combat air patrol over New York City, and U.S. Navy warships were painting the Cessna with radar so constantly that the transponder ident light never went out, just alternated degrees of brightness. “We probably gained 20 feet in altitude from all of the RF being aimed at us,” Feldman recalled.

The fighters struggled to slow down enough to fly alongside and signal the CAP crew to tune in Guard for any necessary communications, but that message was successfully communicated with hand signals and the fighters returned to their much higher orbit.

“No one bothered to tell us on that flight that we were flying a hot tail mission,” Feldman recalled, using a term for armed warplanes. “If somebody misbehaved, we shouldn’t be near them.”

Though the photo mission had been authorized by national command authority in the White House, that word had not made it to New York City aviation authorities, and a city helicopter attempted to intercept the CAP Skyhawk and force it away. A somewhat lengthy radio conversation ensued, Ratis informing the city helicopter that they were on an authorized mission and intended to complete it, while the helicopter crew turned to air traffic control, requesting that ATC order the Cessna away. The controller responded that the CAP crew “had more authority” than ATC did, but still, the helicopter crew insisted.

“I finally said, ‘look, we’re staying here, we’re doing our mission, this is what we’re assigned to do,’” Ratis recalled. “’If you have a problem, take it up with the F–15s that are above us. They will convince you otherwise.’ With that, he peeled off and went away.”

Other than the radio conversations, little else was said as the crew approached their assigned photo mission. Images on television, taken from cameras on the ground, had not prepared them for what they saw from the sky.

The twin towers had collapsed the day before, scattering debris for blocks around. Nearby buildings were damaged, and some would ultimately be demolished. Rescue crews were still searching frantically for survivors in the rubble where nearly 3,000 people had lost their lives—the precise number will never be known.

“You got to see a lot of the emergency response teams. They were walking over steel beams, it looked like ants on pick-up sticks. That’s how intense it was… a combat scene,” Feldman recalled. “This almost looked like pictures from World War II after Dresden [Germany] was bombed.”

Ratis, who had worked for 10 years in the World Trade Center, had many friends in the rubble below, and memories of the first attempt by terrorists to bring down one of those iconic buildings years before, an explosion that had ripped through the underground parking garage.

“This was far, far, far worse than that was,” Ratis said. “It was something you can’t explain to someone unless they see it. It was truly rough.”

Ratis and Feldman captured more than 40 photographs between them, the Cessna making four orbits around the disaster scene. They returned to the airport from which they had launched at 5:28 p.m. and were met by local police and FAA officials, and “almost arrested at gunpoint,” Feldman recalled. Their authority for the mission and orders had not been clearly communicated to all concerned, but the uniformed CAP officers managed to convince the authorities that they had, in fact, been authorized.

“They came at us rather strongly, rather forcefully,” Heinrich recalled. “Everybody was a little bit on edge… we kept our cool.”

‘Make you want to cry’

The job was far from over for Feldman and Ratis, who spent the night forcing large digital image files through a 1,200-baud acoustic modem to the Federal Emergency Management Agency. Feldman had to wait until morning to get his film developed into prints by a photo lab whose owner he swore to secrecy, then scan them and send them to FEMA. He had that old Nikon film camera at hand, and held it up during the interview.

Ratis said he remembers the day with a mixture of pride, and grief for friends whom he lost:

“Quite honestly, I feel happy that I could have done my part. I wish it never happened, I mean, let me preface it by all that. I wish I had never done this, because it didn’t happen, but it did. Because it did, I’m happy that I was able to be part of a team that took on this challenge and successfully completed it, along with Andy and Jacques. That’s a rewarding thing.”

Ratis has told the story many times over, including on the occasion of the tenth anniversary of the attacks in 2011.

For Heinrich, the PIC, it was “just another mission.”

“I was a mission pilot for many, many years,” said Heinrich, who remains a CAP member, as do Feldman and Ratis. “It was just another mission, nothing more.” 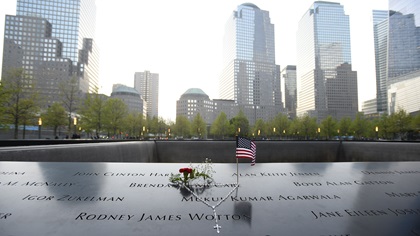 Feldman and Ratis credited Heinrich with superb flying to safely negotiate the hazards of the mission while traversing the smoke plume in and out of IMC, all the while giving them a steady platform from which to take the photos.

“Some were used by forensics to identify where parts of the cockpit of the two planes were … apparently they used that to do DNA testing to find who the attackers were, the people who took over the cockpits,” Ratis said. “They found that stuff.”

Feldman said that the lingering effects, including the September nightmares, do not diminish his pride in having been a member of the team that completed this critical mission.

“It put CAP in a different light, and CAP is now doing an awful lot of mission flying over many different disasters, so, in effect, what we did on 9/11 put CAP into a new mission,” Feldman said.

Ratis, who lost his information technology job with the loss of his former office, became a federal law enforcement agent with U.S. Customs and Border Protection, where he has worked for 18 years. He agreed that the mission had significance for the CAP beyond the simple capture of photographs.

“Since then the Air Force has integrated us even further … they consider us regular airmen,” said Ratis. “We do have a bigger role in that regard. I’m just hoping our funding stays where it is.”

Ratis did not mention flashbacks or nightmares, but his memories of that day are intertwined with the friends he lost.

“The worst feelings I have is because I worked in the building for so long, and I know so many people who didn’t make it,” Ratis said. “That’s where my feelings are, for the people that I know who are no longer here. It was a lot of funerals I went to, as a result. Some stories that’ll just, you know, make you want to cry in some regards.” 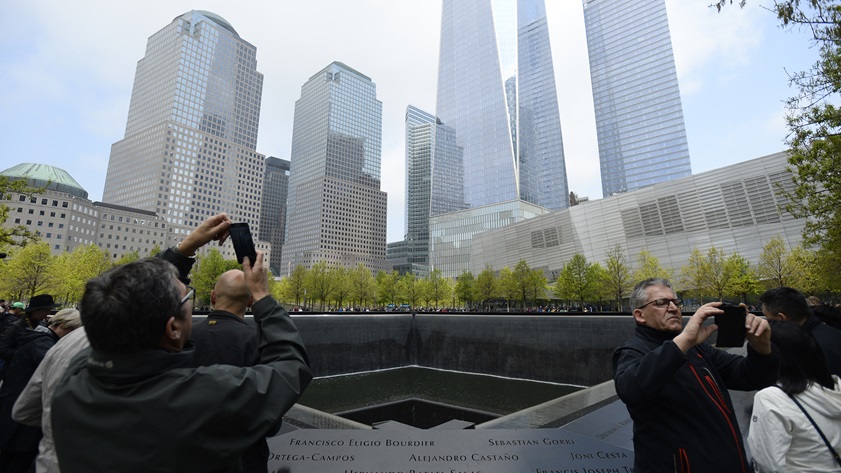