Get the app Get the app
Get the latest news on coronavirus impacts on general aviation, including what AOPA is doing to protect GA, event cancellations, advice for pilots to protect themselves, and more. Read More
Already a member? Please login below for an enhanced experience. Not a member? Join today
News & Videos Air attack helps firefighters gain foothold

An epic and devastating late-summer wildfire outbreak across the West has charred millions of acres and claimed dozens of lives in several states. Firefighters on the ground and in the air faced challenging conditions and lethal hazards, some losing their own lives as they worked to protect people, homes, and property, including at least one airplane factory. 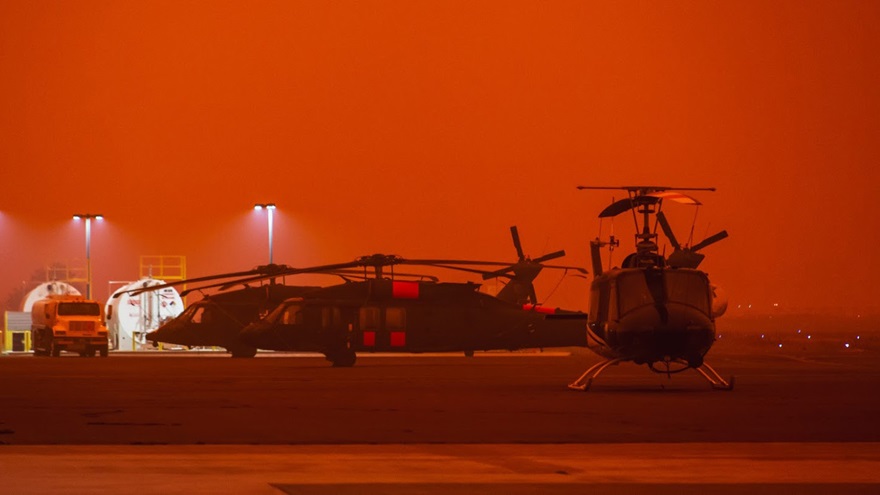 Among the lives lost, two firefighting pilots were killed in a collision of single-engine air tankers fighting a fire in Nevada on July 30, according to a preliminary report from the NTSB. Van’s Aircraft temporarily shut down the firm’s Oregon factory on September 11 as a major fire approached within 20 miles of Aurora State Airport, where the company is based. Several firefighting helicopters were also based there, supporting suppression efforts. Operations at Van’s resumed on September 15 after fire crews managed to slow that fire’s advance enough to give the company confidence workers could safely return to their jobs, if not to their own homes.

“The fire progression has slowed significantly, which is good,” said Greg Hughes, who handles media and marketing for Van’s, in a telephone interview September 15. Rain had not yet arrived, but “the big difference now is, the winds aren’t blowing.”

There was a tradeoff, however. Calmer winds allowed smoke to hang heavily over the ravaged landscape, limiting visibility to a quarter-mile or even less, temporarily grounding the air attack.

A few days before, the winds had been “howling,” driving fires rapidly across tinder-dry vegetation and consuming homes and threatening cities. 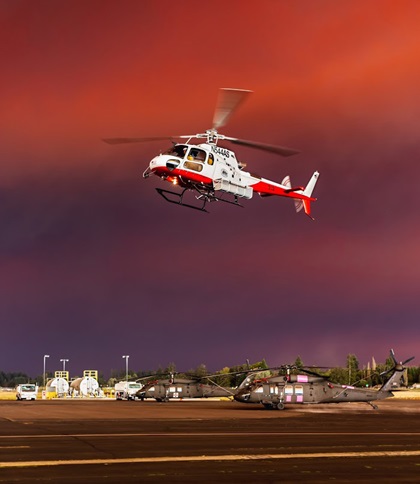 “A very significant portion of our staff has been affected by this, outside of work,” Hughes said. At least one member of the company’s staff of about 80 people had lost their family’s home, and others were still waiting to return to evacuated areas and learn the fate of their own property. Hughes had at one point been poised to scramble to safety himself, warned by officials to get packed and ready to go at a moment’s notice.

The company continued to post daily updates on the status of operations. As of September 17, the factory was open and working to catch up on customer orders.

The National Interagency Fire Center on September 16 listed 10 states with active, large fires engulfing about 4.4 million acres. For the year to date, as of September 16, 42,363 fires and 6.9 million acres had burned, according to the agency’s website, with 79 active fires across the country. An online map of active fires made it clear why smoke from the West Coast darkened skies all the way to New York, at times reducing local visibility to a quarter-mile or less; on clearer days, firefighting aircraft of all sizes worked in concert with ground crews, dropping millions of gallons of retardant and water, their exploits covered by local media and celebrated on social media.

The California Department of Forestry and Fire Protection, better known as Cal Fire, had achieved 30 percent containment of the August Complex by September 16, the largest of many fires across the state that had burned more than 3 million acres. Cal Fire ground and air crews were working alongside federal partners, with crews from Canada and Mexico also pitching in as the Golden State faced historic destruction. Joshua Nettles, promoted in December to his post of division chief for tactical air operations, said in a telephone interview September 15 that the record-setting size of the largest fires was only part of the story.

“It’s not just the number of acres, it’s the amount of fires that we have, the sheer number at the same time,” Nettles said. Typically, there might be two or three major fires at any given time. “Right now, I couldn’t even give you an accurate number.”

Cal Fire’s online overview of active incidents on September 17 listed 12 fires at least 17,000 acres in size.  The agency’s aerial assets were fully engaged. YouTube users posted many videos, including this one taken by a helicopter showing two drops by The Spirit of John Muir, a Boeing 747 operated by Global SuperTanker, a Colorado company that deploys the world’s largest firefighting aircraft on contracts around the world.

Photographer Walter Colby, who works for Helicopters Inc. and is based in Hayward, California, filmed the massive tanker in action, in a video posted August 20 that had been viewed 2.8 million times by September 16. He said in a telephone interview September 16 that the outbreak had created huge demand from the company’s news media customers for aerial views of the rapidly advancing fires, and the firefighting efforts.

“In the first days of the fire, we were flying eight hours a day, seven days a week,” Colby said. They only stopped when the smoke got so thick that it limited visibility and endangered the turbine engines. “Our mechanics asked us not to fly.”

Colby said that the largest air tankers, including The Spirit of John Muir and the DC–10 operated by 10 Tanker tend to steal the show, their sheer size and the massive volume of fire retardant they can drop creating stunning visuals, but he also singled out for praise the much larger numbers of smaller aircraft in the aerial arsenal, helicopters and fixed-wing turboprops that can navigate the narrow canyons and other tight spots. “Praise be to the little guys who can get in there.” 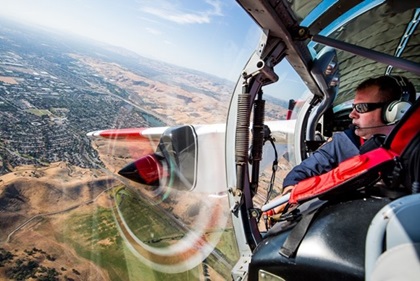 Nettles said Cal Fire air crews and contractors were pushing hard, but able to keep up without exceeding the strict limits imposed for safety, including a maximum daily on-duty limit of 14 hours, with no more than seven hours of actual daily flight time allowed for each pilot.

“We’ve been hiring pilots and training them up over the last couple of years,” Nettles said. The Cal Fire fleet includes many types of aircraft, both fixed-wing and rotorcraft. The workhorses are the North American Rockwell OV–10A “Bronco,” a twin turboprop adapted from military use as a tactical observation platform that circles high above the tankers and coordinates the drops. The Grumman S–2T, a tanker that can carry 1,200 gallons, is also deployed in numbers.

Nettles said on September 15 that all 23 of Cal Fire’s S–2s were working fires up and down the state, backed up by the larger tankers including the Boeing 747 and McDonnell Douglas DC–10 conversion, as well as a Lockheed P–3 Orion contracted through Airstrike Firefighters.

The fixed-wing tanker drops demand precision, and Cal Fire is very selective about who is hired to fly these missions. Nettles said experience has taught the department that altitude and approach speeds are critical to effective dispersal of fire retardant. Achieving an even coat is the goal.

“With our S-2s, we shoot for the pilots to be at 150 [feet] agl when they drop their retardant,” Nettles said. Pilots must learn to judge that by sight. “We don’t have a radar altimeter or anything in those aircraft, there’s no instrument” to precisely measure height above the ground. They also aim to disperse at 110 to 120 knots. Any faster, and the retardant tends to leave the downwind side of the trees still exposed. Not every pilot successfully completes the training program. “We do have a fail rate,” Nettles said.

The larger tankers like The Spirit of John Muir aim to drop from a little higher up, about 200 feet above the terrain.