Get the app Get the app
Already a member? Please login below for an enhanced experience. Not a member? Join today
News & Media Seaplane tugboat volunteer: 'It's just fun'

“Well, we got the first log tow of the year,” EAA AirVenture Seaplane Base tugboat volunteer Tom Scott said, slowing a small john boat to lasso a log in a cove at Wisconsin’s picturesque Lake Winnebago, just one of his many duties assisting seaplane pilots during the airshow July 26 to August 1. 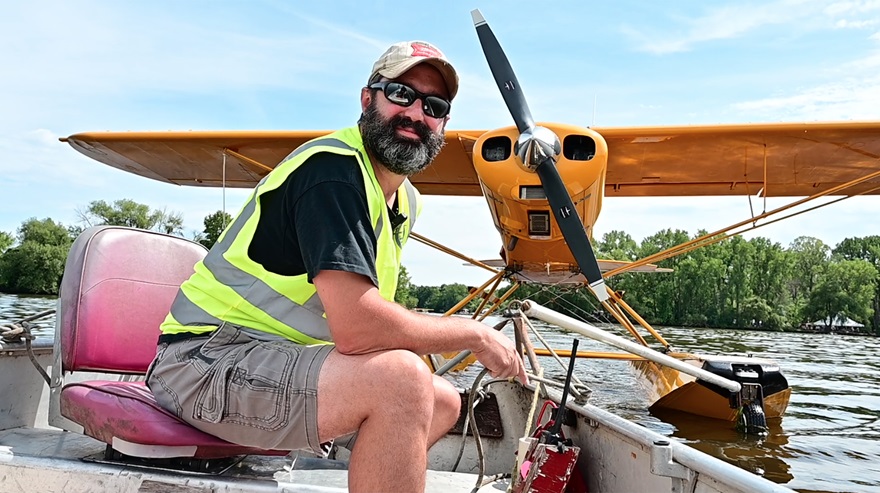 EAA Seaplane Base volunteer Tom Scott pulls a Piper Super Cub on floats to open water. Scott, who is not a pilot, said he loves his job because it is a unique experience in an idyllic setting. Photo by David Tulis.

The slimy, 4-foot-by-1-foot partially submerged deck pole could cause havoc for taxiing seaplanes if Scott or other seaplane base volunteers didn’t remove the underwater obstacle from the waterway.

I caught up with Scott in a small aluminum tugboat on a mission to deliver AOPA Editor at Large Dave Hirschman to a 1956 Piper Super Cub bobbing gracefully on floats in the cove. Hirschman has one eye on the weather and another on the temporary flight restriction enacted for the afternoon airshow.

We gracefully glided past a 1954 twin-engine, pusher-prop Piaggio P.136 amphibious flying boat with ocean waves painted on its skin, motored past an orange de Havilland DCH–2, followed by a Cessna 195 with a triple tail. “You should watch that thing on a takeoff run,” said Scott. “He gets halfway across the lake before lifting off, but it’s cool as heck.”

Hirschman noted an American Legend AL18 Super Legend Cub moored nearby. “That Legend Cub is nice looking and it's a good performer," he said as we closed in on the yellow Super Cub he would fly to Minnesota before sunset. 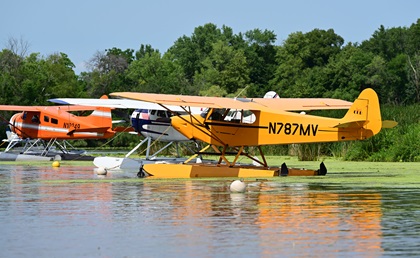 “Which side, right side or left side?” asked Scott while maneuvering the small boat. “I can take you either way, whichever is easier for you.” Hirschman stashed his mobile phone and nimbly boarded a pontoon.

Scott fished out a pair of plastic poles with ropes extending from each end, lassoing one side to each nosewheel of the amphibian Super Cub and cleating the other side past eyelets welded about a foot above the boat’s transom. The procedure stabilizes the floating aircraft, and Scott twists the throttle to get us moving.

“I’ve been doing this for 10 years now,” Scott said, slowing to enter open water outside of the sheltered cove. It’s clear he not only loves his job—he is very good at it too.

Scott said his favorite thing about volunteering with the seaplane crowd is “just being on the water and meeting the people.” He relishes working with volunteers and friends he’s made at the seaplane base through the years and considers his tugboat duties part of an Oshkosh family ritual. “My wife and son come up here too.” Reconnecting with “really good people” keeps him coming back year after year and the flying stories circulating through the seaplane base after the sun goes down are a bonus.

The laid-back atmosphere among seaplane aficionados contrasts starkly with the hubbub of activity at nearby Wittman Regional Airport, a couple of miles to the west. Pyrotechnic explosions from the afternoon airshow can be seen and heard in the distance, and vintage military aircraft roar overhead on their route to and from Warbird Island, a mile south of the floatplane haven. 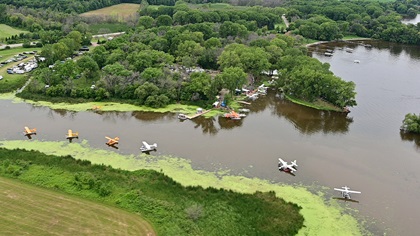 Before we knew it, we’d reached the mouth of the cove and during the smooth tow Hirschman completed his preflight routine. It took Scott about 20 seconds to separate the tugboat from the seaplane, untying each rope and tossing the rig into the boat, then giving a thumbs-up hand signal to Hirschman signifying that we’re clear of the floating Super Cub.

“Have a safe flight,” Scott shouted, accompanied with a hand-wave, before motoring back to base to help another seaplane pilot. Hirschman waved back, shouted “clear prop,” started the engine, and  taxied out of sight.

“You know, it’s different,” Scott said, reflecting on what brings him back to volunteer at the idyllic site year after year. “You don’t get to tow a plane around on the water anywhere else, so it’s a unique experience. I like being on the water and I like being near the airplanes. It’s just fun.”