Publication of a new federal aviation regulation, Part 89, and the concurrent, closely related overhaul of Part 107 on January 15 started the clock on major changes to the limits placed on nearly all unmanned aircraft. 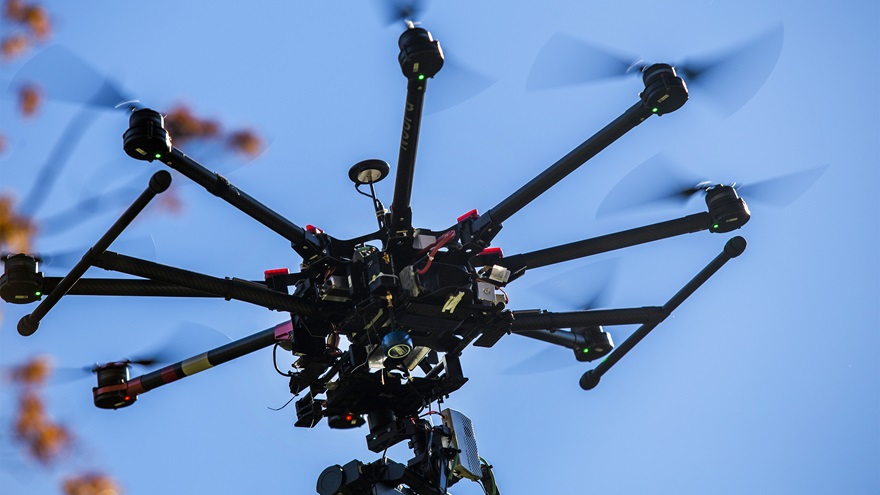 Virtually all unmanned aircraft flown outside of specifically approved locations will be required to transmit identification information starting in September 2023. Photo by Jim Moore.

Years in the making, this first major overhaul of regulations governing unmanned aircraft will apply those rules to virtually every such aircraft, including drones flown for recreation rather than profit, and traditional radio-controlled model aircraft. By the autumn of 2023, drones unable to broadcast what the FAA often describes as a “digital license plate” will be restricted to flying only in approved areas.

The advent of remote identification has long been a prerequisite for scaling up package delivery and other drone missions that have fascinated media and the public, as well as less glamorous missions such as infrastructure inspection. Law enforcement has been pressing for this requirement for years, seeking a tool that can help identify bad actors.

Thousands of AOPA members hold remote pilot certificates (for many, it is their only pilot certificate), and they will now be allowed to conduct night operations without a waiver within weeks, after completing updated training that the FAA will provide online at no charge.

The FAA, in a December 28 news release announcing the final language of two closely related rulemaking efforts, called these much-anticipated rules a “major step toward the full integration of drones into the national airspace system.”

AOPA was among more than 50,000 organizations and individuals who submitted comments about the proposed rules in 2020, and among many who urged the FAA to reduce the cost of compliance. AOPA strongly supports remote ID of unmanned aircraft, and particularly the FAA’s approach in achieving its safety and security goals without requiring incumbent aviators (manned aircraft) to participate. AOPA welcomed the specific prohibition that bars the vast majority of drones from using ADS-B for remote identification, a feature of the proposed remote identification rule that remains in the final version.

The FAA published on December 28 summaries of the final rule for remote identification of unmanned aircraft, and a separate final rule implementing changes to Part 107 that will allow flights at night and over people without a waiver.

The effective date of Part 89, along with changes to Part 107 allowing unmanned aircraft to be flown at night and over people by certificated remote pilots without a waiver. Note that many Part 89 (remote ID) requirements, including the core requirement to broadcast remote identification information, become effective at later dates.

All waivers of FAR 107.29 issued prior to March 16 are terminated. Pilots who previously operated under such a waiver will be required to comply with Part 107, including completion of initial test or recurrent training that includes night operation, in order to operate unmanned aircraft at night.

Unmanned aircraft must be manufactured and labeled in compliance with new FAA requirements to enable remote identification. Organizations may submit applications to establish FAA-recognized identification areas, where aircraft can be flown without conforming to remote ID (Part 89).

All unmanned aircraft operated outside of FAA-recognized identification areas must comply with FAR Part 89 requirements including broadcast of remote identification information.

Welcome changes were made, including most of those sought by AOPA, and others. The FAA made it somewhat less cumbersome for organizations to establish FAA-recognized identification areas, or FRIAs, where unmanned aircraft will be allowed to fly without broadcasting identification information after September 16, 2023, when the final provisions of Part 89 take effect.

AOPA Senior Director of Regulatory Affairs Christopher Cooper said AOPA appreciates and supports the hard work by the FAA to develop final rules that reflect many of the changes sought during a public comment period.

“Many of AOPA’s concerns were appropriately addressed, which will provide flexibility and reduced cost to the recreational and Part 107 communities while ensuring the FAA and law enforcement are able to identify noncompliant operators,” Cooper said. “AOPA also strongly supports the explicit prohibition of ADS-B Out for most UAS operations because it may lead to a potential reduction in ADS-B performance for air traffic management and manned aircraft users.”

Among the most significant changes that the FAA made to the proposed rules, the final version of Part 89 will not require remote pilots to maintain an internet connection to comply with remote identification requirements. The FAA will require only local radio broadcast of that information. This shift, opposed by some stakeholders but backed by AOPA and many others, will enable remote ID compliance in the many parts of the country where cellular service is not available. As proposed, the rule could have rendered large swaths of the country, mostly in rural areas, out of reach to professional and recreational remote pilots alike.

The FAA estimates that changes to Part 107 will save hundreds of millions of dollars, largely by reducing the cost of maintaining remote pilot currency (in-person remote pilot knowledge tests can cost $150 or more).

The final rule posted by the agency ahead of its publication in the Federal Register estimates collective 10-year net cost savings of $688 million, most of that (almost $594 million) enjoyed by certificated remote pilots who will be able to maintain currency by completing free online training provided by the FAA.

While the agency expects to spend about $146 million on staff time and other costs related to approving compliance documents submitted by unmanned aircraft manufacturers, the agency expects to save $251 million by significantly reducing the number of waiver applications it receives from the more than 200,000 remote pilots already certificated.

The estimated $227 million in net costs of implementing remote ID over the first 10 years will offset some of the savings for taxpayers and the industry as a whole, though the FAA noted in the final rule implementing FAR Part 89 that elimination of the internet connection requirement, along with another change from the proposed rule that will allow existing, noncompliant unmanned aircraft to be retrofitted with a broadcast module, significantly reduced the estimated cost of implementing remote ID compared to the original rulemaking proposal.

Ops over people may require retrofits

Some small unmanned aircraft currently in operation may qualify to fly over people as soon as the Part 107 updates take effect, though many are likely to require retrofits that could push them into a higher (more restrictive) category that will not yet be available on the effective date.

The FAA employed physics (based in part on research published in 2017) to define the four categories that unmanned aircraft will be divided into for purposes of regulating flights over people, operations that previously required a waiver under Part 107.

An aircraft will be eligible for Category 1, the least restrictive and most quickly accessible category, by having takeoff weight that is less than 0.55 pounds, or 250 grams, including required propeller guards. The final rule stipulates that Category 1, Category 2, and Category 3 small unmanned aircraft must “contain no exposed rotating parts that would lacerate human skin.”

This requirement did not apply to Category 1 aircraft in the proposed rule, and applying the requirement for propeller guards or shrouds that prevent skin laceration may delay the availability of Category 1 operations for some current aircraft. 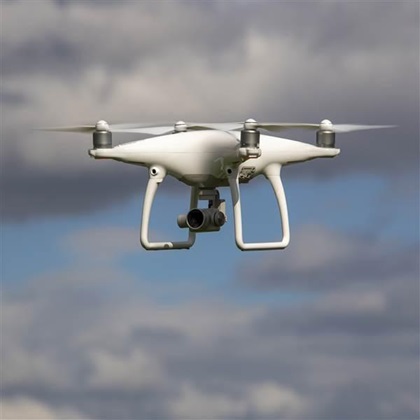 For example, the DJI Mavic Mini and Mini 2 quadcopters are marketed partly for their weight (listed in the specifications for both models at “less than” 249 grams). That puts these models just below the 250-gram threshold that triggers aircraft registration requirements in many countries. (The Mavic Mini and Mavic Mini 2 appear in several online third-party lists of “best” drones that weigh less than this now-international benchmark.)

DJI spokesman Adam Lisberg confirmed in an email that propeller guards would increase the weight of the Mavic Mini 2, as well as the original Mavic Mini, above 250 grams. He did not elaborate on what plans the company has, if any, to seek FAA approval for current or future models to qualify for operations over people in any of the available categories. “We almost never address speculative issues like this, especially when it comes to regulatory matters,” Lisberg wrote.

Unmanned aircraft that already qualify may begin operations over people under Category 1 on March 16, the effective date of both final rules.

The FAA will allow manufacturers to produce propeller guard retrofits enabling Category 1 operation (for drones weighing less than 250 grams, including the propeller guards) on the first day the rule is in effect; however, the agency notes in a summary document that the first means of compliance (MOC) and declaration of compliance (DOC) approvals required for Category 2 and Category 3 are expected to begin arriving nine to 12 months after the effective date.

Category 2 requirements pertain to small unmanned aircraft systems (sUAS) capable of causing injury less than or equal to the “severity of injury caused by a transfer of 11 foot-pounds of kinetic energy upon impact from a rigid object.”

Remote pilots will be spared having to do the math, or the drop tests, required to determine if a given aircraft is within this limit, unless they build their own drone: Manufacturers will be required to submit (for FAA acceptance) an MOC and DOC with this requirement specific to each model of unmanned aircraft.

Category 4 is for type-certificated unmanned aircraft. Type certificates (to be issued under FAR Part 21) will come with specific operating limitations. This category (and type certification of UAS) will apply to most if not all package delivery drones, along with others flown beyond visual line of sight, such as drones used to inspect railroads or pipelines.

The final rule reserves for the FAA consideration of parachutes as an MOC with Category 2 or Category 3 requirements.

“Some applicants might seek to use design features such as parachutes or other deployable devices that reduce impact velocity to establish a small unmanned aircraft would impact a person with a reduced amount of kinetic energy,” the rule states. “Such design features will require the FAA’s review to determine whether they assist in achieving an acceptable means of compliance if the small UAS relies on the proper functioning of these features.”

The FAA defines “sustained” specifically in the context of flights over open-air assemblies of people, and such flights will remain prohibited until remote ID is “operational,” for each category of UAS: 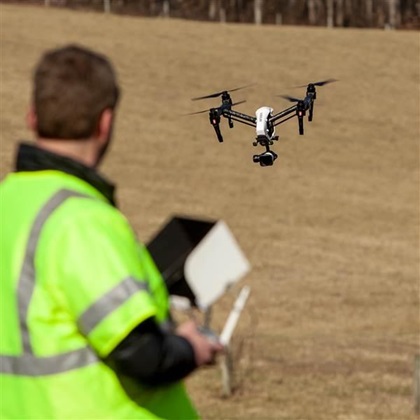 The rules for Part 107 operations require that the aircraft be equipped with at least one anticollision light that is visible from at least three statute miles away, adding to the proposed rule the specification that such a light must “flash at a rate sufficient to avoid a collision.”

The FAA specifically avoided stipulating what “rate” of flashing is “sufficient to avoid a collision” in the final rule:

Remote pilots will be required to complete free online training that will be published by the FAA on March 1 (45 days after publication of the final rule), according to the text of the rule. That training will cover all aspects of Part 107, including night operations, and completion will renew remote pilot currency for 24 calendar months.

Night operations without a waiver (of 107.29) can then commence on March 16 (the effective date of the final rule), presuming the remote pilot has completed the updated training released on or after March 1. The FAA will terminate all unexpired waivers of FAR 107.29 on May 15.