Get the app Get the app
AOPA will be closing at 2:30pm ET Wednesday, November 23rd, and will remain closed Thursday and Friday in observance of the Thanksgiving holiday. We will reopen Monday November 28th at 8:30am ET.
AOPA Members DO more LEARN more SAVE more - Get MORE out of being a pilot - CLICK HERE
News & Media County in crosshairs faces long hurricane recovery

Hurricane Ian's name was quickly retired with more than 100 lives lost and a trail of damage across two states, though airports in the hardest-hit region of Florida were back in service within days. Residents in the hardest-hit areas, particularly Lee County on Florida's southwest coast, face years of work to fully recover. 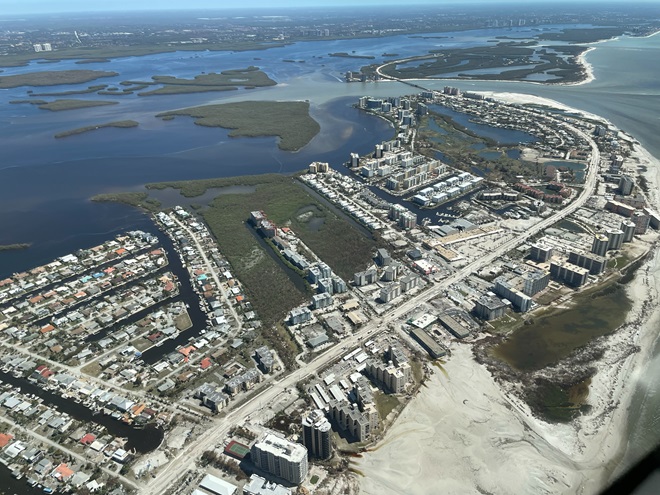 The south end of Estero Island on September 30. Photo by Brad Pierce.

Flying on September 30 over the devastated barrier islands near Fort Myers, Florida, Brad Pierce was looking for movement. A Cirrus SR22 pilot based in Orlando and longtime disaster response volunteer who has served, at various times over the years, both of the general aviation organizations that prepared responses ahead of the storm's September 28 landfall, Pierce flew the first post-storm mission for AERObridge, as other volunteers prepared for a general aviation airlift.

Pierce has volunteered for such duty for more than 20 years, and recalled, in a telephone interview, that small aircraft have filled critical gaps in broken supply chains, delivering insulin and other urgently needed medications to hospitals cut off from access to roads, for example. Arriving over the coastline and surveying the barrier islands where the storm did its worst, he soon realized that there would be no such opportunity to help this time.

It's not that Pierce ignored the boats and building materials piled up in heaps on (and beyond) storm-scrubbed barrier islands, or the inland flooding that was by then slowly receding. "My heart breaks for those people," he explained. But he was flying point for dozens of volunteers lined up and waiting to spring into action, and "AERObridge 8000" was focused on gathering intelligence on what, if anything, stood in the way of trucks reaching those who needed relief. That, in turn, would determine what role organizations including AERObridge and Operation Airdrop could play in rescue, resupply, and recovery. The destruction was obvious and dramatic, Pierce said, but "from an air response standpoint, it's less relevant."

Pierce focused on learning if people awaiting rescue or resupply could not be reached by other means. 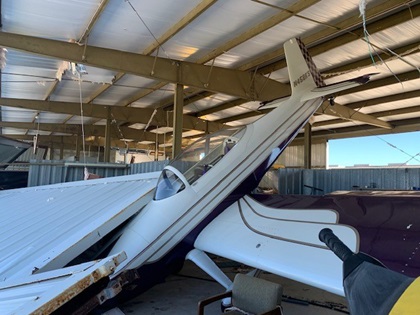 "I assessed at the time that they were kind of winding down the rescue type of operations," Pierce said three days after the damage assessment flight. He had his twin 17-year-old sons, Hunter and Landon, aboard to help with photography, and with keeping an eye out for traffic, though there was very little traffic in the air and flight restrictions in effect to protect U.S. Coast Guard helicopters and other aircraft conducting rescue operations and damage assessment. AERObridge had pilots signed up and waiting for the word "go," but Pierce effectively waved them off. With few exceptions, roads were open and vehicles were moving. Pierce knew from long experience in logistics, and a little "back-of-the-napkin math" that it would require about 320 flight hours flown by light aircraft to deliver the contents of a single truck, and those trucks were moving.

"The math starts to tell the story," Pierce said. "It's hard to justify 320 hours of flight time and cost and all the rest, versus what a truck could do."

Operation Airdrop opted to dispatch flights, noting that road delays were a factor, though that organization's airlift wound down quickly: Operation Airdrop announced on Facebook October 4 that it was canceling further relief operations. Operation Airdrop Executive Director Alex Clark said in an email October 3 that the situation was evolving, though his group had received different information about the status of Interstate 75 traffic delaying the arrival of supplies from Tampa. "We also are carrying time critical supplies such as hot food and medicine that is not possible via roads at this time," Clark wrote October 4.

"We appreciate all the amazing volunteers who signed up to help us with this mission (over 200 pilots and over 75 ground volunteers)," the group posted on Facebook the following day. "We were able to provide 10,000 hot meals, $15,000 in supplies through donations, 10,000 pounds in flight supply donations, and a significant number of orders through Amazon" during a three-day effort. 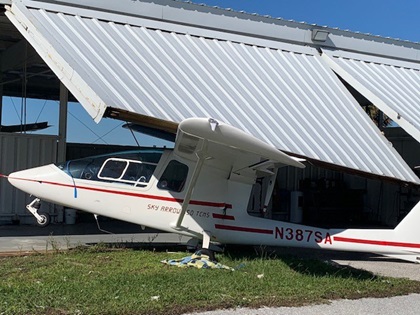 While roads were largely open within days of the storm's exit (with the notable exception of the causeway connecting Sanibel Island and adjacent Captiva to the mainland, and another that serves Pine Island), repair and recovery efforts for thousands of homes, schools, and businesses in and around Lee County were months or years away. By the afternoon of October 5, more than 164,000 Florida Power and Light Co. customers awaited restoration, 160,000 of them in Lee County, according to Poweroutage.us. The Associated Press reported that some schools in the region would remain closed indefinitely, classrooms still flooded with mud, staff coping with their own sudden homelessness. The state Department of Education expected 70 of the state's 75 school districts would be open for in-person instruction by the end of the week, while Sarasota County schools aimed to reopen some schools October 10, particularly schools in the northern part of the county that sustained less physical damage than schools closer to Lee County.

Airports in the hardest-hit areas reopened within days, thanks to no small effort by staff and volunteers who cleared debris from once-flooded runways. Many navaids remained out of service, along with other on-field facilities. Damage to hangars and aircraft was extensive, documented in photos from AOPA Airport Support Network volunteers who checked in after the storm, supplying photos of flooded runways and wrecked aircraft.

More than 100 storm-related deaths were reported, though the exact number varied between media accounts and official government tallies, and authorities had not ruled out that additional victims would be found.

The storm struck fear in the hearts of Tampa-area residents for days leading up to the first landfall, though forecasters noted more uncertainty than usual with the models. Pierce said AERObridge had eyed Ocala, Florida, about 70 nautical miles northeast of Tampa, as an expected staging base for relief operations. "We had FBOs lined up," he said.

The storm's turn in the final 24 hours before it struck Florida on September 28 shifted the worst of the wind and flooding about 80 nautical miles south of Tampa, a city that another resident pilot had fled ahead of the storm, only to find himself in chest-high water lashing a large propane tank to a support post as Hurricane Ian came ashore for a second time near Georgetown, South Carolina. 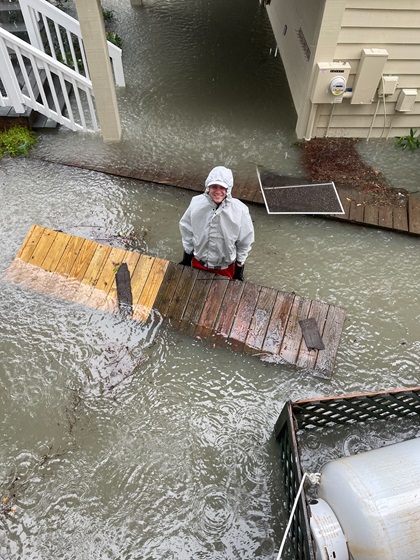 Cullen Moorhead, 20, a pilot approaching his commercial checkride and training for an airline career at Tampa Bay Aviation at Clearwater Air Park while working toward a degree from the University of South Florida, had just checked out in the flight school's Cessna 182 days before his instructor invited him via text to relocate the aircraft (with his mother and father along for the ride) out of what they expected to be harm's way.

While most of the other pilots relocated school aircraft to Georgia, Moorhead opted to take his parents to his grandmother's home on Pawleys Island along the South Carolina coast. The New York Times found him in the storm's aftermath, walking along a causeway leading back to the mainland, on his way to check and see if the car the family had stored ashore for safety had survived the hurricane's second landfall. Moorhead recalled in a video chat with AOPA that reporter Kellen Browning met him on the way out to the island, "seeing if he can talk to anyone and have any insight on the storm for people to share their stories. And I told him, ‘Well, I've got a hell of a story for you.’" 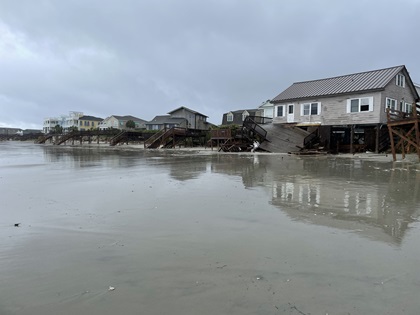 The family that fled Tampa wound up landing in the path of the storm, which redeveloped over the Atlantic Ocean after crossing Florida, turned west, and brought near-record storm surge flooding to Pawleys Island. Moorhead had been able to secure hangar space for the aircraft a few miles away. "The airplane never got touched," Moorhead reported, though he and his family spent a few lively hours coping with rising water that flooded the ground floor and nearly floated the propane supply away, prompting Moorhead and his father to work in chest-high water lashing the tank to a support post. He had yet to learn the car had remained above water by the time the newspaper found him.

Moorhead recalled a group text among the various pilots who had relocated school aircraft, most of them to Georgia, "a funny text saying, 'okay, everyone [is] planning on [returning to Clearwater] on Friday, except those of you who decided to fly into the path of the hurricane.' So, it was nice to see some humor there, but I'm just, I'm really happy that it all worked out."

Recovery to 'go on for years'

“We have a long road ahead of us,” the president said, pledging ongoing federal support for recovery efforts. "We’re not going to leave.”

While recovery operations were ongoing, they moved at a faster pace away from Lee County and surrounding communities.

The National Business Aviation Association announced September 30 that the Business Aviation Convention and Exhibition would proceed as planned starting October 18 in Orlando, noting area airports had not been significantly impacted by the storm.

AOPA leaders, after consulting with staff and volunteers preparing for a November 4 and 5 fly-in event at Tampa Executive Airport, opted to proceed with the plan, pending further evaluation. "AOPA will continue to monitor the situation in south Florida and will adjust if conditions warrant," the association announced.