Get the app Get the app
AOPA will be closing at 2:30pm ET Wednesday, November 23rd, and will remain closed Thursday and Friday in observance of the Thanksgiving holiday. We will reopen Monday November 28th at 8:30am ET.
AOPA Members DO more LEARN more SAVE more - Get MORE out of being a pilot - CLICK HERE
News & Media Business meetings and bedtime routines

“Mommy’s home!” my three-year-old son exclaimed. It was past his bedtime, but I didn’t mind. I had flown from Ohio to AOPA headquarters in Maryland and back the same day for some meetings and had made it home to hear about my son’s morning at preschool and tuck him in for the night. 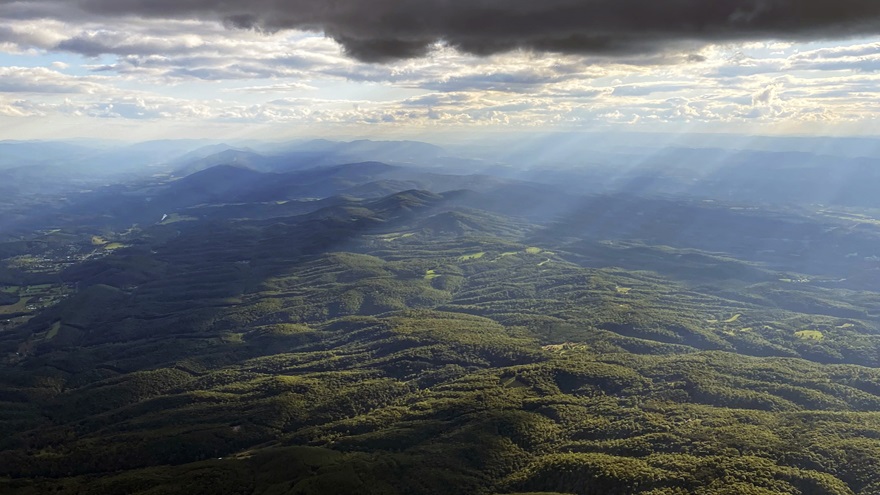 A broken layer over the mountains produced spectacular sunbeams along the route between Ohio and Maryland. Photo by Alyssa J. Cobb.

For years, I have read about the utility of general aviation as a business tool that allows pilots to attend meetings and other functions while making it home for things like ballgames and recitals. Most of the aircraft I had read about were high-performance piston aircraft, turboprops, or jets. I fly a VFR-only 145-horsepower 1953 Cessna 170B, typically for fun, but lately I’ve been testing its utility, using it for family and some business trips.

When I had the opportunity to brief members of AOPA’s Board of Trustees, I wanted to spend the day at headquarters to meet in person and work on some other projects to maximize my time in the office. I live near Columbus, Ohio, so going by airline (driving to the airport, going through security, the short airline flight to Baltimore or Washington, D.C., getting an Uber to Frederick, and so on) would take longer than driving and be more expensive. Driving takes five to six hours, one way, and is the way I travel if the weather is bad. Driving or taking the airlines would require a hotel stay. The forecast looked promising, with marginal VFR conditions predicted to lift to VFR across my route early that morning, so I planned to fly myself round trip and avoid the cost of a hotel.

The morning of the flight, I woke my son up early and helped him get ready for preschool before heading to the airport. My six-month-old daughter was still sleeping, but I kissed her goodbye. My husband, a pilot who works in the aviation industry, is very supportive of our use of GA. He had rearranged his workday to drop off and pick up our son from preschool, get our kids’ meals, and do their bath times.

Thanks to a booming tailwind, I enjoyed a two-hour commute to work with broken clouds blocking the worst of the rising sun yet allowing sunbeams to burst through. The sky cleared completely as I approached Frederick Municipal Airport. After landing, I tied down, and made it in for my first meeting of the day. Now that was a relaxing commute!

I worked almost an entire normal workday in the office, meeting with the board and working on a product review with one of our videographers. At 5 p.m., I shifted gears to head home, this time with a booming headwind. My goal had been to make it home before my kids went to sleep, but I wasn’t sure if it would happen with the three-hour flight ahead of me. (Our kids’ bedtime is around 8 p.m.) I also wanted to ensure that I was across the Appalachian Mountains and foothills before dark.

Again, sunbeams dominated the flight, and I enjoyed a gorgeous sunset about 15 minutes before landing at my home base, Fairfield County Airport. The peaceful flight allowed me to decompress from the day and reflect on the possibilities that that GA travel opens.

I shut down at 8:04 p.m., hurried to pull the airplane in the hangar, and called my husband to see if our children were still awake. Our daughter was in the process of falling asleep, but our son was still up. I asked my husband to let him know I would be home in 15 minutes if he could stay awake. I’m not sure who was more excited when I walked into my son’s bedroom—me or my son. We chatted about preschool and said our bedtime prayer, and I sang him to sleep. Then, I kissed my sleeping daughter goodnight.

Few get to really experience the utility of GA—I never really thought I would with a slow taildragger. Granted, 5.5 hours of flying on top of a regular workday made for a long day, but the cooperative weather and ability to balance work and family life made this trip something I treasure and hope to repeat more often.