Get the app Get the app
AOPA Members DO more LEARN more SAVE more - Get MORE out of being a pilot - CLICK HERE
News & Media Air race pilot mourned, Reno races suspended

The Stihl National Championship Air Races in Reno, Nevada, ended in tragedy on September 18 when air race competitor and 2021 Rookie of the Year Aaron Hogue, 61, was killed piloting the number 29 jet, an Aero Vodochody L–29 Super Delfin, during the final Jet Gold race.

Hogue's L–29 Ballista was closely matched heading into the final heat with another L–29 flown by Peter Stavrides. The two were separated by a fraction of a second going into the race and were running neck and neck in the third lap. Rounding a gate, Hogue eased out of the roll and began to climb, which the announcers remarked as unusual. Suddenly, the L–29 stopped climbing and rolled right, veering away from the course, then back to the left, but the nose had dropped and the jet maintained a shallow descent, left wing low, into the ground.

“We can confirm that during the Jet Gold Race on the third lap there was a fatal incident at Outer Pylon 5 today,” the Reno Air Racing Association wrote in a statement posted on social media. “There will be an investigation conducted by the NTSB (National Transportation Safety Board) and the FAA (Federal Aviation Administration). All other pilots landed safely and race operations for 2022 have been suspended.” 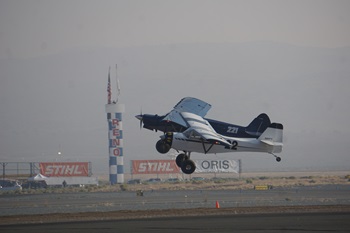 The popular and crowd-pleasing STOL Drag races at Reno this year were sponsored by AOPA, a contest of speed and short-field technique combined.

The race is unique in that it features “two aircraft flying side-by-side as fast as they can down a 2,000-foot straightaway, land, and turn around and race back to land at the finish line,” explained Quinn.

The “world’s fastest motorsport,” as the long-running event is billed, is not new to tragedy. In 2014, USA Today reported that “in the 51-year history of the Air Races, 19 pilots have died during racing.” Others have lost their lives preparing to race, including Sherman Smoot, a race pilot who was killed during a test flight on September 2. Race aircraft were decorated this year with tributes to Smoot.

The deadliest event occurred in 2011 when air race pilot Jimmy Leeward and 10 spectators were killed after Leeward’s highly modified North American P–51D Mustang Galloping Ghost crashed into the crowd after a trim tab failure made the aircraft impossible to control.

The devastating end to the 2022 races topped an already disappointing week due to a low spectator turnout as well as low visibility from wildfire smoke.

“We can’t see the pylons a quarter mile in front of us,” said Unlimited Gold Hawker Sea Fury race pilot Bernie Vasquez. “It’s one thing to go out there and qualify like that by yourself…but if we’re going to have six airplanes all in the same area going for the same pylon, it’s just not safe.”

Despite smoke being in the forecast and the overall risky nature of the sport, Vasquez says he keeps coming back to Reno because “it’s like a family reunion. I’m 43 years old, I’ve been doing this for 25 of those 43 years so these people are as close to me as my family, family.”

Another group of longtime air race supporters and spectators are Reno locals Peggy and Jeff Kreck. “The first race we came to Bob Hoover started it. It was so cool hearing him say, ‘Gentlemen we have a race’… and I just love the noise.”

Although the future of the races may be uncertain, air race pilots are looking forward to seeing the next generation take flight at Reno. “We’re bringing up a whole new generation now,” said Vasquez as he watched young Owen Swager pedal away in his Dreadnought pedal plane. “I’m no longer a kid in this, I’m now one of the old guys, I’m not taking it very well, but it is what it is. There’s a whole new generation we’re looking at.”