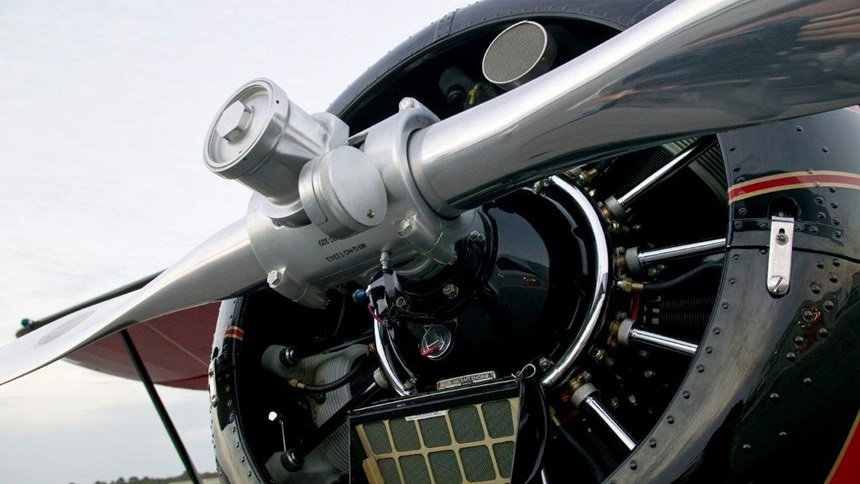 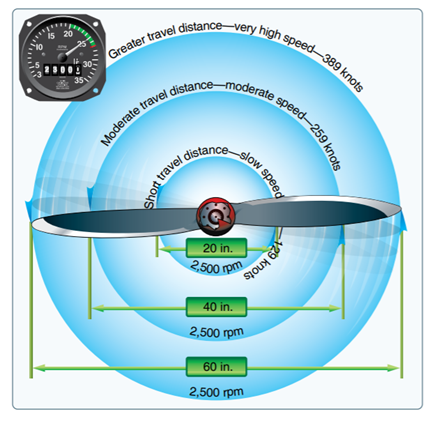 On takeoff, propeller tip speeds approach the speed of sound. The blades must absorb not only the punishing vibration of the engine’s power pulses, but also vibration caused by the oncoming airstream. Centrifugal loads—those forces that try to pull the blade out of the hub—amount to 10 to 20 tons per blade.

The blades twist and flex. The stresses imposed on the prop are more concentrated in the small areas that are nicked or cut. These nicks and scratches act as stress risks, which can weaken the blade enough to eventually cause it to fail.

When an engine quits, the airplane can glide to a safe landing. When a propeller blade is lost, the resulting imbalance can tear the entire engine from the aircraft, putting the center of gravity far beyond limits and rendering the aircraft uncontrollable.

The root cause of mechanically induced accidents is almost always neglect.

Although accidents and human injuries from propellers are not widespread, they are serious, and most are easily avoidable.

Prop accidents break down into some general groups:

The root cause of mechanically induced accidents is almost always neglect.

Working Around the Propeller

Because it is attached to the engine, the propeller deserves respect on the ground. The single most important concept you should understand is this: Always treat the propeller as though the ignition has been left on and the engine is just a hairsbreadth from starting. Even though most pilots are careful to occasionally check that the mags properly shut down the engine, not all do. Assume the worst and you’ll never be surprised.

Periodically ensure that your magneto’s p-leads have not broken—this is a good defense against unexpected starts on the ground. These leads, which are connected to the ignition (or magneto) switch in the cockpit, are responsible for grounding the mags to keep the engine from running. Sometimes the wires or connections between the switch and the magnetos break or come loose. In this case, one or both mags may be “hot,” or ready to deliver spark whenever the prop is turned. 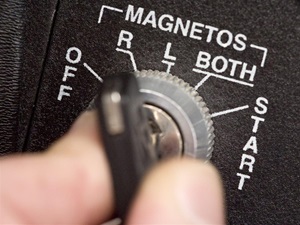 To test them, instead of shutting down the engine in the usual manner with the mixture control, use the key. Allow the engine to cool normally and idle down. Move the key slowly through both Right, Left, and then to the Off position. The engine rpm should drop slightly at both of the individual mag positions and shut down completely in the Off detent. Allow the prop to stop and then move the mixture to the idle-cutoff position. Do not try to “catch” the engine before it comes to a stop because a dangerous backfire might occur. If the engine does not stop when the key is in the Off position, shut it down with the mixture, prominently mark the prop as being “hot,” and contact maintenance personnel immediately.

Always treat the propeller as though the ignition has been left on and the engine is just a hairsbreadth from starting.

When in the vicinity of the prop make sure to:

Never attempt to load or unload the airplane with the engine running unless there are significant extenuating circumstances. If you must allow passengers or crew to board or otherwise approach the airplane, be certain that they understand the areas to avoid. Keep your hand on the mixture control and monitor the movement of the individuals without fail. If someone begins to walk in the direction of the spinning prop, kill the engine immediately. Worry about how to restart it later. Remember that passengers are unlikely to hear your cautionary shouts over the engine. Almost every year, there are injuries or fatalities from someone walking into a turning prop.

The pilot of the Cessna 150 stopped at the terminal after a local flight. A person standing on the ramp came over to the airplane and talked to the pilot through the open door. The engine was left idling. After the conversation had concluded, the bystander waved goodbye and walked into the propeller, sustaining serious injuries.

The pilot of a Piper Comanche (PA-24-250) was struck in the head and elbow by the propeller as he was attempting to start the aircraft in cold weather. The pilot’s operating handbook suggests pulling the prop through four to six times before attempting a cold weather start, but in this case the pilot had already tried to start the airplane without success. Leaving his non-pilot passengers on board, he exited the aircraft to pull the prop through but neglected to ensure that the magneto switch had been returned to the Off position. 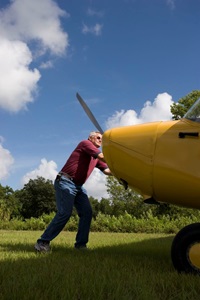 We’re not going to tell you how to hand prop an airplane because it is best learned in person, not from this safety spotlight.

If you already know how to hand prop, remember to secure neckties, silk scarves, and loose clothing. Remove rings, watches, and bracelets, and have a qualified person at the controls.

In this Real Pilot Story find out how a hot magneto and pilot complacency converged at the wrong time. It's a good reminder of why we, as pilots, should always handle a propeller as though it will turn over unexpectedly, because it might.