Get the app Get the app
AOPA will be closed July 4th, in observance of the Independence Day holiday. We will reopen at 8:30 am ET on Tuesday, July 5.
News & Media Hangar project confirms airport's turnaround 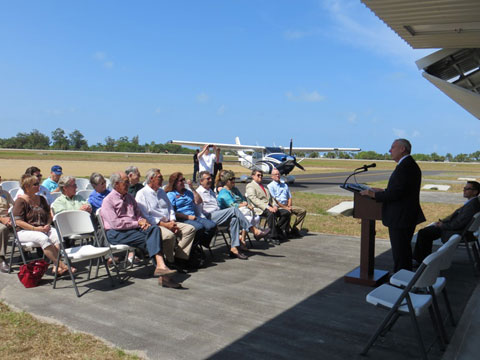 Airport advocates in Venice, Fla., are welcoming completion of a $1.15 million hangar facility as strong evidence that a turnaround that began at the airport last year is gaining momentum.

Venice city officials on April 20 announced the completion of the hangar project—largely funded by three Florida Transportation Department grants totaling $920,000. The balance came from the Venice Municipal Airport enterprise fund. The hangar facility has a capacity to store up to eight general aviation aircraft

In announcing the project’s completion, city officials highlighted the airport’s economic self-reliance, and its ability to increase its revenue-producing capability.

“The airport does not use ad valorem property tax revenues, but instead raises its revenues from airport property rentals and other sources such as fuel flowage fees and special event fees. The hangars, which are already reserved, will provide about $45,000 a year more for the Airport Enterprise Fund,” said the news release about the project.

The announcement noted that the airport, constructed in 1942 as a World War II training facility, was deeded to the municipality in 1945 “with the stipulation it be used for aviation or revert to the federal government.”

About 300 people are employed at various businesses on the airport grounds, it said.

AOPA reported in June 2011 on city council action to approve an airport master plan layout and capital projects. Those votes served to confirm that a new pro-airport tone had replaced a political climate in which airport development—including projects such as the construction of larger hangars—had long been stymied.

The arrival on the scene of a new airport director, Christopher Rozansky, was also seen by airport advocates as a positive step.

The upbeat tone was reflected in the city’s announcement of the hangar project, which described the airport as “one of the gateways to the city, providing access to the area for tourists and businesses, which in turn visit Venice shops and restaurants.”