Get the app Get the app
Already a member? Please login below for an enhanced experience. Not a member? Join today
News & Media Wanted: Kirby Chambliss?

A police officer with his radar gun trained on the Texas highway looks up and does a double take. Stepping out of the car, he clocks incoming traffic at 230 mph. Kirby Chambliss’ aerobatic Zivko Edge 540 showplane makes a low pass over the highway, sending the officer scrambling for cover.

Chambliss roars past the Dallas skyline with a helicopter in pursuit.

“Aircraft over Dallas, this is Texas State Police. Identify yourself,” says the helicopter pilot.

Chambliss dodges the Texas Star Ferris wheel at Fair Park, whizzes under a bridge, uses trees as chicanes in the Trinity River Bend, and buzzes police vehicles with sirens blaring on his way to the Texas Motor Speedway in Fort Worth. If the high-speed chase seems worthy of Hollywood, that’s because it’s a promotional video for the Red Bull Air Race World Championship, which comes to Texas Sept. 6 and 7. Chambliss is no fugitive—he’s a native Texan coming home for the competition.

As with most on-screen shenanigans, the illusion of lawlessness had to be cleared with the appropriate authorities. Chambliss said the plan for the pass under a bridge originally involved a larger bridge, but that would have meant closing the bridge to traffic; instead, the filming team chose a bridge that was under construction and flew over a weekend when no one was there. That bridge presented its own challenges: Chambliss said that he approached in a turn and leveled the wings just before passing under the bridge, and had to avoid obstacles near the structure.

But what’s a bridge to a two-time Red Bull world championship winner? Chambliss said he’s flown under “probably a thousand bridges,” including the narrow shot under the Chain Bridge in Budapest when the Danube was high.

Chambliss keeps a rigorous schedule of airshows and Red Bull races, and so he sent people down to Texas before he arrived to scope out the landscape and come up with ideas for the routine. In filming video routines, the director has an idea of what will look best on camera, too, he said, but Chambliss always makes the final decision on what he’s comfortable doing—directors don’t understand the airplane still has to fly.

Others were less familiar with the capabilities of the Zivko Edge 540 and its pilot: Chambliss said he heard that there were hundreds of 911 calls about the airplane that morning.

Chambliss spoke with AOPA shortly after returning from the second race of the series, in Rovinj, Croatia, where pilots faced unpredictable conditions. Chambliss hit a pylon on the course, resulting in a “did not finish,” but will have another shot at the podium in Putrajaya, Malaysia, May 17 and 18. The races returned in 2014 after a three-year break, during which time a number of changes were implement to increase safety. The new races are a different experience for the two-time championship winner and seven-time competitor, who is known for an aggressive style of flying. Among the maneuvers eliminated is the high-G 270-degree “Quatro” turn through a set of four pylons.

“For me, I really liked that one, and I could usually make up a little bit of time,” he said. But he acknowledged that the changes area all in the name of safety.

The 2014 series’ two U.S. stops may give Chambliss a break from jetlag—racers may stay in a city for less than a week for the events, some of them halfway around the world—but he said support from a hometown crowd can be “a double-edged sword.” It’s great, he said, but it can also be a distraction as the pilots try to focus on the race.

For the first time in the United States, both stops in 2014 will take place in speedways, Texas Motor Speedway and Las Vegas Motor Speedway. Chambliss said the new setting will be exciting for spectators.

“You’re not used to looking down on the airplanes,” he said. “… I think it’s something you don’t want to miss, for sure.”

The September event will be the Red Bull Air Race series’ first foray into the Dallas-Fort Worth area, which is notable for Chambliss, a Texas native who now lives in Arizona. As the video, which is making its way through social media with the hashtag #CatchKirby, concludes, the police officer lands at the speedway, where Chambliss’ airplane is surrounded by vehicles with flashing lights. Instead of arresting the supposed fugitive, he welcomes him home.

“That was kind of a natural thing, I think,” Chambliss explained. 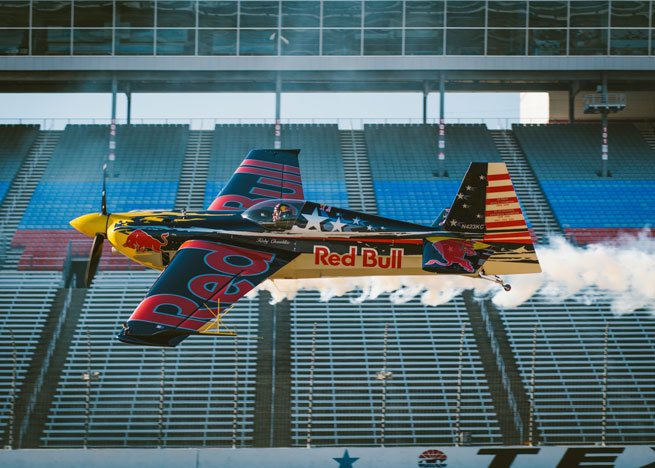