Get the app Get the app
AOPA will be closing at 1:45pm ET on Tuesday, December 6th. We will reopen Wednesday morning at 8:30am ET.
AOPA Members DO more LEARN more SAVE more - Get MORE out of being a pilot - CLICK HERE
News & Media HondaJet creator honored

When HondaJet enters service in 2015, its designer will have already amassed a significant number of honors and accolades, the most recent announced Aug. 19 by SAE International. The organization represents 145,000 automotive and aerospace engineers, and will bestow on Honda Aircraft Co. CEO Michimasa Fujino (who led the HondaJet design effort) a design innovation award named for longtime Lockheed designer and executive Clarence (Kelly) Johnson.

The award to be presented in September is the latest honor for Fujino related to the HondaJet, which is in certification testing with deliveries expected to commence in 2015. Fujino has received similar honors from the International Council of Aeronautical Sciences (this year), the American Institute of Aeronautics and Astronautics in 2012, and the Japan Society for Aeronautical and Space Sciences in 2004. Aviation Week and Space Technology also recognized Fujino in 2008.

HondaJet’s over-the-wing engines contribute to its high efficiency, among several patented features and innovations that increase speed and reduce fuel consumption, along with natural laminar flow wings and composite construction innovations that have been praised and singled out by these various organizations, including SAE International. 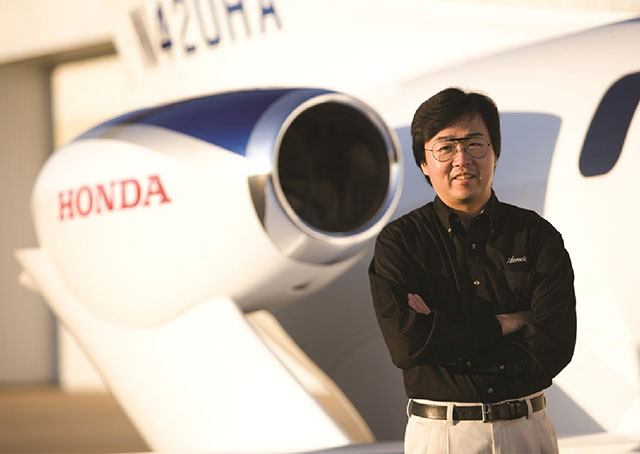