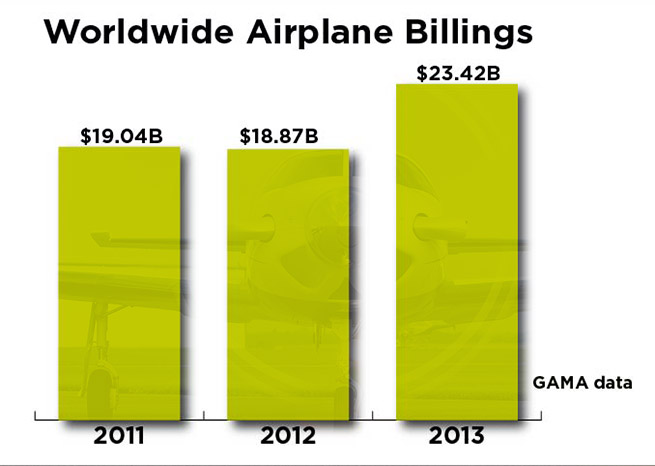 The General Aviation Manufacturers Association reported the numbers with a press conference Feb. 19, with leaders focused on long-term efforts to increase innovation and safety, and reduce regulatory burdens that have stifled both.

While big-ticket business jets continue to drive the lion’s share of revenue increases for 2013 (evidenced clearly by the contrast between a 24-percent revenue increase and an increase in airframe deliveries just short of 6 percent), there are signs of progress in piston and turboprop aircraft as well: Single-engine piston deliveries increased 5 percent, multiengine piston deliveries climbed 12 percent, and turboprop deliveries increased 11 percent, according to GAMA data compiled through a survey of aircraft makers.

Gulfstream Aerospace Corp. of Savannah, Ga., began delivering the G650 in December 2012, and rode that new model to the top of the industry, logging $7.4 billion in total sales for 2013, an 81-percent increase. The G650, G550, and G450 models account for 121 of Gulfstream’s 144 total deliveries for 2013, and propelled Gulfstream (a General Dynamics subsidiary) past Bombardier in the bizjet segment: Bombardier logged $6.3 billion in sales, though the Canadian company delivered more total airframes, with 180 deliveries for the year. The shift in revenue marks the first time since 2003 that Gulfstream has led the business jet market, said Richard Aboulafia, vice president of analysis at the Fairfax, Va.-based Teal Group. 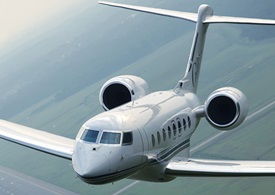 “Throwing dozens of $70 million jets into the mix definitely pushes the market up,” said Aboulafia, who estimates that the G650 alone accounts for 42 of Gulfstream’s 2013 deliveries.

Cessna, meanwhile, took a tumble. Perhaps eager to shift the focus away from a decidedly down year, Cessna announced Feb. 18 the first flight of the new Citation Latitude prototype, one of the new models in development that some analysts expect will reestablish the Wichita, Kan., company’s place at the top of the bizjet world, at least in terms of aircraft delivered, if not revenue.

“They’ll get back in the seat of delivering the most units every year,” said aviation analyst Brian Foley of Brian Foley Associates in Sparta, N.J. Foley also expects Bombardier to eventually reclaim the overall revenue crown; Aboulafia agreed that will happen, but said Gulfstream will hold the crown for a while. 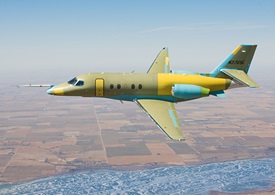 "It’s not a fluke," Aboulafia said of Gulfstream's success. "They’re going to stay on top until the (Bombardier) Global 7000 and 8000 arrive."

The increase in total business jet airframe deliveries, just shy of 1 percent, was a surprise to most analysts, Foley said. Given the continued softness in demand for light and mid-sized jets, the sector was expected to decline, not hold its ground—and would have, if not for a particularly strong showing by the G650.

Cessna’s woes were not limited to soft jet sales: The company saw piston aircraft deliveries slip from 283 to 206 between 2012 and 2013, while Cessna’s turboprop sales held nearly steady, down from 107 deliveries to 105.

Cessna’s upcoming Longitude “will help in the later decade, but other than that they’re a prisoner of the broader market reality,” said Aboulafia, adding that global economic conditions, and credit availability, will dictate the future success or failure of aircraft makers more than any other factors. There is some good news on that front, if only in the absence of more disastrous news.

“There are solid reasons to think that we’ve hit rock bottom,” Aboulafia said, noting that the inventory of used business jets is declining, and economic growth and easing credit in the U.S. offers reason for optimism. 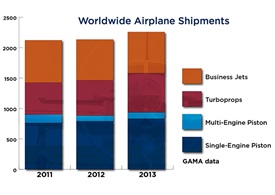 “Down in the sector below 12,500 pounds in pistons, turboprops, and light jets are where we’ve got to do some innovation,” Bunce said, noting that such efforts are “starting to come to fruition.”

AOPA, the National Business Aviation Association (NBAA), GAMA, and other organizations continue to collaborate with the FAA and national aviation authorities, working toward global certification standards and regulations, Bunce noted.

“This is a journey that we’re on that we’re very serious about,” Bunce said. 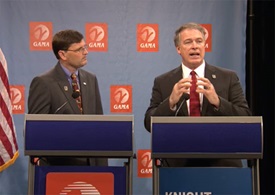 While Cessna stalled, Beechcraft Corp.—poised to become a fellow Textron subsidiary pending regulatory approval of a $1.4 billion deal announced in December—was quick to highlight its successful 2013, issuing a Feb. 10 press release noting a 52-percent increase in airframe deliveries across the King Air model line. Beechcraft saw an even larger percentage increase in its Bonanza and Baron piston lines, with 70 of those models (35 of each) delivered in 2013, a 94-percent increase.

"In addition to the impressive full-year delivery numbers, we saw our highest booking rates in years and had solid revenue from servicing Hawker and Beechcraft aircraft in both the commercial and military segments,” said Beechcraft CEO Bill Boisture, “It’s safe to call our first year as a standalone company a success.”

"Overall, Piper continued to meet delivery and financial projections for the year, despite economic challenges in many countries," said Piper President and CEO Simon Caldecott in a news release. "The economics of our single-engine aircraft and our line of sophisticated and proven training aircraft is compelling to many aviators and pilot training institutions around the world."

Cirrus Aircraft also posted an upswing, logging a 9-percent increase in airframe deliveries and a 30-percent increase in billings for 2013, according to GAMA data. That reverses a slight decline seen in 2012, and reflects one of the highest year-over-year percentage increases in revenue in the general aviation market. Embraer posted a nearly identical increase in revenue, on a percentage basis, and nearly caught Cessna in total business jet deliveries, with 119 business jets sold compared to 139 deliveries logged by Cessna, which dropped to third place in terms of business jet deliveries.

Aboulafia said the overall numbers, particularly in the lower-cost aircraft, remain “pretty grim,” reflecting a market that continues to be “ripped in half,” with big-ticket aircraft far outpacing smaller ones.

Aboulafia said the coming certification overhauls, a generally more favorable legislative and regulatory climate, and the ongoing development of new piston fuels, and the promise of innovation that should follow are “good to have, very welcome, but the fundamentals of this industry are determined by economic growth and credit availability. That’s really what matters.”

Aboulafia said there is reason to be encouraged, particularly by the U.S. economy and credit market.

“I feel good about the trends,” Aboulafia said. “On the other hand, we’ve seen false starts before.”

“Let's quit being cautiously optimistic and get that behind us,” Foley said, echoing a phrase used by Bunce in GAMA’s news release. “We’ve turned the corner. It’s clearly moving in the right direction, now.” 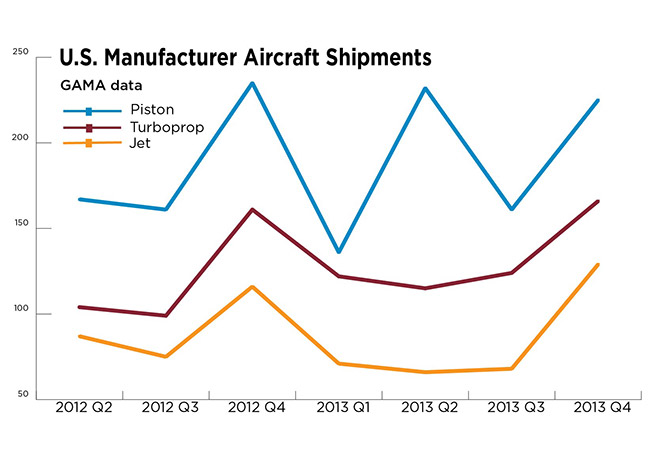