Get the app Get the app
Already a member? Please login below for an enhanced experience. Not a member? Join today
News & Media Aviation CEOs report growing optimism 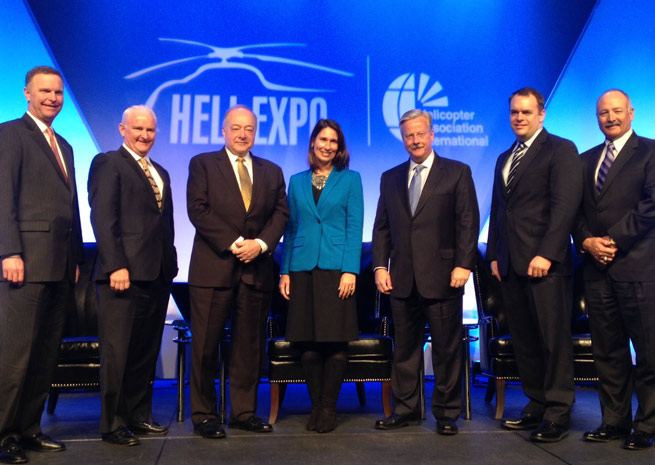 A chorus of industry leaders sang the praises of general aviation while admitting to challenges ahead in dealing with FAA bureaucracy and changing cultural whims. Hosted by Matt Zuccaro, president of the Helicopter Association International, the CEOs of the major aviation associations reported improving conditions in most sectors of GA.

At Heli-Expo 2014, HAI's annual convention Feb. 24 through 27 in Anaheim, Calif., Zuccaro noted that the show was off to an encouraging start with some 1 million square feet of exhibit space in use, 60 helicopters on the floor, and attendance tracking toward 20,000, which would rival last year's event in Las Vegas.

The helicopter industry has weathered the economic downturn better than some other sectors, helped in part by strong military sales in recent years. However, the U.S. military is facing significant cuts, which will affect many manufacturers.

The business aviation segment started 2014 in a relatively positive mood, according to Ed Bolen, president of the National Business Aviation Association. His members are experiencing growing optimism and seeing increased fuel sales. He pointed out that the most current congressional term has been positive for GA, with the passage of the Pilot's Bill of Rights, reasonable funding for the FAA in the latest reauthorization, and other legislation supportive of GA. However, talk of lengthening depreciation schedules for GA as part of tax reform is disturbing. He noted that GA must participate in the ongoing discussion about potential privatization of air traffic control, an issue that had been dormant in recent years, but is once again under consideration. With more than half of the House of Representatives in the GA Caucus and 40 percent of the Senate, congressional support is strong.

Meanwhile, GA is under threat from regulatory agencies, according to AOPA President Mark Baker. The association is ever-vigilant to protecting the rights of pilots, especially when it pertains to recent warrantless stops of pilots by Customs and Border Protection agents far from the U.S. borders. Working with members of Congress, the association has used Freedom of Information requests to try to understand CBP's goals, a process still under way. The FAA's recent plan to require sleep apnea testing is another example of agencies not focusing resources on issues that will make a difference in improving GA safety and supporting pilots. The FAA has backed off on the plan, due, in part to AOPA's strong response and congressional support. Baker said he expects to hear from the FAA soon on the two-year-old petition that AOPA and the Experimental Aircraft Association placed to eliminate the requirement for a third-class medical certificate for some types of operations. Again, a separate legislative solution has been proposed that is even broader than the petition.

Jack Pelton, chairman of EAA, also addressed the petition, noting that a decade's worth of light sport aircraft flying has shown that pilots can operate safely without a medical certificate. One of EAA's goals is to help young pilots create a career path in aviation—an effort to address what has been called a pending pilot shortage. 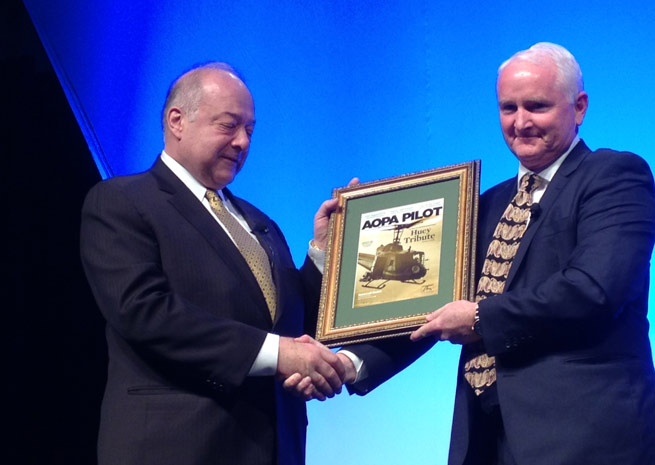 NTSB Chairman Deborah Hersman joined the CEOs on stage to address helicopter safety issues. She praised HAI's role in working with the board, noting Zuccaro's recent "Land and Live" initiative, which encourages helicopter pilots to use their biggest asset—the ability to land about anywhere—as a means to increase safety. Whether facing worsening weather, fuel problems, or other issues, pilots should know that it is OK to land short of the planned destination—and to do so knowing they won't face repercussions from the FAA, their boss, or anyone else. Among Hersman's desires for the helicopter industry are greater use of flight data and cockpit voice recorders and other types of flight monitoring in order to improve safety.

At the event, Baker presented Zuccaro with a framed copy of the cover of the March issue of AOPA Pilot, which features a Bell Huey helicopter. Zuccaro flew the Huey in Vietnam and afterward, lead him into a career in helicopter aviation.

Editor in Chief
AOPA Editor in Chief Tom Haines joined AOPA in 1988. He owns and flies a Beechcraft A36 Bonanza. Since soloing at 16 and earning a private pilot certificate at 17, he has flown more than 100 models of general aviation airplanes.
Go to Thomas B Haines's Profile
Topics: Advocacy, Helicopter Association International, Aviation Organizations